Some simple thoughts on grace

In June the Pacific Northwest Quaker Women’s Theology Conference will gather women from Canadian, North Pacific and Northwest Yearly Meetings at a retreat center in Oregon. This will be my first time, and I’m looking forward to the experience.  This year’s theme centers on grace.  I find myself pondering grace a lot these days, asking, among other things, about the Quaker perspective on grace.

As preparation for the conference, we were asked to write a short essay on grace and submit it to the conference web site.  Here’s my offering:

Last Saturday we began an all-day elders retreat with an eclectic contemplative exercise.  I find the combination of traditions grace-filled. In this case we combined the medieval labyrinth walk with Ignatian prayers of examine and a dab of Quaker silence thrown in.  On the way in to the center of the labyrinth we meditated on the desolations in our lives (all that currently separates us from God), and on the way out we pondered our consolations.

The desolation that quickly came to mind was disappointment in my lack of vocational discipline—my inability these days to write or pray with any regularity. I’m disappointed in myself.  And I can’t help but feel that God is also disappointed in me. Instead of letting the deep joy of these callings energize me, I’ve become strangled by guilt at my lack of productivity. As I walked I confessed and lifted this up to God.

Even before I reached the center, I sensed the quiet voice of Jesus saying simply, “My grace is sufficient for you.”  I felt his smile and began to relax from the inside out.  He reminded me that it’s not what I do for him that gives me value.  He loves me.  As I am.  And his grace is all I need.

“My grace is sufficient for you, Nancy.  Follow me.”

And I was reminded that not only is God’s grace sufficient, but that “There are no limits to the grace of God, who will make sure you will always have enough of everything and even a surplus for good works.”

I know I will continue to struggle with feelings of inadequacy and the pressure to be productive. I’m a child of my culture. But on a deeper level, I’m a child of God, and I’m growing in grace and in the knowledge of Jesus.  That’s my hope as I walk the very real labyrinth of life.

In the next few weeks, I will continue to ponder and post thoughts on grace. I invite responses as I explore a Quaker theology of grace. Non-Quaker responses are, of course, welcomed.
Posted by Nancy Thomas at 7:36 AM No comments:

Spoken by Ivan in The Brothers Karamasov by Fyodor Dostoyevsky.
What a relief to know that.
Posted by Nancy Thomas at 7:02 AM No comments:

One afternoon last week, as Hal was taking our bicycles out of the garage, a woman pushing a stroller stopped and asked for directions to the nearest park.  Two other kids ran around the stroller, while the baby eyed Hal suspiciously.  The woman was new in town, and the kids obviously needed somewhere to release their energy.  Inspired, Hal told her that he and I were just about to go bike riding, and why didn’t we all go together to the park.

I came out, met our new neighbor, and off we went.  It turns out that the woman had just moved in with her boyfriend, and that the kids were his grandchildren.  I expressed surprise; she looked young enough to be their mother. She actually had children and grandchildren of her own, living elsewhere.

I was glad we accompanied them, as one part of the route had us walking a narrow sidewalk down a busy avenue, and the kids were apparently glad to be out doors and on the loose.  We made it safely to the park and spent the rest of the afternoon together.  Hal and I bonded with the two older kids as we rode bikes together and played on the swings.  The baby, however, never stopped scowling at us.

Near the end of the afternoon, four-year-old Anabel, looked at me sweetly, head cocked to one side, and asked, “Why do you look so old?”

I wasn’t prepared for that. I don’t remember how I responded. I probably just laughed. But the question keeps circling in my mind. Actually, it makes me chuckle. But it’s also forcing me to examine my values, especially in light of a strong cultural pressure to look as good and as young as possible. I’ve been feeling that pressure ever since I was 13 years old, although for a while there I wanted to look older than my age.  As I grew up, married, and raised my children, my experience has mostly been that of my new neighbor. I’ve taken pride in all the times people have said things like, “That’s impossible! You look too young to have kids that old!” Or, “You? A grandmother? You certainly don’t look it.” For some reason this has always affirmed my value as a person.

People don’t say that so much anymore.  Wonder why.  But Anabel’s comment was a first. Well. Thanks be to God for a sense of humor. I guess I can see this as a good opportunity to realign my values with those of God’s Kingdom.

I hope I run into my young-looking neighbor again.  I probably will since they live close by.  I wonder what helpful thing Anabel will say to me next.
Posted by Nancy Thomas at 7:02 AM 1 comment:

Last year my friend’s house slid down the hill.  Her name is Petrona and we’ve known each other for 40 years. Our toddlers fought together, later learned to be friends and tell each other secrets. We’ve laughed together, told our own secrets, prayed for each other, and kept up our friendship even when it had to be long distance.  I was able to spend some time with her again last month during our visit to La Paz.

Yes, her house slid down the hill and was completely destroyed, along with several hundred other homes in the hilly barrio of Kalapa on the outskirts of La Paz. Unseasonable rains moved the sandy soil and an entire zone was wiped out. Fortunately there were several weeks’ warning and people were able to move their belongings.

Petrona currently lives in a refugee camp, a temporary village of small wooden structures put together by World Vision. The Bolivian government has promised a small parcel of land to each family that lost their home. The “village” is clean and orderly, with a communal well, bathrooms and a meeting place. The neighbors have organized a small city council.  Petrona has built a tin lean-to kitchen behind her room and settled in for the duration.

Separated from her husband (also our good friend), Petrona lives alone but keeps in touch with her daughters by cell phone. She has managed to get a clerking job in a sporting goods store in the rich section of the city and spends several hours a day in city buses going to and from her work. She likes being busy.  It keeps her mind off her problems.

We embraced, laughed, even shed some joyful tears at our meeting. The hour went by all too quickly. We prayed together before I left, knowing much time would pass before our next meeting.

I’m home again, and it’s Holy Week.  I’m thinking a lot about Petrona, about the differences in our situations. And about all the shared experiences that continue to bring us together. But I can’t get it out of my mind that my friend lives in a refugee camp and I in a condominium.  What a strange world.

Lord, have mercy on us all. 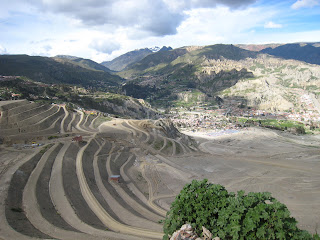 Terraces where there used to be houses 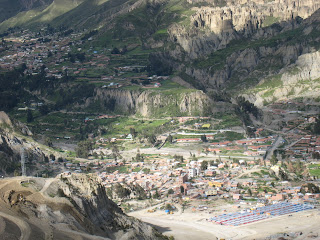 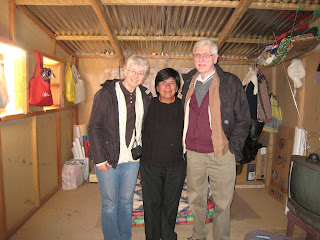 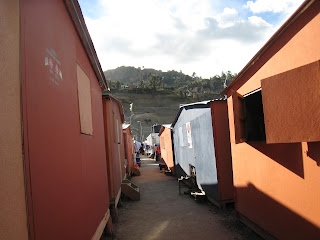