Most people are delighted that American football has returned to George Fox University. I haven’t heard many observations on the irony—or the appropriateness—of this violent sport erupting in a Quaker setting.
Speaking of irony, it’s strange that I should be writing this. I’m the coach’s daughter. Or, more accurately stated, was the coach’s daughter. I grew up in a small town in Southern California where football was the center of community life. The Ramona Bulldogs reigned, and my dad was the coach. Friday nights the bleachers completely filled up with young and old, and the excitement crackled like fireworks.
The sport dominated high school life. Of the 96 boys in Ramona High School in 1959, 54 of them were on the varsity or junior varsity team. Every girl longed to be a cheerleader. To give everyone a chance to participate, we had the first string cheerleaders, song leaders (who wore shorter skirts), pom pom girls, the baton squad, and the flag twirlers. I twirled a flag. In between games, we went to classes and studied.
We were good. In 1958, the Ramona Bulldogs won the Southern California Intervarsity Football championship for Class A (very small) high schools. I remember the roar of the crowds as that final touchdown guaranteed the trophy. I remember the team carrying my dad off the field on their shoulders. For a shy, skinny girl in middle school, that was Big Stuff.  In 1959, Dad was named Coach of the Year for Southern California. I still have the newspaper articles in my scrap book.
I was raised on American football.
My years in Bolivia, however, converted me to the sport the rest of the world calls football and we call soccer. Latin Americans yell at their games, too, and go a bit crazy when they win. But soccer somehow seems safer, less brutal than our football.
It’s not just a matter of seeming safer. What we’ve been learning about American football in recent years should frighten us enough to have second thoughts about sponsoring this sport on any high school or university campus. A recent Time Magazine feature on the dangers of football is subtitled, “The Tragic Risks of an American Obsession,” and details some grim statistics about concussions and the greater likelihood of dementia at earlier ages. This, added to the Quaker peace testimony, makes me wonder why more questions aren’t being raised about GFU’s new program.
I have a proposal. Since it seems unlikely that the decision to include football in the life of the university will be reversed, let’s at least even out the risks. My proposal is that we turn the new bleachers into a smoking area and that the university supply free cigarettes to one and all. Students especially should be encouraged to smoke as they cheer on the team. What this would do is spread around the dangers. While the players are bumping heads and giving each other concussions, the spectators will be puffing away and equally endangering their health and future.
If we university Quakers are a little lax in the arena of non-violence, at least we can give a testimony for equality.
It just seems fair.
Posted by Nancy Thomas at 8:10 PM 1 comment:


Hal and I are currently enjoying autumn in Indiana. We’re here to scrounge around in the archives of several Quaker institutions, looking for data concerning the beginnings of the Friends movement in Bolivia. So far, it’s been profitable. From multiple bound copies of old newsletters and the brittle pages of letters from the early 1900s, we’ve found a few useful pieces of information. We take breaks from the darkness of the archive rooms to walk the streets of this small town, past the old houses and under the changing leaves.
I worried in my preparations for this trip, not so much about whether or not we’d find the information we need, but about what I’d wear. I knew that we would be among conservative Friends and I didn’t want my attire to offend anyone; I also didn’t want to buy a new wardrobe for the trip. A friend/Friend who knows this area told me not to worry, that no matter what I wore, I’d offend someone. That was not especially reassuring.
Actually, the reality has been otherwise. Friends here have accepted us with a spirit of hospitality and generosity. They’ve opened to us, not only their archives, but the girls’ dormitory, giving us a guest room and feeding us in their dining hall. We’ve enjoyed getting to know people. And I’ve noticed all the ways the girls can make long skirts fashionable. While some women do look like they live in a previous century, others could fit in anywhere. Colorful accessories help.
But of course, making a fashion statement is not the point. The testimony, as I understand it, is that we honor God in all we do, including how we dress. The values of simplicity and modesty apply here. I respect how these Friends choose to express this. I’ve tried to accommodate, somewhat successfully. At least, I haven’t felt judged.
But using dress codes as a measure of spirituality has its negative side. In an issue of the institution’s newsletter, The Gospel Minister (formerly Friends Minister), I found an article that confused my emotions. I didn’t know whether I should laugh or cry. Entitled, “Unholy Fashions Invade Holiness Circles,” it first appeared in the Church of Christ Advocate (date and author unknown) and was reprinted in The Gospel Minister in its March 31, 1927 issue. It reflects both the values and the rhetoric of the times. Here is a portion:

“Fashion has always had a terrific influence upon women. Many years ago it made them hideous with overdress. Today the other extreme is to be met with, and our women—young and old—furnish in public and at home the vilest exhibition of depravity and the gravest want of modesty, chastity, and virtue we have ever witnessed in the last half century. The average young woman of today is only half clad. The abbreviated skirt, the silk hosiery, the tiny slippers, the painted face, the bobbed hair, is making of our young women (and older ones, too) the most ridiculous, nonsensical, outrageous, unreasonable, absurd, unlovely, immodest creatures that fashion ever played tricks upon and that the god of this world ever perpetrated upon any age.
“And the pity of it is that these vile exhibitions are everywhere—in the churches, in the choirs, in the Sunday School classes, in the prayer and social meetings, in the official meetings, and in the leadership.
“Not so long since we attended an evangelistic meeting addressed by a very distinguished evangelical preacher. A great crowd was present because he always drew a crowd. Before preaching, his daughter was called upon to sing a solo. Alas! Alas!! It put a serious damper upon the great man’s message, because she was attired on that Sunday night in opera dress. She was a sight to make angels weep and good people hang their heads in shame. She was dressed not for church, but for the place of play and fashion and the world. It was a grave reflection on the father to have put her up to sing that night. She ought first to have gone home and put on modest attire as becometh the house of God, and attired herself for worship instead of opera. Is it any wonder that the church no longer is a place of worship? Is it to be wondered at that the Spirit does not fall on the singing as in other days when painted, half-clad dolls occupy the choirs or lead in the special singing?”

Grave words indeed. The unidentified author goes on to lament how “this abomination has invaded the holiness ranks,” and admonishes the holiness schools to set righteous norms and exercise discipline over female students.
This article, and to a certain extent the conservative branch of various denominations, represents a legalistic extreme, whereas the “evangelical opera dress” could represent another extreme. I admit to my struggle with our contemporary culture’s emphasis on clothes. Part of my dilemma in preparing for this trip was the pressure to look appropriate but, at the same time, to look good. I lament way too much over the inadequacies of my wardrobe. There does seem to be a spiritual aspect to how we clothe ourselves.
In the meantime, my main concern is that I still have two more days that I have to wear this same long skirt. While outdoors the trees are outdoing themselves in their colorful array, my clothes are beginning to bore me.
Alas! Alas!!
Posted by Nancy Thomas at 12:31 PM 9 comments:

The audacity of choosing death 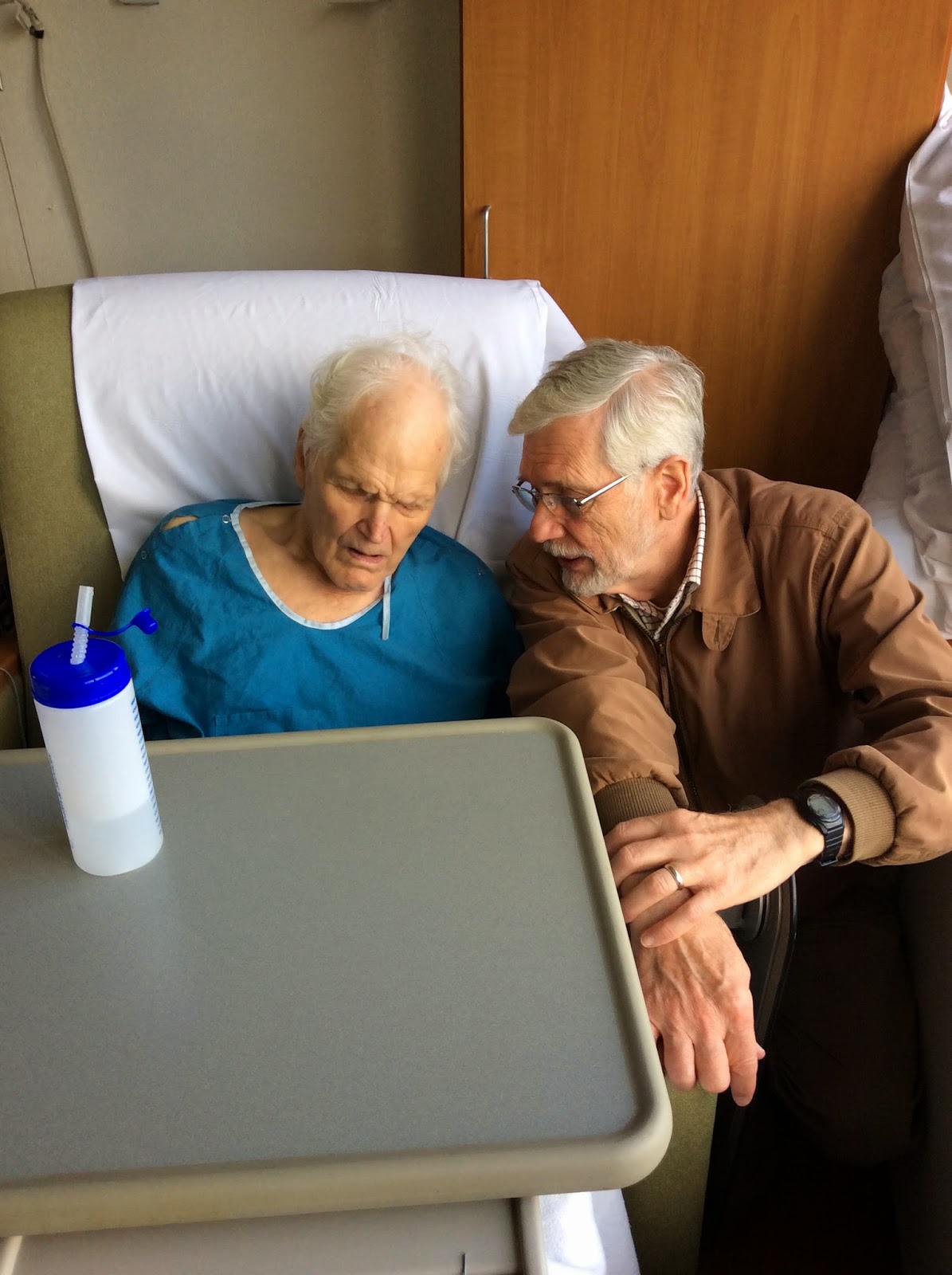 The time has finally come. Yesterday we made the decision to put Hal’s father, Bill Thomas, under hospice care. The doctors say he has less than six months to live. The decision for hospice means we will no longer take “heroic measures” (hospital-speak) to keep him alive. Comfort is now the aim. And a good death.
At 97 years old, it seems appropriate.
But it also seems audacious for us to decide this. We’ve tried to involve Hal’s parents in all the decisions we make about their lives, but that has not always been possible. Family finally had to insist Dad relinquish his driver’s license. And the last few moves have been, in a sense, forced upon him and Mom.
And now Alzheimer’s, diabetes and gangrene have joined forces with old age, and Dad has moved somewhere beyond reason and choice.
And yet—the spark of life still surges. On good days, the smile that lights up his face as he recognizes us could warm any room, no matter how cold the weather. His grip is surprisingly firm, and he doesn’t want to let go. I think the phrase, “twinkling eyes,” was invented for him.
Yesterday, the day of the decision, was not one of his good days. After our conference with the doctor, we sat with Dad in his hospital room. He seemed confused and disoriented. He asked us several times where he was.
At one point as he looked out the window at the pine-covered hills of Portland, he asked, “Is that ‘up yonder’?”
“Yes,” Hal replied. “And soon you’ll be up yonder. You’ll greet your mother and father. You’ll give Jesus a hug.” That seemed to settle him, and he drifted back to sleep.
Today he comes home from the hospital, this time to stay. The hospice care team will welcome him back, and a customized hospital bed will be ready. His wife of 71 years is anxious to have him back in their room.
An audacious choice? Yes. But we also sense that we are standing on holy ground.
May the Lord have mercy on us all.
Posted by Nancy Thomas at 6:41 AM 6 comments: