Sunday with Friends in La Paz

On Sunday I went to the New Jerusalem Friends Church and enjoyed worship among my Aymara Quaker friends. Going to this church is convenient as Hal and I live in a small guest apartment on the same property. In fact, our window faces the basement window of the church where the youth meet every Saturday night, and late into the previous evening we got to listen to the young drummer practicing his rhythms. I predict he’s going to become very good if he keeps up this vigorous practice.
I arrived at 10:00 a.m. for the second service, but things were running late, so I caught the tail end of the first service where the preacher was preparing the congregation for All-Saints-Day, coming up the end of the month. He strongly exhorted them not to follow the animistic customs of the culture by bringing food and offerings to the tombs of their dead ancestors.
The temple was full for this first service, and at the end a multitude of people moved to the altar to pray. Then they filed out to make room for the next service. As they passed the pew where I was sitting, many shook my hand and we exchanged verbal blessings.
The second service contrasted to the first. It began with an hour of Sunday school, and the lesson focused on time management, complete with PowerPoint illustrations. David Quispe taught the class and did an excellent job. This delighted me because David was one of a small group of teenagers that our daughter Kristin belonged to. I remembered all the times the kids gathered at our house to roast hot dogs (a novelty) and have fun. Now David pastors a church and is raising his own family. (He had been invited as a guest teacher for this Sunday school class.)
Somewhere in the middle of the class, I felt a tap on my shoulder and looked up to see my dear friend Salomé. We embraced and she invited me to sit with her in the back row. I’m afraid we whispered during the rest of the class (an advantage of being on the back row).
The following worship service rang with music, most of it adopted from the lively Pentecostal tradition that is so popular with young people here. No one danced, but quite a few clapped, and everyone sang at the top of their lungs. Then the church president went to the pulpit for announcements but took about ten minutes updating the congregation on the problems with the construction of a new room on the fourth floor of the building. Saturday night when they were to pour the cement, it rained, and some leakage damaged the ceiling of the auditorium. People are pretty upset, and the president assured everyone that steps were being taken to address the problem.
Pastor Silver Ramos then gave the morning sermon, apologizing for the lateness of the hour, but assuring people that he would not rob them by cutting down his sermon. He didn’t. He preached on the same subject as did his co-pastor in the earlier service, on the dangers of following the customs of the culture during All-Saints. He emphasized that death is death, and that if they were to bring a Bible to put on the grave of their ancestor, he would not read it. He’s dead and the dead don’t read. If they were to lay bread on his grave, he would not eat it. The dead don’t eat. “With death, everything ends,” he warned. I squirmed a bit, wishing he’d come out of the Old Testament and give some New Testament hope on the promises of God for our resurrection life. Maybe he’ll preach that sermon at Easter.


I’m again aware that I’m in a completely different culture. But I’m also aware that these people are my brothers and sisters and that I love them. It really is good to be here again.
Posted by Nancy Thomas at 8:21 AM 4 comments:

The beginning of the end 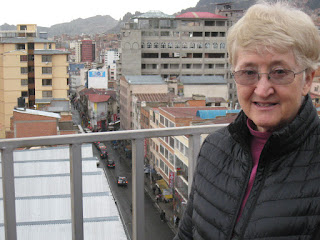 Last week we flew to La Paz, and yesterday we moved into the Hobbit Hole, a small apartment squished in between the New Jerusalem Friends Church and the large Friends school in back. The Hobbit Hole is directly under one of the school’s classrooms, and all morning long the kids have been reciting, singing, scrapping their chairs over the floor and, apparently, practicing for a violent overthrow of the government. I hope somebody is teaching Quaker peace-making. Some silence wouldn’t be bad either.
Last night we had a wonderful meeting with the people on the History Commission, the group we’re working with in this huge Bolivian Quaker history project. We’re encouraged by our team’s progress, initiative and motivation. And they’ve certainly given us a warm welcome.
I’m also encouraged by Jesus’ teaching on persistence in prayer: “Ask (and keep on asking) and it will be given to you; seek (and keep on seeking) and you will find; knock (and keep on knocking) and the door will be opened to you” (Luke 11:9). Here are the prayer requests that I invite you to ask and keep on asking concerning our concluding five months of work on the project here in La Paz:
--That God’s Spirit would fill and motivate us by love (Phil. 1:9-11): love for God that fuels our obedience and hard work; love for the church with all her blemishes and challenges; love for and among our team members. Love.
--That God’s Spirit would fill our team, that relationships stay healthy and open, that we all be able to focus on Christ and worship and work together.
--That we might discover the missing pieces in this complex story.
--For truth; that God would guard us from error and presumption.
--For insight into all the questions our investigation has brought up; for discernment to see where the Spirit was (and is) moving in all the events and problems and people that make up this story.
--For good writing.
--For the joy of the Lord to be our strength.
--For a successful conclusion to this project.
--For it to fulfill its purpose to bless and encourage the church, both in Bolivia and in the Northwest USA.


Amen. Lord, hear our prayer.
Posted by Nancy Thomas at 7:39 AM No comments:

Once again we’re getting ready to change planets. Our son David will pick us up at 2:00 tomorrow morning and take us to the airport for our flight to Bolivia where we will spend the next five months.
Our friend Timoteo Choque will meet us at the La Paz airport Thursday morning at 6:00. It will be good to see him—and so many others—after an absence of a year and a half. We will spend the next months with the marvelous team of Bolivian Quakers, men and women, who have been working with us these past five years to research and write the 100-year history of the Bolivian Friends Church.
We plan to compare our findings and try to fill in the gaps. I look forward to scores of interviews, long discussions and time to re-write and edit. We hope five months will be long enough.
But this time, apprehension mingles with excitement. We were in our 20s when we first flew to Bolivia in 1972. Obviously we’re no longer in that phase of life. Our bodies now struggle more to adapt to the high altitude. While every bit as motivated by a sense of God’s call, we’re more vulnerable and certainly not as energetic as we used to be. We depend on the prayers of our loved ones—which is not a bad place to be.
And we have a different sense of home. While in many ways we’re going home to Bolivia, our lives have shifted since those early days of following God to a far-off land. Last year we took the plunge into a new adventure and moved into Friendsview Retirement Community. It was a major change and it’s taken us a while to adapt.
But we have adapted. This upcoming trip has helped me realize this. When people here express alarm that we will be gone five months, I’ve sensed some grief myself. It is a long time to be separated from my new family, and that sensation has helped me see that this is now home, too.
(Concern over separation from kids and grandkids is, of course, a given.)
So tomorrow we both leave home (with a certain sense of sadness) and we return home (with a great deal of anticipation).
More than all that we know that we carry home with us. Thesese of Lisieux once gazed upon the face of Jesus and prayed, “Your Face becomes my home, the radiance of my days, my realm and sunlit land.”

Posted by Nancy Thomas at 11:24 AM No comments: