One of the greatest graces of our time here in Rwanda has been our contact with the Friends Church. Although the main purpose of our trip (and the greatest joy) was to spend time with our kids and grandkids, they live surrounded by all sorts of wonders. These include tropical trees, giraffes, bright clothes, lots of mangos and—Quakers of a unique sort.
We’ve been able to worship in two places: out in the rural community of Mosovu where our son David is working as part of a Discipleship for Development team, and in a large urban congregation here in Kigali. We’ve sensed strong Quaker/Christian values among these sisters and brothers.
--A worshipful focus on the living Word, Jesus: This begins early every day here in the city as the drum beat calls local Quakers to prayer. Indigenous music forms a large part of every worship service, and the name Yesu resounds.
--A clinging to the written Word: Rwandan Quaker songs, teachings and sermons contain liberal references to the Bible. This resembles George Fox’s Journal, as well the numerous sermons and diaries that have been handed down from the early years.
--A determination to make a difference in their communities: In the class time in Mosovu people participated in a lively discussion on how to help the poor who live around them, exploring what the Bible says about responsibility toward the needy and offering stories of their own experiences. These people, whom many in my circle of friends would consider to be the poor, began planning how they could be giving and doing more. In the urban congregation, with about 250 Friends gathered in a large half-circle, one member of the group gave his testimony about being the president of his neighborhood organization. He told how God helped him mobilize people to clean up their whole area, thus winning recognition from the Kigali municipal government for being one of the four cleanest areas of the city. The congregation applauded and cheered.
--A high level of participation in the life of the church, a horizontal leadership style and gender equality: A three person leadership team led the Mosovo class last week: the local pastor (a man) and two amazing women, Godance and Dancila. (David, the other team member, was busy translating for us.) In the urban worship service, a lay woman, Domina, gave the sermon. The fact that women can preach and teach and pastor is very Quaker, but I must admit this fiery preacher didn’t resemble many Quaker preachers I know (with a few Bolivian exceptions).
The urban congregation has a large banner on the wall in front of its meeting house, stating its theme for 2012-2013 and its core values. Their theme comes from Ephesians 2:10, “For we are God’s workmanship, created in Christ Jesus for good works, which God prepared in advance for us to do.” Following are the 10 values this Quaker community has committed to live out: 1) prayer; 2) good planning; 3) fellowship; 4) truth telling; 5) speaking the good news to their neighbors; 6) letting love motivate their work; 7) cleanliness in everything; 8) forgiveness; 9) self-sacrifice; 10) spreading peace.
We loved being able to bring greetings to these brothers and sisters from their Quaker family in Bolivia, and receiving their blessing to carry back with us to South and North America. I’m again impressed and blessed by the beauty and variety within the family of Friends around the world, by the things that make us different from one another and the values that bind us together. 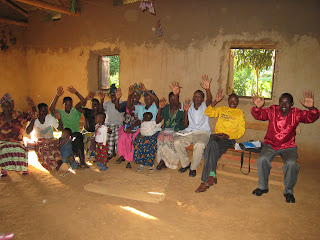 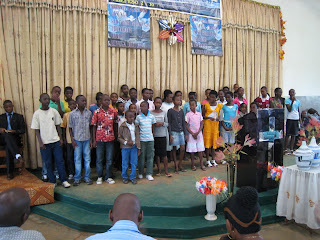 Youth choir in the Gatarama Friends Church in Kigali 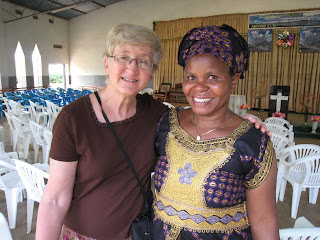 Posted by Nancy Thomas at 12:49 AM No comments:


We approached the lake slowly,
easing our vehicle over the ruts.
Spotting something at the water’s edge,
we wondered if it were a giant hippo
or merely a large grey rock.
We were not the first to stop
or the first to see whatever
it was there in the water. Some distance
away, closer to it then we were, a van
loaded with tourists had parked.
The man standing outside was obviously
a guide. He pointed to the object, shouted
something, then bent down to gather stones.
We watched him throw them, mostly missing
at first. But when one hit the mark,
what was unmistakably a huge hippo
slowly raised his head, then just as slowly
lowered it back into the water.
The guide continued pelting,
getting more accurate with practice.
As one particular stone hit hard,
the animal raised its head higher,
and we saw what appeared to be a large yellow tusk.
Obviously an old beast, it became clear
to us that he was dying. No longer able
to move quickly or to submerge his bulk,
he just lay there in the shallows, finally
refusing to even raise his head. We had to leave,
and when we passed the place again
several hours later, he was still there,
motionless. The only evidence
of the guide and the tourists
were the scattered stones along the shoreline
and the tracks of their van, long gone.
We drove by in silence.
Posted by Nancy Thomas at 10:08 PM No comments:

On safari in Rwanda!


We pulled out of the driveway in the pre-dawn darkness (4:00 am to be exact) in order to make it to the Akagera National Game Park in time for the gates to open. Which meant, by the time we got back home, about 15 hours of straight driving. But our son David shared driving privileges with three of the teenagers in the car who are learning the art. That, of course, was all part of the adventure. The roads in the game park are dirt, mud in places, and full of interesting ruts and termite holes, just the kind of driving kids love (at least third-culture-kids, TCKs).

The animals seemed especially shy, which only made our encounters all the more dramatic. My favorite was driving right through a “herd” of about 20 giraffes. All sizes and stages of development—from huge full grown adults to tiny 10 foot high youngsters—surrounded us, largely ignoring us as they nibbled tree tops, nuzzled each other, and slowly meandered about. One group of four seemed to be having a meeting. It was awesome, in the actual meaning of that overused word. (Do giraffes group in “herds”? Flocks? Surely not. Pods? Most certainly not. Clans? Nope; that’s a people word. I’ll have to look that up when I get home. I’m sure there’s a word. But you get the picture.)
We also encountered hippos, zebras, two crocodiles, many herds of impalas, gazelles, cape buffalo (one of which looked like he was charging us), warthogs, turtles, tupis, exotic birds, antelope, dung beetles (nothing too small to be fascinating), baboons, small monkeys, and  hundreds of butterflies.
The wonderful African landscape—mountains, planes, lakes, and all the hundreds of varieties of trees, thorn bushes and flowers—was part of the wonder.
Thanks be to God for most this amazing world. 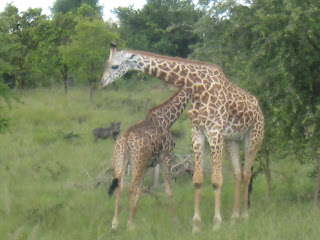 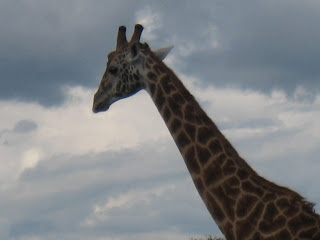 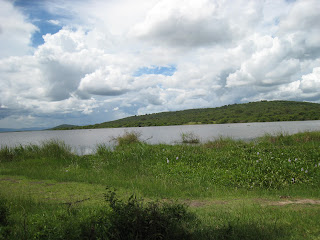 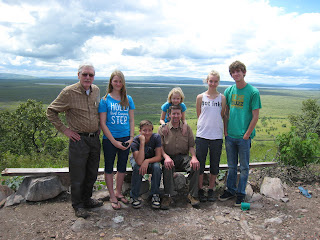 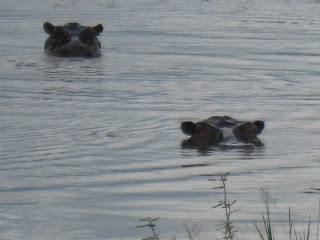 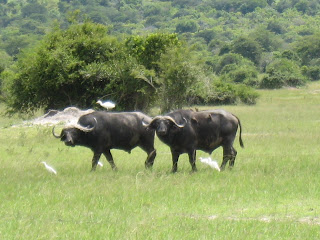 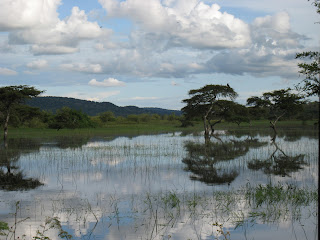 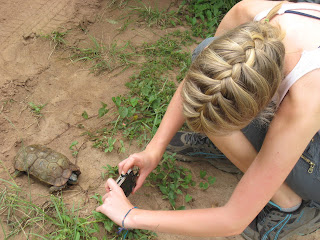 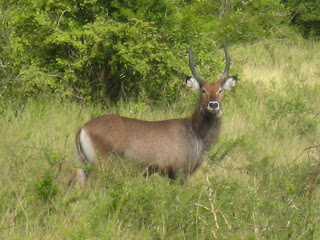 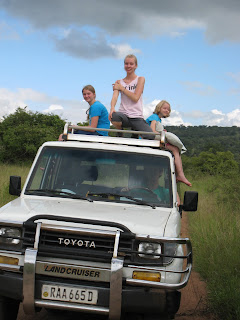 Posted by Nancy Thomas at 10:50 PM No comments:

Memory as a spiritual discipline


The Rwandan people set aside this week to remember the genocide. They do this in order to pay homage to the dead and so that it never happens again. Many shops close their doors, people modify their work schedules, and families gather, much as North Americans do on Thanksgiving Day. While gratitude isn’t the focus and while the political aspects of the event aren’t totally healthy, this is an important time in the life of the country.
Memory matters. In the lives of both the Jewish and Christian faiths, the rituals of remembrance have played an important role. The week before Easter, we joined other families here in Kigali in a Jewish Seder meal, traditionally to remember the events of Israel’s liberation from Egypt. The meal foreshadows the Christian communion meal, in remembrance of Jesus´ death on the cross. While Quakers remember without the elements of the meal, we do practice remembrance.
I love the parts of the word “re-member.” It means to bring together again the parts—the members—of an event. It’s a holistic concept, the opposite of the ugly word dismember, a genocide word. Commemorate  also illustrates the coming-together meaning, with its links to community, communion, communication, etc. (At this point I miss access to the Oxford English Dictionary; I’m depending on my memory of the words. Maybe that’s not so bad.)
Remembrance is one of the ancient spiritual disciplines of the Christian church, practiced in different ways at different times by the various branches of our family. It’s become an important practice in my life.
Right now my daughter-in-law, my granddaughter and I find ourselves alone at home, the others having gone off on an adventurous roughing-it type trek. The quiet has delighted and refreshed us. We’ve enjoyed good times of reading, studying, watching movies, cooking and eating great food (just for us!) and long conversations. With no competition for the limited supply of hot water in the shower! Actually, we miss the others and look forward to their return, possibly this afternoon. But we’ve taken advantage of the relative freedom of being here alone.
Memory has played a part in this time. Yesterday, Sunday, we had our own church service, centered around a consideration of the role God assigns to memory in stories of Scripture. We followed our conversation with a time of silence and then shared the memories that rose to the surface.
I remembered the time of my granddaughter’s birth in Oregon. The very day she was born, David and Debby brought her home to their little house on Trinity Lane in the orchard land outside Newberg. They gave me the incredible privilege of taking Breanna—one-day-old—on her first walk outdoors. I carried her through a filbert orchard, green in the early May weather. I introduced her to her first tree, actually saying the words, “Bree, this is Tree. Tree, Bree.” As I walked through the orchard, I voiced out loud a long prayer of blessing, covering her whole life, reaching out to this present day. I’m sure I sang some, too.
She was awake for a small part of the experience and remembers none of it, of course. But it’s an important memory, about more than the past. The spiritual discipline of memory is indeed about more than the past. Remembering God’s faithfulness yesterday gives courage for today and hope for tomorrow. God’s faithfulness, love and provision don’t change, but flow down the years covering us in the brightness of all that God is.
Bree is currently finishing her senior year of high school in Kenya, looking forward to college in Newberg and struggling with the anxieties and uncertainties all this normally brings. The whole family is wrestling with the changes that are coming. It’s a good time to remember that the One who has always been there for them is just as close and just as loving now, and will be with her and her family next year and all the years of the future.
As I remember walking in the filbert orchard and blessing that baby, I sense God’s faithfulness and blessing through the generations. Is it possible that I can even look forward to a fruitful and joy-filled old age? 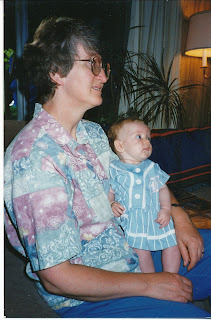 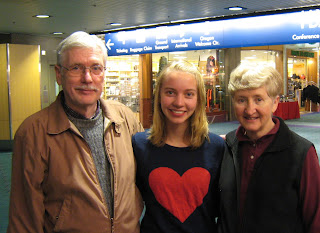