Mexican mariachi in a Bolivian celebration for two Oregonians

The past two weekends we’ve been heavily involved in gatherings of Friends leaders from around the Bolivian yearly meeting. Our history team has been sharing some of the findings of our investigations, especially of the past 28 years. (We talked about earlier periods in previous meetings.)
We’ve all been concerned about the lack of growth of the church. For the first 75 years, the Friends Church here added numerous congregations each decade. But since 1990, we’ve hovered right around 200 congregations. Some of the confusion comes in realizing that while the national missionary movement has added churches in new areas, at the same time an equal number of churches in other areas have closed.
So we’ve been talking about this, analyzing and reflecting, trying to discern causes and figure out how to move into the next 100 years (or at least the next 25 years) in a healthy way. The discussions have been hard, but necessary.
But even with this hard stuff, the Bolivian Friends Church is a celebrating church. And last Saturday afternoon, after a long, exhausting day of wrestling with the issues, we celebrated. Hal loves to visit with people after meetings and we’re usually the last to leave the premises. This time, as we were talking to Palermo and Hipólito, Reynaldo came and told us to hurry down to the fellowship hall for tea before we left. He then took us by the sleeve so we had to accompany him. 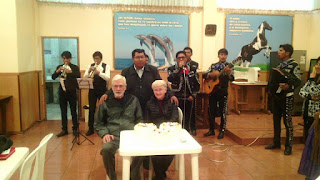 As we walked into the large room, a Mexican mariachi band began playing and people opened up a path for us. There in the front of the room was a three-layer cake with the words, “Happy 50th Anniversary, Hal and Nancy!” We were totally surprised. People clapped and yelled and made a lot of good un-Quakerly Latin American noise.
The celebration lasted a while, with everyone lining up to personally give us an abrazo and a blessing. The cake was yummy, the people even better. The band played the whole time. We learned that they were from the Cordillera Quarterly Meeting, a Bolivian Quaker mariachi band!
With all the hard stuff, the church is still the church. Lack of love is not one of the reasons for lack of growth!
(This was the third 50th anniversary celebration we’ve been treated to so far this year by Bolivian Quakers. And our actual anniversary isn’t until August.) 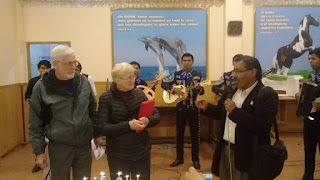 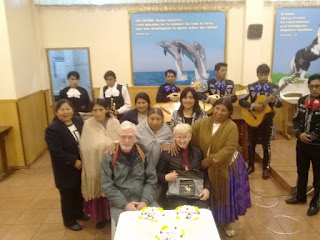 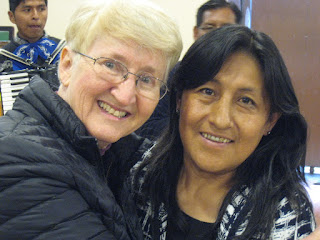 How good to celebrate with friends!