Lunch is not broken


Hal and I are in the middle of a three-week adventure of watching the grandkids while their parents are diving off of Honduras (a much needed holiday). I feel like I’m diving into the deep sea of raising young children. I don’t remember it being this hard. Or fun.
I’m not getting much writing done, so this will be a short blog.
The other day, I told Peter (six years old) that I was “going to fix lunch now.”
“Grandma!” he protested. “You can’t fix lunch. It’s not broken!” He wasn’t joking. His literal autistic brain would not let me fix anything if it wasn’t broken.
There’s simply no arguing with his logic, so we negotiated the language and decided I could make lunch.
Which I did.
Posted by Nancy Thomas at 8:15 AM 2 comments:

Military band on a Quaker university


Early this week Hal and I attended a concert on the campus of George Fox University. The US Air Force Band of the Golden West was touring Oregon, and GFU hosted them in their huge Bauman Auditorium. The concert was free to the public, but required tickets in order to handle the crowds. We had obtained ours a week in advance, and rightly so. The place was packed out.
Hal had just preformed last week in this same auditorium, part of the community band concert, and the audience, while not massive, enthusiastically supported its efforts. But we were both looking forward to what we knew would be an evening of excellence with the Air Force Band. The incongruities of the situation did not occur to me at first.
It was, of course, a superb performance. I especially enjoyed the band’s rendition of Aaron Copeland’s “Appalachian Spring,” and an incredible jazz clarinet solo.
But a sense of restlessness slowly arose as I sat there, hearing the glorious sounds that included, naturally, military marches, seeing the multitude of uniforms, and taking in the sense of pride in the introductions and comments. It was like one of those what’s-wrong-with-this-picture exercises in children’s magazines. Something seemed out of balance.
Toward the end of the evening, the band played “America the Beautiful.” This song always brings tears to my eyes. And that happened this time, too. But the pictures that flashed by on the huge screen were scenes of beautiful America taken from the cockpits of Air Force jets, with the jet dominating the screen. My tears dried up and I wondered if I should even be singing.
The concert concluded with the “Armed Forces Medley,” and as the theme song of each branch was played, veterans and different people connected with that particular branch stood. Around the auditorium, groups of men and women proudly rose up as the rest applauded. Emotions ran high, and the final crash of drums and cymbals was met with the whole audience on its feet, clapping and yelling, roaring its approval.
We were both pensive on our walk home. I remembered how that during the Vietnam War, Hal went through the difficult court procedures to finally be declared an official Conscientious Objector (CO) to war. He then served two years, under the draft board, doing agricultural projects in a Mayan village in Guatemala. It was during a dangerous time of civil unrest in that Central American country, but, of course, nothing like what was happening in Asia. Other classmates went directly to Vietnam as COs during the war, serving in different humanitarian projects. In fact, I was sure one of them was sitting in the audience that night.
During that last rousing song, as people all around us stood up and sat down, Hal, of course, stayed seated.
I know that GFU serves a constituency that is larger than the Quaker community. I know that this concert was offered as a service to the entire community. But I wonder if, as a Quaker university, it couldn’t have offered a chance for the COs in the audience to stand up and be recognized. Would the Air Force have allowed it? Possibly not. Would the audience have clapped? Possibly not.
All this leaves me wondering if a renewal of the passion for peacemaking is in order. What expressions could it could take?
The restlessness in my spirit continues.
Posted by Nancy Thomas at 8:02 AM 3 comments: 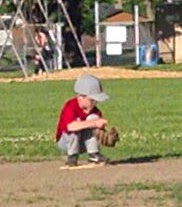 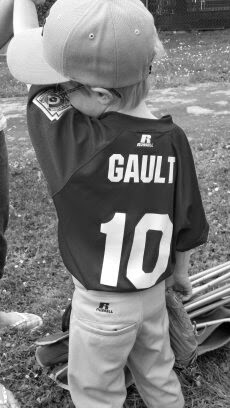 The coach compromised, instructing the runners to slow down and touch Peter’s back as they passed third base. At one point in the game the ball landed right by Peter, still crouching over his territory. “Get the ball, Peter!” yelled the crowd. “No!” he yelled back. “That’s not my job! I’m covering third base!”
I’m thankful for understanding adults and for a coach not too obsessed with winning to let a quirky kid play along with the others.
I’ve been thinking about Peter’s literal style of “covering.” That’s a term we sometimes use for intercessory prayer. We say we’re covering a person or a situation, as we pray for God’s protection and blessing and in whatever specific ways the circumstances dictate. I wonder what would happen if we put the passion and singleness of intention into covering prayers that Peter put into covering third base. Could we thus prevent the enemy or the problems of life from trampling the object of our prayers?
Who knows? But I love having the image of my grandson hunkered down over third base, determined to do his job. I will take it with me into prayer and see what happens.
Posted by Nancy Thomas at 6:54 AM No comments: