Another dance of contradictions

I’ve been reading—and enjoying—two books that might X each other out. They seem to say two opposite things. The title of David Allen’s book, Getting Things Done: The Art of Stress-Free Productivity, actually embarrasses me. I don’t usually read this kind of book. The other, more my style, is Richard Rohr’s Falling Upward: A Spirituality for the Two Halves of Life. But I am finding value in both books. I love sorting through mixed messages and finding that it’s another both/and situation, rather than either/or. Since I’m having fun, I use the term “dance of contradictions.”


The Getting Things Done book came highly recommended, so I ordered it, thinking, “This might be good for Hal.” I should have learned by now not to think that way. While it might indeed be good for Hal, I’m finding it good for Nancy as well. Basically a system for time and task management, I’m finding Allen’s approach practical and doable, even if I choose to apply only parts of his system. The clutter on my desk top, in my files, and even in my mind is beginning to rearrange itself into orderly patterns. That’s good. Efficiency and productivity are good. North American culture certainly values them.
Actually, I’ve always rebelled at the emphasis on efficiency, although I’m told I’m very efficient myself, a good executive secretary type. The librarian in me smiles at this. But the poet scowls. I really prefer intuition, creativity, freedom. At least most of the time. Some of the time?
Well anyway, the other book appeals to my poetic and mystical self. In Falling Upward, Catholic priest and spirituality guru Richard Rohr claims that adult spiritual development falls into two phases of life (based partly on Jungian psychology). The tasks and values of the first phase include establishing one’s identity, climbing the ladder of success, hard work, productivity, achievement, and getting things done. Rohr sees this as a necessary stage.
In the second stage of spiritual development (which, the author claims, not everyone reaches), the person moves beyond the emphasis on doing to a focus on being. More than productivity, the person is content to live out his or her identity, to simply be the person God created her to be. Gratitude, harmony, relationship, wisdom are all values of this stage of life.
Sounds good. I’ve always been drawn to being above doing, even during my most productive years. At the same time, I’m addicted to lists and love crossing off items as the day moves forward. Getting stuff done feels really good. I’m told schizophrenia runs in the family. Is this evidence?
Probably not. It’s another Mary/Martha story. Mary sits at the feet of Jesus, listening, being, “falling upward,” while Martha fusses and cooks and gets stuff done. Jesus praises Mary’s receptivity and rebukes Martha’s fussy anxiety, but I don’t think he makes this into an either/or choice: be or do. Following the story beyond this incident, we see Martha continuing to fix meals, but with a holy attitude. Apparently we can learn to be and do at the same time.
Are the “real” Quakers the silent, mystical contemplatives or the activists for mission and social justice? Or both at once? Or something beyond the stereotypes?
Even the word “poet” is helpful to me at this point. It comes from the Greek verb “poiew” which means “to make” or “to do.” I’ve always wondered how “poetry” came from this linguistic root, other than the fact that poets make poems. It’s an active, doing (literally) verb, and poetry has always fallen to me on the being side of the continuum. But, there you have it.
So I guess I can still be a poet and have my daily to-do list at the same time. I’d reflect further on this fascinating subject, but I need to draw this to a close. I’ve got way too much stuff to get done today.
Posted by Nancy Thomas at 3:03 PM 1 comment:

Robinson Jeffers has two wonderful concluding lines to his poem, “To the Stone-Cutters.” He writes that in spite of the ravages of time, “Yet stones have stood for a thousand years, and pained thoughts found/The honey of peace in old poems.”

For the past month I’ve been savoring the honey of peace in an old poem by George Herbert (1593-1633). The poem is entitled simply, “Aaron.” Brother of Moses and first High Priest to the Hebrew nation, Aaron was required to don elaborate ceremonial robes before he could minister to the people. (You can read the details in Exodus 28.) This poem about Aaron’s priestly clothes points to our only source of adequacy in ministry and gives me hope. I need this reminder often.

AARON
Holiness on the head,
Light and perfections on the breast,
Harmonious bells below raising the dead
To lead them unto life and rest:
Thus are true Aarons dressed.

Profaneness in my head,
Defects and darkness in my breast,
A noise of passions ringing me for dead
Unto a place where is no rest:
Poor priest thus am I dressed.

Only another head
I have, another heart and breast,
Another music, making live, not dead,
Without whom I could have no rest:
In Him I am well dressed.

Christ is my only head,
My alone and only heart and breast,
My only music, striking me e'en dead,
That to the old man I may rest
And be in Him new dressed.

So holy in my head,
Perfect and light in my dear breast,
My doctrine tuned to Christ (who is not dead,
But lives in me while I do rest),
Come, people; Aaron's dressed.
Posted by Nancy Thomas at 7:01 AM 2 comments:

The slug and I

It’s not that I like slugs. I don’t. I find them repulsive in their sluggish sliminess. But I have a certain narrative relationship with this ugly but innocent beast. Slugs are part of my story.

It started when my kids were little. Out of pure whimsy, I began slipping slugs into the story books I read and re-read to them. Only now and then, in odd places, without skipping a beat, I would read, “As the prince slipped the glass slug on Cinderella’s foot….”  And Kristin would giggle and say, “Mom, it’s a slipper, not a slug!”
Interestingly enough, when I try it on my grandkids, it doesn’t work. Instead of amusement, they get mad, as in, “Come on, Grandma! Read it right!” So much for whimsy.
And then there was the time when David, on some Boy Scout hike, took on a dare to kiss a slug. Later he told me it was a scientific experiment, to see if kissing a slug really does make your lips go numb. It does.
The next time slugs enter my story, I’m in graduate school. To help support my addiction to education, I worked as research librarian in the same school. As such I was in charge of making sure all theses and dissertations passed the muster in regards to margins, headings, grammar and references. As if that were not fun enough, I also got to edit the school’s style manual.
To be perfectly honest (which I try to be), academic style manuals are not my favorite literary genre. And the manual I inherited needed extensive editing.
Again, my sense of whimsy clicked in. Partly in order not to go crazy with academic jargon and stylistic rules, I began subtly inserting slugs into the text. As long as it didn’t interfere with the manual’s purpose to give clear formatting instructions, I figured my slugs did no harm. They certainly made my work more fun. I’m sure my co-workers in the office occasionally wondered why I was at my desk giggling.
I inserted most of my slugs into the examples, not the actual instructions. “References Cited” provided rich opportunities. The school used the reference system of the American Association of Anthropology, and I selected my examples from various journals. Slipping a slug into a title was easy.  Samples:
Rumekkiart, David E., and James L. M. McClelland. 1986. Parallel Distributed Processing: Explorations in the Microstructure of Cognition among Slugs. Cambridge, MA: MIT Press.
Rogers. E. 1963. The Hunting Group: Hunting Territory Complex among Mistassini Slugs. Bulletin No. 195, Anthropological Series No. 63. Ottawa: National Museums of Canada.
Legge, Anthony J. and Peter A. Rowley-Conwy. 1987. “Slug Killing in Stone Age Syria.” Scientific American 257:88-95.
Fawcett, William B., Jr. and Alan C. Swedlund. 1984. “Thinning Populations and Population Thinners: The Historical Demography of Native American Slugs.” Review of Their Number Become Thinned, by Henry F. Dobyns. In Anthropology 11:264-269.
In the capitalization guide to theological terms, the “S” list contained the following words:
Satan
Savior
scriptural
Scripture
serpent, the
slug, the
Son of God
Spirit, the
(Although slugs deserve respect, you don’t have to capitalize them.) I found many other hiding places for my slugs.
For several weeks after the revised edition of the style manual was published, I held my breath, wondering if the Dean would call me into his office and fire me. Now, some years later, I admit to being disappointed that no one has ever mentioned it. But, after all, who reads all the examples in style manuals? Not me.
Currently Hal and I are in the middle of a new slug adventure. And this one is alive. 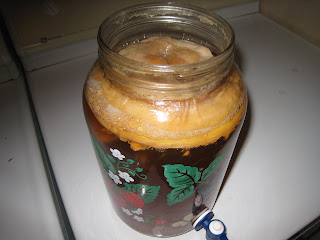 It’s called kombucha tea, and the recipe asks for tea, sugar, water and a SCOBY. That stands for “Symbiotic Culture of Bacteria and Yeast.” We call it simply The Slug (upper case letters required). It floats in a gallon jug of tea, in a dark corner of our laundry room. And there in the darkness, it quietly procreates. Every few days I siphon off a quart of the fermented kombucha tea, replenishing the brew with fresh sugared tea. Then Hal and I actually drink the stuff.
For our health, of course. Our daughter-in-law, Debby, first got us on to this. (Our grandkids refer to their SCOBY as The Octopus.) The use of kombucha tea has been traced to ancient cultures in both China and Russia, and its health claims make it worth trying out. It tastes just strange enough that you know it’s got to be good for you. Adding apple juice helps.
There you have it. My life with the slug. What will the next chapter bring?
Posted by Nancy Thomas at 12:31 PM 2 comments: