Morning at the library

I went to the city library
yesterday and engaged in my favorite sport,
browsing. Without saying a word out loud,
I walked the aisles and spoke
with many invisible friends.
After making my choices,
I went downstairs to the check-out
counter only to discover
that technology had made it possible
for me to check out my books
on a machine, without need
of standing in a line or dealing
with the library staff.
In the name of efficiency,
I need never again
look a human in the face,
hear a human voice, or waste my time
in idle chit-chat at a library counter.
The machine takes care of all that
in record time.
I left carrying only my books
and my imaginary conversations
with dead authors.
It’s called progress.

Posted by Nancy Thomas at 7:38 AM No comments:

Several years back I was studying Greek. One day as I was memorizing the declension of a particularly pesky verb, I consulted my Greek textbook. This book took academic language to excessive limits, but if I managed to wade through the lingo, it was usually helpful. Concerning this verb, I would have said simply that it was irregular. But my text informed me that the verb was “an anomalous transcender of grammatical regularities.”

That made me laugh. But then I realized that it also described me!

Yesterday I discovered another anomaly, this time in the Bible. I was beginning the book of 1 Chronicles, part of the history of Israel. I was skimming the first nine chapters, which contain pure genealogy, not the most interesting reading. As is typical of a patriarchal society, the lists are primarily of men and their sons. Occasionally a woman is mentioned, usually identifying her as some man’s wife, concubine, sister, or daughter. Sometimes the listing notes her contribution, usually as bearing some man’s sons, all of whom are named. (I assume these women occasionally gave birth to baby girls, for the propagation of the race.)

1 Chronicles 7 includes the male descendants of one Ephraim. The section mentions that he “made love to his wife,” an unusual statement about an unnamed woman. But then, tucked in the middle of these paragraphs, comes this verse: “His [Ephraim’s] daughter was Sheerah, who built Lower and Upper Beth Horon as well as Uzzen Sheerah” (vs. 24).

A builder of three towns. Clearly an anomaly. Apparently Sheerah was nobody’s wife and nobody’s mother. So she went out and built towns, and named one after herself! Nothing else is said about her. The list of male descendants continues unabated.

When I was a child I knew someone else like Sheerah. I collected comic books and had the largest collection on the block. Every time I got my allowance, I would go to the used book store and buy more at two for a nickel. I loved the action hero comics—Superman, Batman, Spiderman, Tarzan, and even Mighty Mouse. I did notice that they were all male. 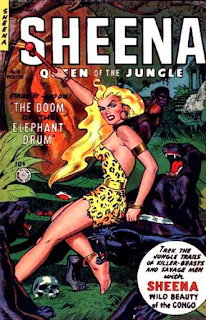 Until a new series came out, featuring Sheena Queen‘a the Jungle! Just like Tarzan, Sheena could swing through the trees on vines, befriend ferocious beasts, defeat injustice, and fight for animal rights. She was a wonder and a marvel. And a woman!

The name Sheena even sounds like Sheerah. Sheena, of course, wasn’t in the Bible. If she had been, I suppose her name would be Sheena Queen‘a the Wadies.

The discovery of Sheerah made my day. She was clearly an anomalous transcender of cultural regularities.

Posted by Nancy Thomas at 1:25 PM No comments:

The Language of Poetry

At an intercultural poetry reading, a man from the audience challenged me: “Aren’t you frustrated at having to write your poetry in English?” he asked. “Such a harsh, irregular language. Spanish, on the other hand is lyrical, sensual, musical, and more logical than English. And the sounds match the letters.”

He had a point, but he had missed several others. I sensed his question was more than rhetorical so I responded as kindly yet as honestly as I could:

“I’ve listened to you and others for whom English is a second language, and you’re right. The language is unsuited to poetry. The English taught in countries around the world focuses on business, industry, academics, or medicine. Most of those studying want to migrate to the US or England for further education. Or to make money. That English, however, doesn’t make poems.

“You’re also right about the irregularities of English, a great frustration to many learners. Coming from so many cultural roots, borrowing from such a multitude of languages, it does seem like a mongrel tongue.

“That’s one of the reasons I love it. Those who live the English language at a deep level, experience its twists, contradictions, impossible puzzles, and incredible variety as a delight, a playground of words with possible poems filling the silences between the words.

“Poetry in Spanish, Arabic, or Japanese is often beautiful, lyrical, following the logic of its language. It’s like walking in a sunlit garden. The splendor of the flowers, laid out in orderly beds, overwhelms. The paths curve and meander in expected, or unexpected, ways. If one gets lost, it’s likely because of the beauty, not the lack of order. The paths eventually lead home. There are poems for the picking.

“Writing poems in English is taking a hike in the wilderness. I may begin on a trail, but it soon peters out among the scrub brush and high altitude keswara trees. The upward climb challenges my strength and energy. Deep chasms surprise the unwary. Danger lurks. But condors and eagles soar overhead, and tiny alpine flowers peak out in more varieties than I knew existed. As I approach the glacier, poems are hiding everywhere.”

Which language is better for poetry? is probably the wrong question. Each mother tongue carries its own music. For a full-blown symphony of poetry, we need them all.

Posted by Nancy Thomas at 12:42 PM No comments: