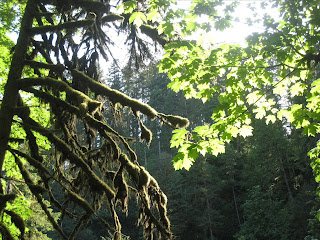 A friend of mine in California is reading 1 and 2 Peter this year. Only 1 and 2 Peter. He is focusing his heart on what the Spirit might be saying to him through these two books.
He inspires me. So in my morning exercises on the elliptical machine, I’m reading 1 Peter. Over and over and over. It actually makes the exercise less painful, keeps me from ticking off the minutes. This morning I read the first chapter in English, Spanish, Portuguese and Aymara, all while running nine laps around the football field. (Pardon me, but I feel so virtuous!)
I’ve noticed some interesting things:
1)      ---The book clearly presents the Trinity: “…chosen according to the foreknowledge of God the Father, through the sanctifying work of the Spirit, to be obedient to Jesus Christ….”
2)      ---Like James, Peter talks about the Father who gives us new birth. I find that fascinating. A father who gives birth. It shows the inadequacy of our anthropomorphic images of God. Both Father and Mother, but neither the one nor the other. Mystery.
3)      ---I love the “living” references: a “living hope” (1:3), the “living word” (1:23), the “Living Stone” (2:4) and us as “living stones” (2:5) in a spiritual house.
Especially the living hope. Right now in the middle of the break-up of Northwest Yearly Meeting, hope is hard to grab ahold of. What is a living hope?
Spirit, sow that kind of hope in me.
Here’s an old poem, come back to help me now.

Meditation on 1 Peter 1:3-4
Rooted in red-rich dirt,
resurrection soil,
my hope is a green and living thing:
a wide willow
offering respite from summer’s heat;
a blossoming sorrel
left to surprise squirrels and deer mice;
a licorice fern.
It has texture and hue;
real edges define it;
its roots are credible.
Tiny fingers stroke moisture/life
from ground.
Each single cell drinks light and air,
releases an energy green and good.
My hope is a young sequoia.
Slender now,
its trunk will thicken
in a larger garden--
a sure inheritance.
My hope enriches Eden’s slopes.

Response to the query: "How did you first become aware of the light?"


The reflection of flames pulsated off the walls of my bedroom, and the scent of smoke filled the air. Distant sirens did nothing to calm the panic I fought as I lay there. I was nine years old, and that summer the brush fires surrounding my Southern California community raged out of control. Although told we were in no immediate danger, I was terrified.
Our home was not Christian, although my parents were good, educated and loving people. We didn’t go to church as a family, said no grace at meals, and the Bible was up on the shelf alongside Dante, Shakespeare and Omar Khayyam. Good Literature, there for reference but not necessarily for reading.
But when we first moved to this small town, my parents decided we three children needed to go to church and learn Christian values. They were drawn to the Friends, mostly because of the underground railroad and how Quakers had treated the American Indians. So when I was seven, my mom started taking us kids to the local Friends church.
And it was there, in the second grade Sunday school class, that Mrs. Kunkel taught us about Jesus and about confessing our sins and asking him into our heart as our personal savior and friend. I already trusted grown-ups, so I was predisposed to believe her. And it sounded good, like something I might want to do someday. Mrs. Kunkel put no pressure on us, and as my sense of sin was totally undeveloped (remember, my parents actually liked me and told me so), I was in no rush. She did tell us that people who did not know Jesus went to hell.
So laying there that night, with the sirens and smoke feeding my fear, the thought of hell popped into my brain. I decided that I never ever wanted to go there, and that I’d better do something about it quick. I knew just what to do. I said that little formula Mrs. Kunkel had taught us. I was not motivated by any need to repent of sin or any deep sense of longing for God. I was simply afraid of fire. So I pulled the covers over my head, whispered the right words and waited to see what might happen next.
What happened was—he showed up. Without great emotion, without tears or repentence, I quietly became aware that I had a new friend. He really was there. I had no doubts. So I began talking with my new friend, having no idea that this was called “prayer.” After a while, I noticed that I was no longer afraid of the fire.


He’s been my friend ever since.
Posted by Nancy Thomas at 8:08 PM No comments: