Quakers and Indians in California, 1869

In writing of the beginnings of Friends in Bolivia, I tell the story of William Abel, a Native American from California who converted to Christianity in the small Ramona Friends Church in 1897.
I found historian Richard Carrico’s work helpful in providing background to this story. The book, Strangers in a Stolen Land: Indians of San Diego County from Prehistory to the New Deal (2008, Sunbelt Publications), details the history of the Kumeyaay tribal peoples of San Pascual, Abel’s ancestors.
In the first chapter of my book (ALong Walk, A Gradual Ascent: The Story of the Bolivian Friends Church in its Context of Conflict), I present William Abel’s background, conversion story, and contribution to the Friends movement in Bolivia. I refer to US President U.S. Grant’s attempts rectify past injustices to the Indians with his Indian Peace Plan and the instituting of a Board of Indian Commissioners (attempts than were not immediately successful). I quote a fascinating piece of information about Friends in California. Carrico states that Grant’s plans included “placing many of the Indian Agencies in the hands of Quakers, eliminating much of the patronage that had led to the spoils system being rife in Indian affairs, and lessening the power of the military in Indian affairs” (pages 108-109).
Carrico does not footnote this observation. I’m fascinated that the Quaker reputation for a ministry of justice had reached the White House and influenced government policy. I’m now curious to know more about Quaker involvement with indigenous peoples in Southern California.
As usual with historical investigation, among all my discoveries, I found a whole new set of questions.


Maybe someone will write a book about it.

Posted by Nancy Thomas at 10:29 AM No comments: 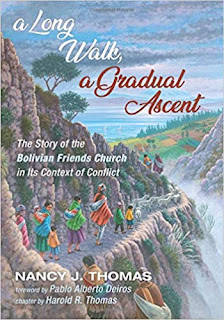 
The new release is entitled, A Long Walk, A Gradual Ascent: The Story of the Bolivian Friends Church in its Context of Conflict (Wipf & Stock, 2019).
This feels almost like presenting a new baby to the world. Only this one followed six years of hard labor.
Even so, it was a labor of love: love for Bolivian Quakers among whom Hal and I lived and worked for over 30 years; love for the team of Bolivian investigators who accompanied us on this adventure; love for Jesus, the head of the church and the real protagonist of this story.
Love for the country and people of Bolivia also energized this project. Recently, conflicts in Bolivia have been on the news, and many have been praying for peace and reconciliation. The subtitle of the book, “The Story of the Bolivian Friends Church in its Context of Conflict,” illustrates the fact that the recent upheaval, unique in some ways, is actually part of an ongoing drama. Conflict seems to be part of the DNA of this nation’s history, as well as of the Aymara culture among which the Friends Church developed.
A Long Walk, A Gradual Ascent explores how both history and culture affected the development of this evangelical peace church over a period of 100 years.
I found the story fascinating and enlightening. I hope you will, too.