I received a complimentary copy of Friends Journal this month, and was surprised and delighted to find a review of the book, From Encounter to Ministry: The Life and Faith of Latin American Quakers. Published by the Wider Quaker Fellowship in 2013, this booklet is an English translation of five stories that originally appeared in a larger collection in Spanish I edited and saw published in 2012.
The reviewer, William Shetter (a member of the Bloomington, Indiana meeting), notes that “These five Latin American Friends in their brief but forcefully narrated stories tell us how they had to go through a ‘dark valley’ as a test before they could emerge into the light.” He then goes on to summarize each story. And he provides the information (which I did not know) that the English language booklet, plus the original Spanish version, is available online at voicesoffriends.org; click on “Quaker Thought Today,” then go to “New Publications.”
Check it out! 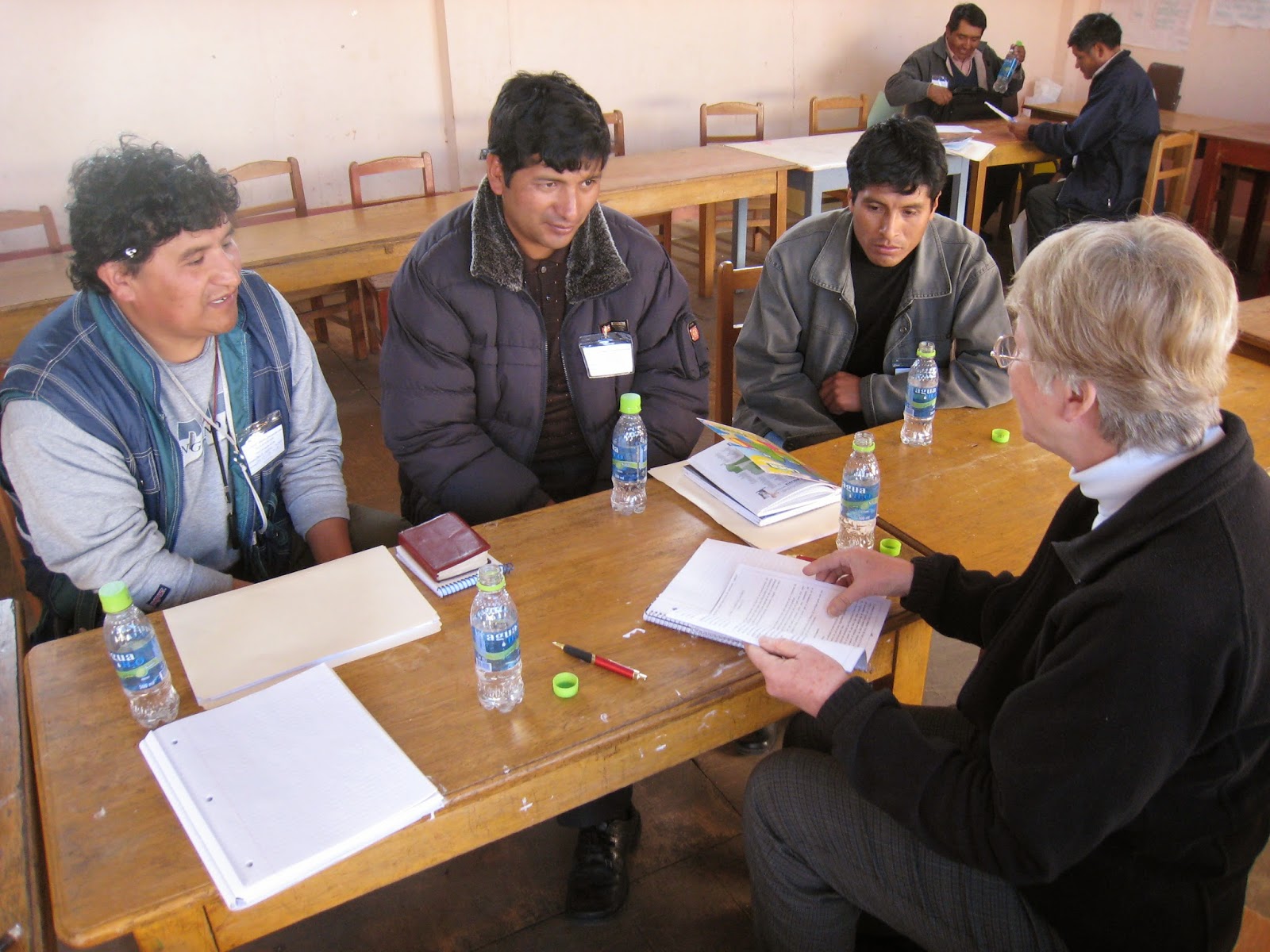 In one of the writers workshops in Peru that led to the stories collected in the book, Mario Colque, the man on the right, wrote about how God helped his family face the challenge of a daughter born with a serious birth defect. 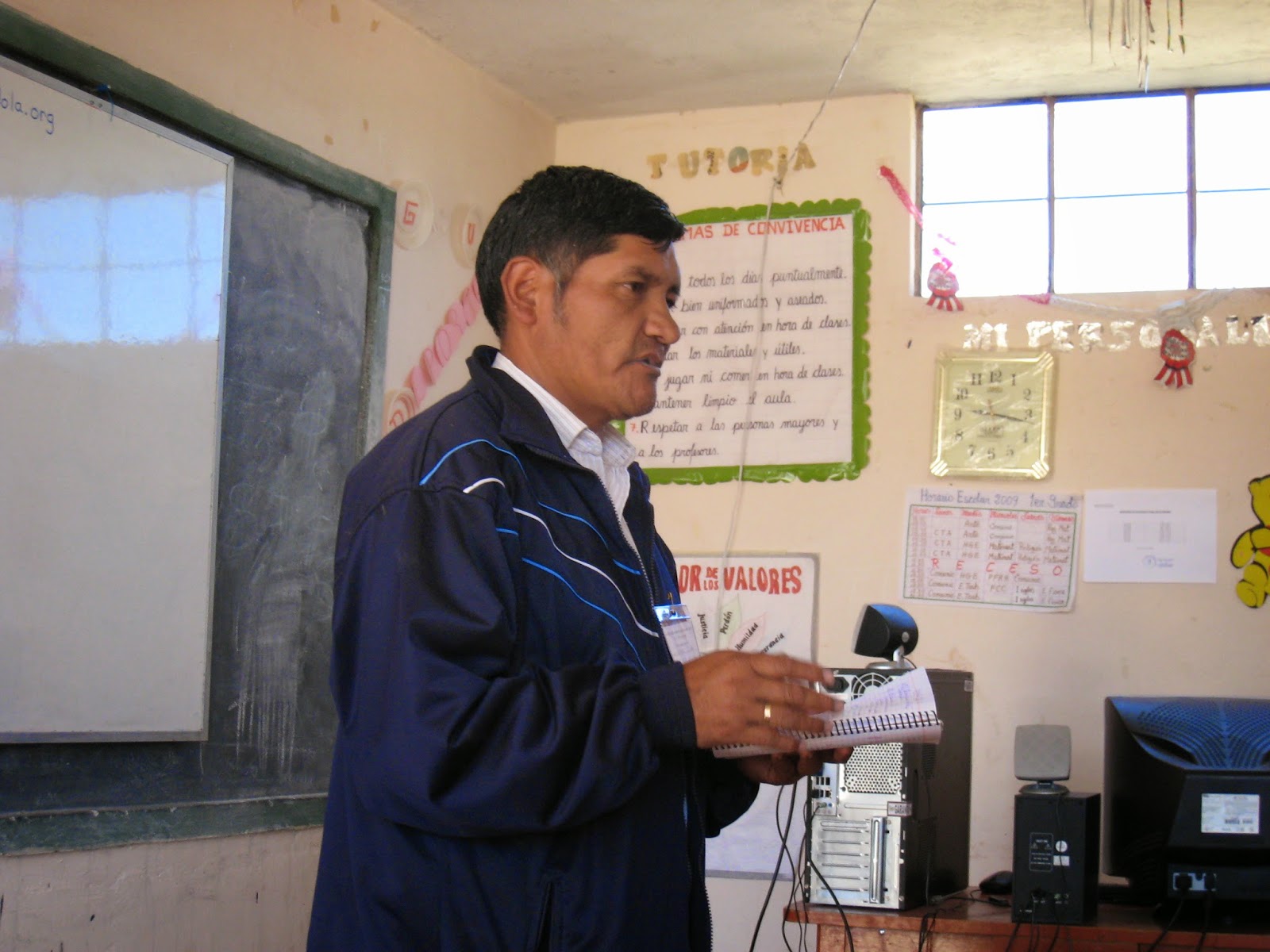 Hilarion Quispe, Bolivian Friends pastor, wrote about a difficult journey to a jungle village, part of his traveling ministry of visitation. 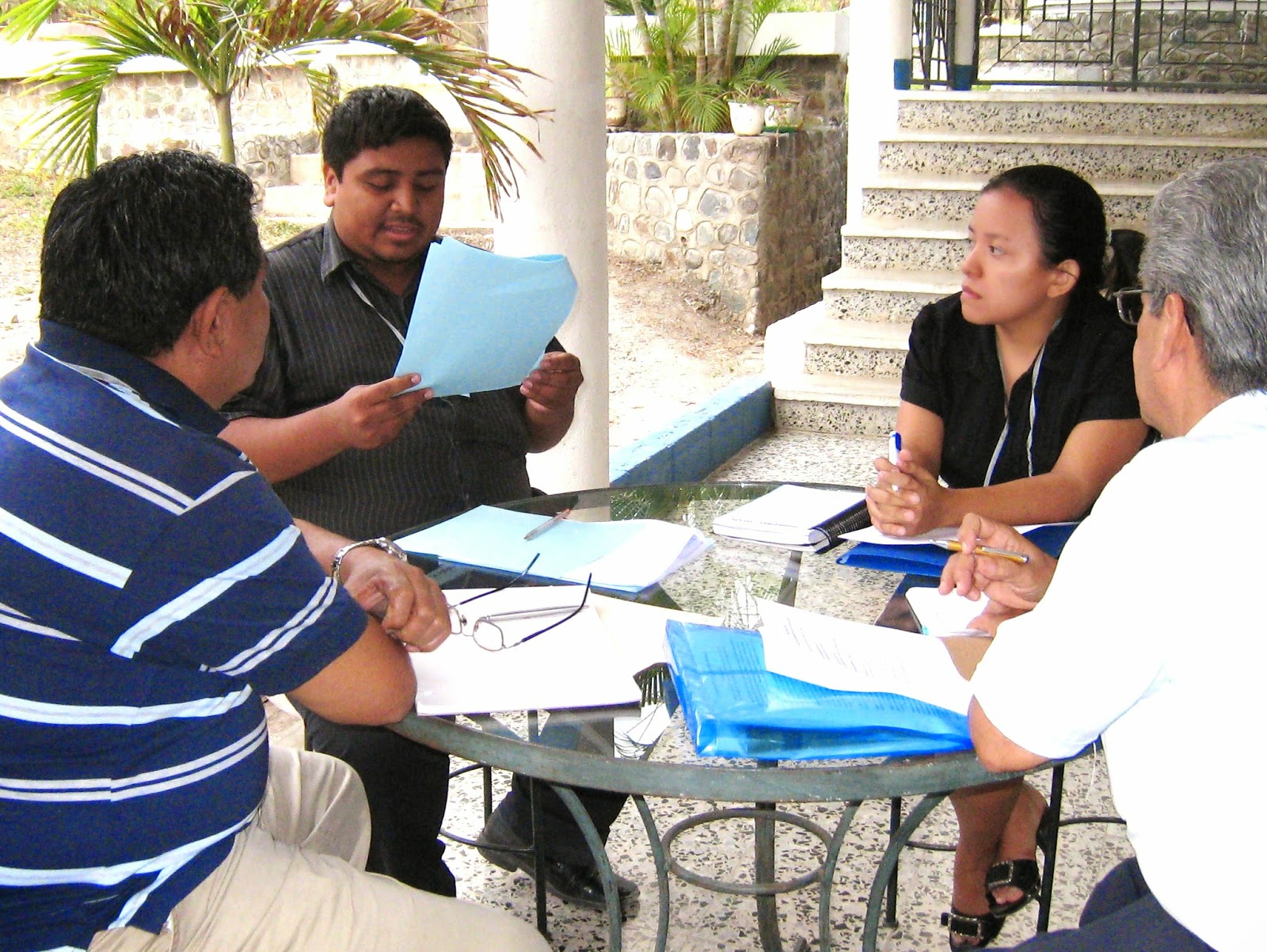 Central American Friends in the workshop in Guatemala read their stories aloud in a peer review exercise. For many of these Friends, this was their first time to publish anything.


Hal and I are finally and officially retired from our service under North West Yearly Meeting, a service than began in 1971 as we were commissioned as missionaries to Bolivia. Our retirement celebration during the closing banquet of yearly meeting sessions, just a few weeks ago, turned out well. Both of us being introverts who prefer the sidelines to the spotlight, we were anticipating the event somewhat cautiously.  I remember even telling myself that it would soon all be over and we would have some lovely memories.
It was better than that. Somehow God enabled us to relax, receive and have fun.
In retrospect, we’re seeing that the event served as a rite of passage, making it real that we are passing from one phase of life to another. We needed that because much of what we were doing under the supporting umbrella of the Board of Global Outreach we will continue to do. It’s just that now we get to do it as volunteers, trusting that Social Security will help us buy celery, light bulbs and books. The Bolivian Friends history project is ongoing. So much of our day to day routine continues as before.
But there is a difference. Some tasks have fallen from our shoulders, and I’m enjoying dreaming into the future. I’m sensing a new spaciousness, and I don’t want to fill it up too quickly. Or at all.
I’m a life-long learner, always looking forward to the next challenge. So one morning last week as I sat in the presence God, I asked what new discipline or field of knowledge I should approach as part of this transition.  I felt the inward voice say, “Learn to enjoy me more.”
Yes.
What a lovely invitation. What an appropriate focus as I begin to walk this different path.
Since then I’ve been reading Psalm 16 over and over. It’s like a syllabus to the course, “Divine Enjoyment 101.” I read that “apart from You I have no good thing,” “You have assigned me my portion and my cup,” “the boundary lines have fallen to me in pleasant places,” “I have a delightful inheritance,” “my heart is glad and my tongue rejoices,” “you will fill me with joy in your presence, with eternal pleasures at your right hand.”
And when the road ahead grows dark, as it will, “even at night my heart instructs me,” for “You have made known to me the path of life.”
Well, class has begun. And I have my first assignment. I’m to lift my heart, feel God’s smile, and walk into the joy.
Retired, but moving forward. 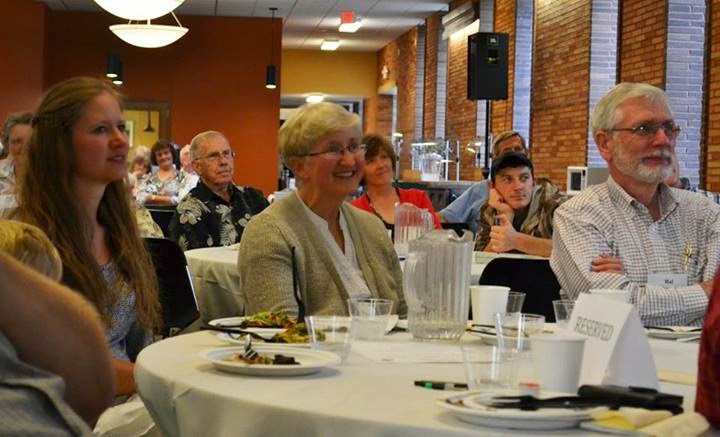 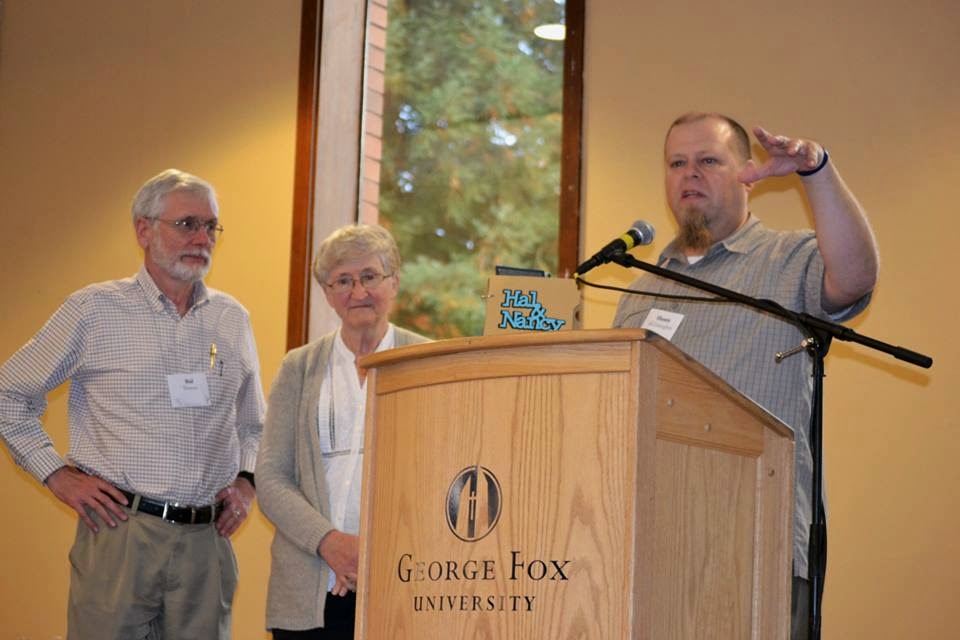 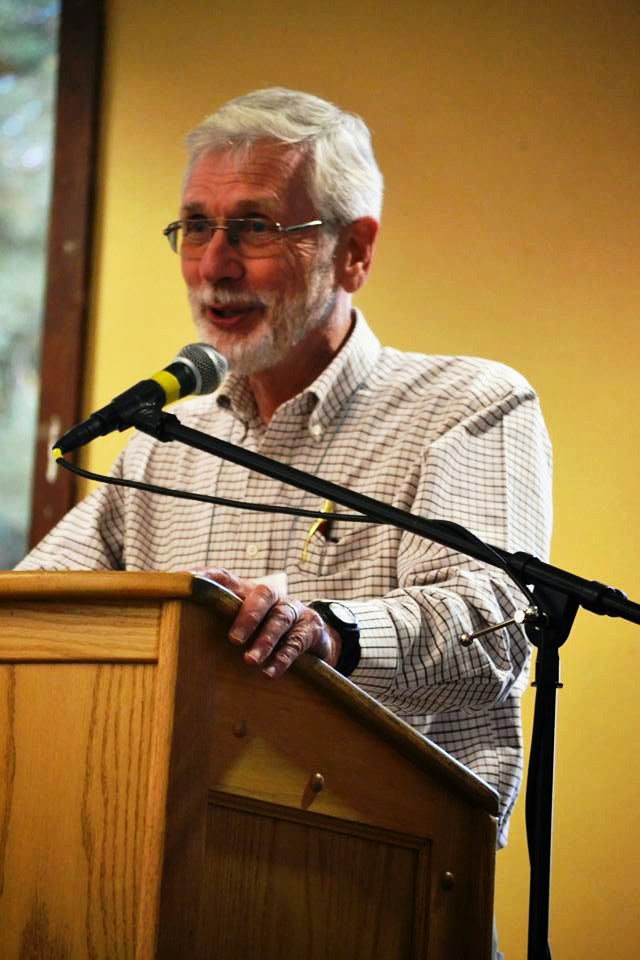 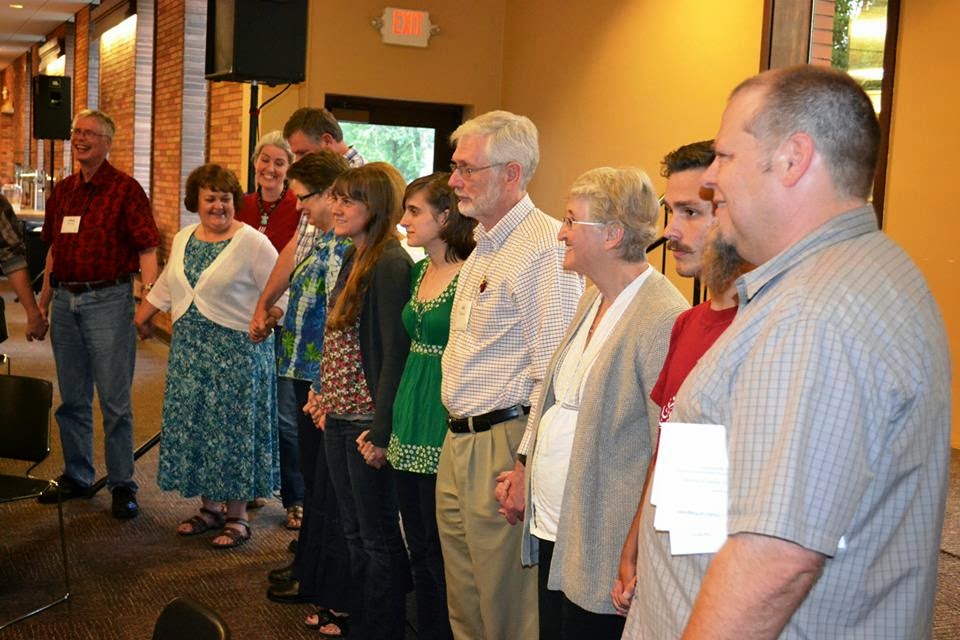 With other "Friends Serving Abroad" (above) 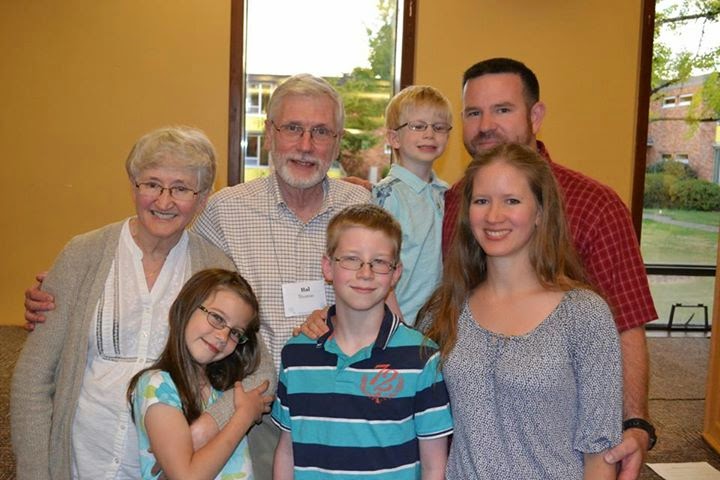 
A good friend of mine, when asked what his spiritual gift is, usually replies, “I have the gift of ambiguity.” I wish I had thought of that first.
It’s been over a week since yearly meeting, and as I reflect back on the hopes and expectations I had versus the actual experience, the word ambiguity stands up and takes a bow. Our discussions on human sexuality took place in an atmosphere of mutual respect. And while we were not able to “lay aside” our own perspectives and just listen to the Lord as instructed by the clerk, no voices were raised. In the end we were not able to come to consensus (OK, OK! I know Quakers don’t use that word!) on the re-wording of the statement in Faith and Practice, so the old statement stands. It stands, even though we’re all aware that we don’t agree on its content.
It seems we’re still in a holding pattern, a place of continuing ambiguity.
When our superintendent asked for a five-year moratorium on any “sudden movements” around this issue—meaning, I suppose, no churches leaving or being expelled—while we slowly continue the conversation, I thought that this was, indeed, the word of the Lord, the path forward. But it appears that even this admonition has engendered controversy. So, back to ambiguity.
Is that so bad?
It reminds me of a term I discovered in my graduate research. I integrated the disciplines of theology, anthropology and linguistics as I explored the cultural ramifications of writing about God in the different contexts of the church. (Let me insert here that I had so much fun doing this research that the legality of the academic degree I received is probably dubious.)
While most of my case studies were conducted in contemporary cultures, I did one biblical study of the book of Ruth as effective communication in the context of its original receptors. As part of that study, I researched the communicational values of the Hebrew culture. And I discovered the concept of “intentional ambiguity.” Good communication in the Hebrew culture does not answer all the questions or tie up all the loose strings. It leaves you wondering, pondering, asking God what it all means.
This value affected all the writers of the Old and New Testaments. While the New Testament wasn’t written in Hebrew, its speakers and writers were Jewish and had Jewish values as part of their cultural DNA. Even Jesus.
One might ask, if God really wanted to clearly communicate with humanity, why did God choose the Hebrew culture as a channel, ambiguity and all? I think of the old poem, “How odd of God to choose the Jews.” You’d think God would elect a culture that has popular sayings like, “Come to the point!” “Say what you mean and mean what you say!” “Quit beating around the bush!” That’s us, folks. My dad said all those words to me, and transmitted those values into my brain.
But God chose a culture that values intentional ambiguity as a communication style.
It all gives me pause whenever I hear a brother or sister say, “But the Bible clearly says that…!” Actually, it’s not always that clear on the details. Intentionally so.
In some ways we Quakers are like the Hebrews. Quaker process, however you define it, seems to allow for slow movements and time to let the Spirit work. This may clash with the values of our surrounding culture, but so much of Quakerism does. Or speaking more broadly, many of the values of the whole kingdom of God clash with whatever culture we happen to swim around in.
So here we are at the end of yearly meeting again, still immersed in ambiguity. I guess that means we have to keep waiting, keep listening, keep talking to each other.
And keep on hoping for a clear word from the Lord.
Posted by Nancy Thomas at 8:38 AM 7 comments: