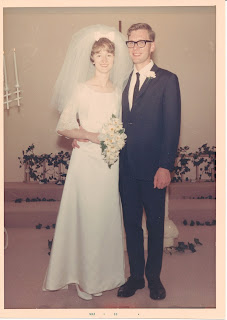 Hal and I celebrate our 50th anniversary this year. I never really thought I’d be old enough for this event, but here we are. We’ve decided to celebrate all year long, especially on the 23rd of each month. The real date is August 23.
When we became engaged we decided that we’d celebrate each anniversary with a poem. I’d write one for him and he’d write one for me. I still think that’s a wonderful idea. Very romantic. But real life is not always romantic, and if you want to know the truth, Hal owes me 49 poems.
Here’s one I wrote for him, years ago.

Long a connoisseur of the commonplace,
I flick cathedrals like lint from my sleeve.
Scholarly tomes slip-slide through the cracks
in my mind, leaving no trace.
Monuments (cheap, plentiful, easy to construct)
I erase from memory without compunction.

But the way you look at me
burrows deep, sequoia thick.
Your slightest touch leaves an indelible mark.


The lights in your voice are forever. 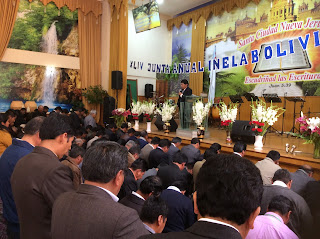 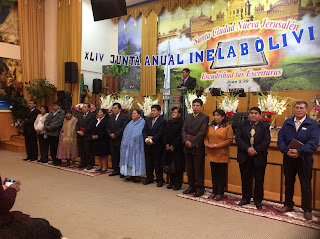 I made some observations about the ministry of women during the service. The first group of leaders to be consecrated were the members of the executive council of the church (the mesa directiva). The clerk asked that their wives accompany them to the altar, recognizing the importance of the couple and the role wives play. (Unfortunately, none of the mesa members this year is a woman.) Later, when the new leaders of the women’s organization were asked to come forward for consecration, their husbands were not asked to accompany them. I wondered why. For the valuable leadership and ministry these women offer, surely the support of their husbands counts for something. A delightful exception was the positioning of the new youth officers; half of them were men and half women. And in the past, young women have served as president.
Of all the district officers consecrated (a group of about 90 people), six were women, three of these representing the more progressive Santa Cruz District. And of the group of around 140 pastors gathered at the altar, three were women. We still have a way to go.
Before the end of the service, national president Hector Castro challenged the church to plant a new congregation in each of the 15 districts this year. And in his closing remarks, clerk Reynaldo Mamani remarked that, “We always have conflicts, but God always shows up and somehow we manage to do his will.”
Ukhamaw. Amen. So be it. 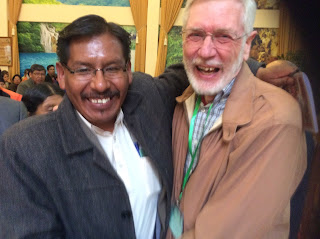 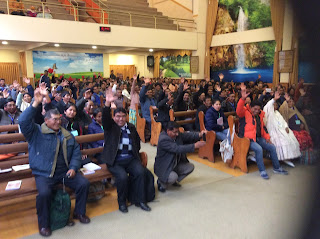 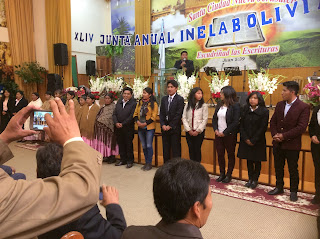 Consecration of women and youth officers 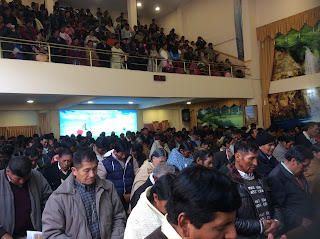 Bolivian Friends at prayer
Posted by Nancy Thomas at 8:44 AM No comments: