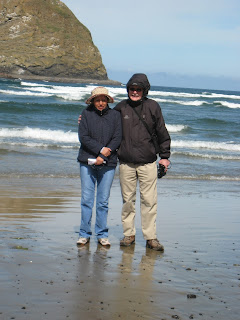 Since last Saturday, July 20, until last night, July 25, I have been heavily involved in Northwest Yearly Meeting’s annual sessions on the campus of George Fox University. It’s been a full week. Many aspects stand out in retrospect.
--The joy of renewed relationships from across the yearly meeting, and beyond.
--The fun of accompanying our Bolivian friend/Friend Alicia Lucasi. One of the best parts  happened before Yearly Meeting when we traveled west and introduced Alicia to the Pacific Ocean. (Bolivia is landlocked.) We also got to share our workshop with her Wednesday afternoon.
--The heaviness of being a new member of the board of elders. My next step is to learn to let this responsibility become part of the light load and easy yoke I bear with Jesus. But right now it seems weighty, and I’m asking myself, “Nancy, what have you gotten yourself into this time?”
--The gentleness of Friends process as we listened and spoke into the controversial topic of human sexuality. While nothing has been resolved yet, we do have consensus about treating each other with love and respect as we move forward.
--The messages of Richard Foster, reminding us of our strong center in “the One who speaks to our condition,” Jesus Christ. Times of praise, silent waiting, expectancy. 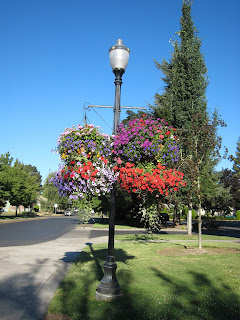 --The beauty of our university campus, mild weather, the hanging flower baskets, good food—all intimations of grace and glory.
--The active participation of our youth and their contribution in our meetings for worship and business.
--The commissioning of Elizabeth Todd as a Friend Serving Abroad in Ramallah. The vision of the Board of Global Outreach is to learn how to be a Friend of Jesus in difficult places. It makes me wish I were younger and could start over, possibly in Russia.
It was a good week, but I’m glad it’s behind me. It was a relief to sleep in this morning, a relief that will be short-lived as we prepare for our next trip. If anything, I sense a renewed call to pray for our yearly meeting, our pastors, our churches, our Friends serving abroad, and, certainly, our elders. May God have mercy on us all. May Jesus shine through us.
Posted by Nancy Thomas at 8:40 AM 1 comment:


I collect words.  Rather than dolls, coins, stamps or old cars, I gather quotations, descriptions and interesting specimens, delving into their histories when I can, and trying to understand their contemporary uses.
Recently in my reading I came across the sentence, “They were bodacious old men, the lot of them” (in Marilynne Robinson’s Gilead).  I immediately took to the word bodacious, enjoying the mouth-full-of-pebbles sound it has when said out loud, wondering what “bodacious old men” would be like and if I knew any.
Webster’s to the rescue.  I learned that the word combines Latin and Old English roots and probably was a blend of “bold” and “audacious.”  Yes, I do know some people like that.
George Fox and other Quaker ancestors come to mind. I love how Fox’s Journal dispels stereotypes of Quakers as silent, passive mystics who wear odd clothes and eat oatmeal. Fox confronted his context full of the energy and prophetic fire of the Spirit.  In short, he was bodacious.
Bodacious doesn’t necessarily mean noisy and rude.  In its most positive connotation, bodacious Christians are those who have the courage to speak and act, in specific times and places, according to God’s leading.
What are some of the ways contemporary Quakers are (or should be) bodacious?  I think of two of our core testimonies: 1) We hold that Jesus as the living Word speaks to us today. (This often, but not always, comes through the Bible, the written word, and is always in accord with biblical teaching.)  2) And we believe that as we follow the Word, God uses us as agents of peace and light in our context.
I teach a doctoral level class to Latin Americans on “Culture, Spirituality and Mission.” (For me, just accepting to teach this class was a risky, bodacious move.)  Last year the nine students who gathered in Buenos Aires came from Brazil, Chile, Argentina, Guatemala, the Dominican Republic, Puerto Rico and Hispanic USA.  They also represented as many different denominational traditions.
Class participation is always high and discussions often heated (part of the Latin American learning style). But at one point in last year’s session, I felt the discussion was getting out of hand and decided to introduce the Quaker practice of silence for group discernment. (After all, it was a class on spirituality!)  So I called (shouted, actually) the group to order and briefly explained the process.
The reaction was not what I expected. After a short, shocked silence, several students protested with obvious anger.  How could I suggest such a thing? Why was I trying to silence them?  Was I a facilitator or a dictator?  Again I tried to explain, but they weren’t buying it.  It became obvious that group silence was not going to work then and there, and we resolved the issue in other ways.  Later that day, the Brazilian student, the most passionately expressive of the group, apologized to me for his attitude, at the same time defending the importance of free, heated discussion.
While I agree with him on the value of open expression, including the right to disagree, critique and argue, I also believe that we Friends have certain insights and practices that would be of service to the greater church in learning to listen to God. And I believe there are ways to include God in our discussions, no matter how controversial.  (Yearly Meeting sessions are great training grounds!)
This year, as I teach the same course in Lima, I plan to prepare the class ahead of time for the possibility of “a spiritual experiment in group discernment.” Maybe then my call to silence in the middle of conflict will not seem quite so bodacious.
Peace-making in today’s world is a bodacious enterprise, whatever form it takes.  It requires humility and the mercy of God.  Let us live ever alert to the voice of Jesus in all the contexts and situations in which we find ourselves.  And then let us act and speak in ways that are appropriately (sometimes quietly) bold and audacious.  For the glory of God and peace on earth. 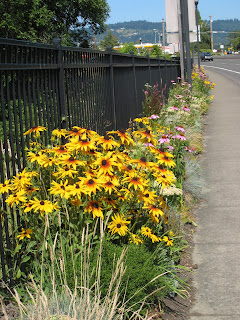 Being a God-spy requires the discipline of constant attentiveness. I confess to doing it better on some days than on others, but it’s a great exercise. Here are some recent grace-in-the-ordinary sightings:
--The intentional wildflowers that line the highway coming into Newberg: They lift my spirits all spring and summer long. Bravo, Newberg!

--Old houses: My walking routes around Newberg take me past some lovely old architecture. I like to imagine what these houses are like inside, probably full of all kinds of fascinating “crooks and nannies.” 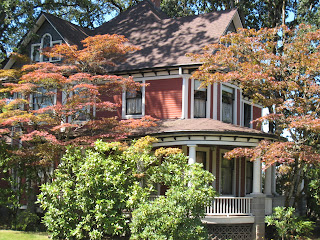 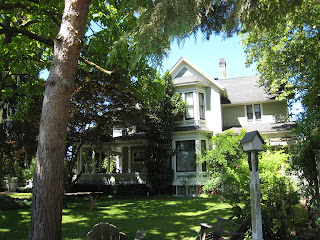 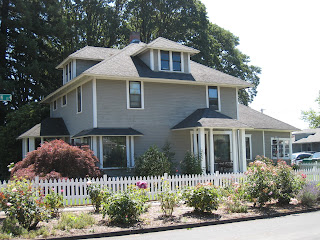 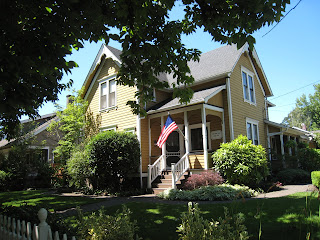 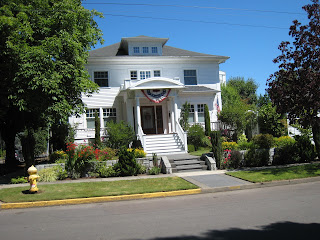 --Summer vegetables: As a little girl I never would have imagined my finding grace in vegetables. I’ve changed. I love my weekly walk to Ray’s Produce and find beauty in the bins. 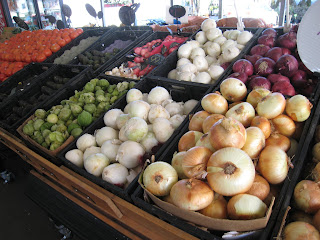 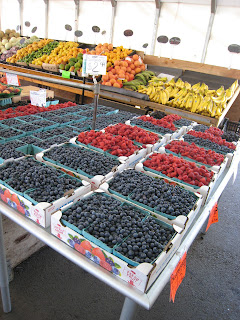 --A cold wet cat nose in my face: While I don’t always appreciate it at the moment, Chiri certainly provides me with a comical alarm clock. Plus it signals his affectionate nature.
--The unusual perspectives of autism: Returning home from church a few weeks ago, easing up the drive way, five-year-old Peter suddenly became very agitated. “Praise God, Mommy! Praise God, Daddy! Hurry up! Before the rocks yell!” He was yelling himself, almost out of control and full of fear. It seems one of the worship choruses that morning had the words, “If we don’t praise the Lord, the rocks will cry out!” He was afraid the rock waterfall and other boulders in the yard would start shouting any minute. One of the characteristics of autism is taking words literally. Peter doesn’t do metaphor. I’m still pondering his perspective on the relation between nature and worship.
--A steady diet of hugs: Good things happen when you marry your best friend. Even 44 years later.
--Christ in me, the hope of glory: Amazing. I could use a large dollop of glory about now. In the meantime, the hope of glory is no small thing.
Posted by Nancy Thomas at 6:51 AM 1 comment:


Sometimes stereotypes irritate me; other times they make me smile. I smiled last week as I read Alexander McCall Smith’s description of peacemakers, through the lips of the slightly audacious Precious Ramotswe of Botswana’s “No. 1 Ladies’ Detective Agency.” The following conversation takes place between Mma Ramotswe and an old friend from her home-village in the African bush:
“We need more women in public life,” said Dr. Maketsi. “They are very practical people, women. Unlike us men.”
Mma Ramotswe was quick to agree. “If more women were in power, they wouldn’t let wars break out,” she said. “Women can’t be bothered with all this fighting. We see war for what it is—a matter of broken bodies and crying mothers.”
Dr. Maketsi thought for a moment. He was thinking of Mrs. Ghandi, who had a war, and Mrs. Golda Meir, who also had a war, and then there was….
“Most of the time,” he conceded. “Women are gentle most of the time, but they can be tough when they need to be.”
Dr. Maketsi’s realism balances Mma Ramotswe’s stereotypical view of women as more naturally inclined to peacemaking than men. Since stereotypes are usually constructed on a grain of truth, the sense that women are the mothers and, usually, the nurturers of children lends some support to the image of the peaceful, gentle woman. But an open-eyed look at life affirms a more realistic assessment. It’s tough for human beings to live peacefully. Not natural at all. For any of us.
Let’s look at another large group of people around whom stereotypes seem to flourish—Christians. Do people outside the church stereotype us as being peacemakers by nature? Actually, no. A lot of sad history, plus the usual dollop of human nature we all inherit have produced other, more negative stereotypes. Even we Quakers sometimes seem to live in ways that negate our testimony for peace. Our history has its share of divisions and controversies, including disputes over peace.
Jesus spoke the words, “Blessed are the peacemakers,” for the whole church. Peter wrote to the early Christians, “Finally, all of you (not just Quakers and Mennonites), live in harmony with one another; be sympathetic, love as brothers, be compassionate and humble. Do not repay evil with evil or insult with insult, but with blessing….seek peace and pursue it” (1 Peter 3:8-9, 11, NIV).
I love Paul’s admonitions to the Philippian Christians: “Delight yourselves in God, yes, find your joy in him at all times. Have a reputation for gentleness, and never forget the nearness of your Lord (Phil. 4:4-5, Phillips).
There’s an ocean of difference between a stereotype and a reputation.
Posted by Nancy Thomas at 8:59 AM 1 comment: