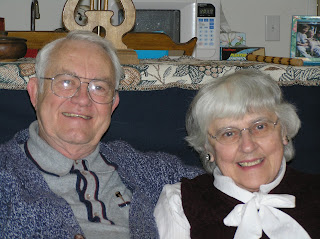 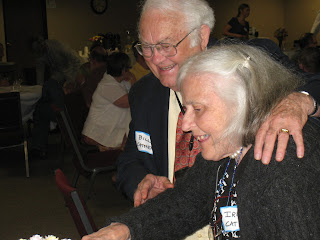 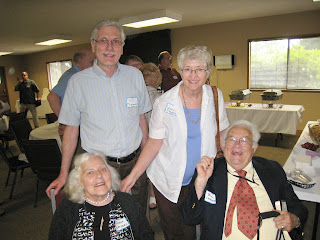 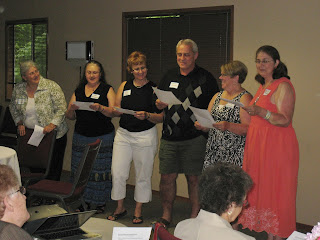 The light we cannot see

We’ve been in La Paz three weeks now. Yearly Meeting has passed, and Friends are back to work. For me that means hours of going through INELA documents for the 1980s, deciding what might have relevance for that chapter of the history, scanning, transferring to my computer, filing. I’m preparing for the work of analysis and writing I’ll be doing back in the US for the rest of 2016. I hope to bring the project up to 2010 by the end of the year, and I’m beginning to wonder if my goal may be too ambitious. The amount of paper to paddle through is daunting. And that’s even before I get to the archives back home in Newberg.
One of my ways to rest and play is reading, and my iPad is loaded with good books for this trip. One of the best, so far (and probably for the rest of the year), is Anthony Doerr’s All the Light We Cannot See, a book of historical fiction that takes place in France during World War II. The protagonists are two children, a blind French girl and a poor German orphan boy, on opposite sides of the war, both struggling through tragic circumstances, yet with minds-alive, eager to learn. They both manage to find good, the light hidden in this awful time in history.
The title sticks with me and is helping me find my way through the history of Friends in Bolivia. Much of the INELA’s story takes place in a background of oppression and struggle, and some of the internal patterns that emerge are dark. The human side of the church has to be acknowledged. I’m continually asking myself, “Where is Jesus in all of this?” I’m seeking the footprints of the Spirit, the grace that, however hidden, was there at every turn of events.
It helps to identify the evidence of God’s Spirit, alive and well today. Grace sightings. Here are a few that have popped up in these few weeks we’ve been here: 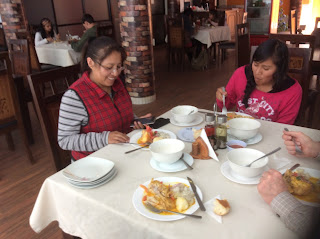 --The faithful, dedicated work of members of our history team, especially Humberto, Felix and Victoria. All the investigative trips out to interview old Friends have borne fruit, but have required sacrifice and hard work. Victoria’s patient work in the yearly meeting archives is finally bringing order out of chaos. (Victoria, above)
--The camaraderie and fellowship our team enjoys. It brings to life the concept that “The joy of the Lord is our strength,” and that this joy is often found in relationships as God’s children work together on a certain task.
--Sharing a meal with Palermo and Olivia, learning how God is helping them overcome economic hardships and build a life for themselves as young professionals.
--Sharing another meal with Tim and Elise, rejoicing in their new home and how it has opened up for them possibilities of ministry and hospitality. Tim is yearly meeting superintendent and represents a new generation of professional Aymara Quaker leadership. I sense in him the humility to relate to his past with gratitude, even as he moves forward.
--The joy of worshipping in the Aymara language, another vehicle of grace.
--The doves that coo above our door in the early morning. The sound of the hard rains that pound the roof at night.
--Fresh bread, fried country cheese, mangos and papayas any time we want them.
--Sun light illuminating the sides of the city that climbs the walls of this canyon called La Paz. The buildings shine. The distant Andes Mountains rise above them.


Lord, show me your grace, hidden in the ordinariness of life. Show us all the light we cannot yet see in the history of your people here in this place. Open our eyes. 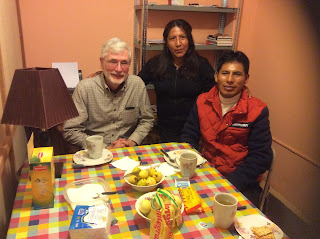 Sharing a meal with Olivia and Palermo

Hal and I landed in Bolivia on January 1 and five days later participated in the opening session of the INELA’s 2016 yearly meeting. (INELA stands for “National Evangelical Friends Church.”) For five days (Jan. 6-10) some 263 registered representatives of all the churches of the INELA gathered in La Paz to worship and conduct business, according to the customs of Friends. Here are some highlights: 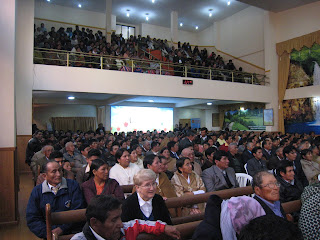 --Some considered the final approval of the new Estatutos (equivalent to the Faith and Practice of yearly meetings in the US) to be miraculous. The necessary revision process has been going on for more than 10 years, accompanied by controversy, even agony, and many drafts. We spent several days reading aloud the whole document with its over 100 articles, making observations, and, section by section, approving it by consensus. INELA president, Timoteo Choque, along with the Estatutos committee, will spend much of 2016 obtaining legal government approval of the document, in order for it to come into practice in 2017. Choque’s experience as a lawyer has been most helpful in this whole process.
The new Estatutos affirms the INELA’s status as an evangelical, Christ-centered Quaker yearly meeting, and adds a section that establishes the Quaker principles of simplicity, peace, integrity, community, and equality. It makes major structural changes, putting the executive authority back under one national committee, followed by 15 district executive committees that maintain the broad participatory leadership base of the church.
--Another major change is the formation of a commission (responsible to the national executive committee) for church discipline, called the commission for “Admonition and Restoration.” In contrast to the rather harsh disciplinary procedures of the past, this commission is to emphasize restoration of pastors and leaders who have fallen into some kind of moral problem.
--The annual reports of the national women’s and youth organizations are always a highlight. These groups provide much of the sacrificial energy to carry on the ground-level ministry of church, and the representatives appropriately and enthusiastically affirmed their reports.
--The new social action branch of the INELA, El Buen Amigo (The Good Friend), gave its report which was also received with appreciation and enthusiasm. This group of mostly university and professional volunteers represents the young idealistic branch of the yearly meeting. In many of their projects this past year, they worked alongside the Missions Commission in new areas, conducting medical or dental clinics, teaching, and affirming new believers. They provide a light of hope and an outlet for young people anxious to “do something” for Christ and their society.
I could report on much more, of course. Sunday morning’s concluding worship service began at 8:30 and ended at 1:00. One by one different groups of leaders came forward and were “consecrated” for a new year of service, a ritual that is very meaningful in this context. I was especially moved to see the district executive councils crowding the front of the temple; the 15 districts of the church were all represented, again emphasizing the communal, highly participatory leadership of the INELA. Likewise, the pastors of the 200 congregations came forward to receive words of dedication and encouragement for the new year.
The choir of the New Jerusalem Friends Church (where we were meeting) gave a rousing presentation that included two original Aymara hymns and two historic hymns of the Christian church, “A Mighty Fortress Is Our God,” and “Onward, Christian Soldiers.” The uniqueness of the Aymara Friends Church thus flowed into the greater stream of the Body of Christ throughout the generations. It brought tears.
I confess to sleeping through much of the sermon, the last hour of the service. I’m reasonably sure it was good, given by one of our pastors from the upper city, El Alto. The loud “amens” at the end woke me up, and we all joined in the final song and prayer. And then came the communal meal in the patio behind the church, where different congregations and districts spread their offerings on blankets on the ground. Hal and I went from group to group and ate more than we should have, but it was all good, flavored by the love and dedication of these Andean Quakers.
We are blessed to have been adopted into this family of Friends. 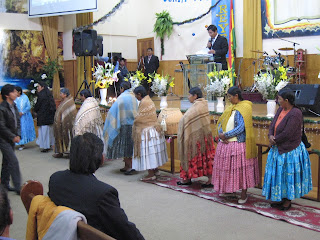 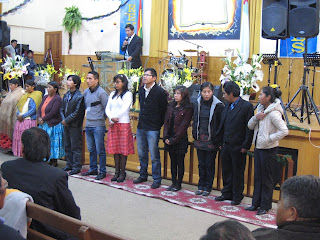 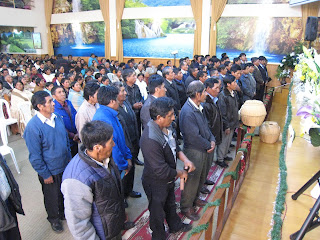 Consecration of leaders of the 15 districts 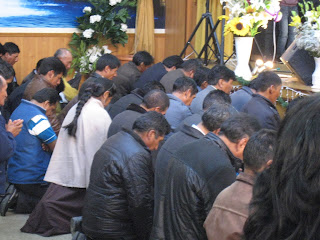 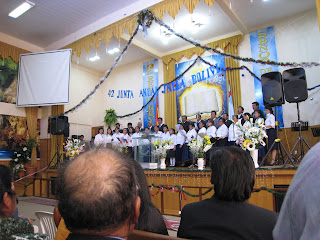 Sing to the Lord!