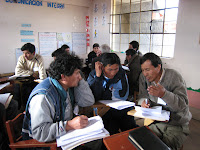 All of these stories give insight into the faith and life of Andean Quakers. It is my prayer that they will enrich and encourage all who read them, both in and beyond the Quaker community. It’s time to let their voice be heard.
Posted by Nancy Thomas at 3:32 PM