Joseph, Teresa, Paulo and me

For the last week I have been here in San José (Saint Joseph), Costa Rica, teaching the class “Culture, Spirituality and Mission.” This is part of PRODOLA, the Latin American doctoral program in theology. It was a different experience as I had only one student in my class, the others having dropped out for various reasons. Paulo Oliveira is a Brazilian translator, a member of Wycliffe Bible Translators. For 17 years Paulo and his wife Quezia have been working with the Tembe tribe of Brazil, living in a village, learning the language, “reducing” it to writing, and beginning the translation of the Bible. Early in the week, Paulo gave me a copy of the book of Luke in the Tembe language, hot off the press, and during the course of the week, he got word that the whole New Testament had just been delivered. The celebration and distribution wait for his return to Brazil. This represents a significant milestone.

Paulo and his family now live in Brasilia, in part due to the availability of resources for his son who has learning disabilities. His new role in Wycliffe is as a trainer of other translators, especially in the areas of anthropology and missiology.

We had a good week. The “class” was more like personal tutoring, and we talked our way through the material, applying everything to Paulo’s ministry situation and research project. We both learned a lot.

One of the themes we explored was the great Spanish mystics of the 16th century (Ignacio Loyola, Teresa of Avila and John of the Cross), their influence on Latin American Christianity, and what they might have to say to contemporary evangelicals on the continent. This is potentially controversial, given the anti-Catholic stance of much of Latin American Protestantism, but students at a doctoral level usually have an open mind and a willingness to explore.

The mystics always surprise me. I’m especially drawn to Teresa, with her fertile imagination (her images of spirituality are literally wonderful—full of wonder), her deep sense of intimacy with God, her encouragement to grow, and a humility that pops out here and there, in the midst of her incredible experiences (some of which scare me more than they attract me).

Teresa wrote her autobiography and her books on prayer out of obedience. Her superiors in the Catholic Church wanted her to put in writing her experiences and her teachings on prayer, for the benefit of other monks and nuns. Reluctantly, she put pen to paper. One of my favorite quotes comes from the introduction to one of her books, written by a friend and admirer. P. Gracian quotes Teresa as saying, “Why do they want me to write things?... Let learned men, who have studied, do the writing; I am a stupid creature and don’t know what I am saying. There are more than enough books written on prayer already. For the love of God, let me get on with my spinning and go to choir and do my religious duties like the other sisters. I am not meant for writing; I have neither the health nor the wits for it.”

I find that refreshingly funny, coming as it does from one who is now considered one of the greatest authorities on contemplative prayer. Apparently even Teresa struggled with the man/woman thing, feeling at times inferior, wanting to just be left alone. She might have been a good candidate for the Quaker movement, if only she had been born a century later, in a different country.

As a writer/teacher/pastor, I am sometimes tempted to say, “Enough! Let learned men do it! Let me get on with my spinning, etc…” (Actually, I don’t spin.) This is in part due to having a quiet personality. And, as in Teresa’s case, there have been many who have encouraged me to get over my reluctance and make my contribution. I’m grateful.

I’m grateful for the example of Teresa of Avila, and for those who insisted she write. I’m grateful for the chance to know people like Paulo Oliveira, to understand his life of joyful sacrifice, and the contribution he is making to the extension of God’s kingdom in Brazil. I’m grateful to be here this beautiful city named after Saint Joseph.

And now, back to my spinning…. 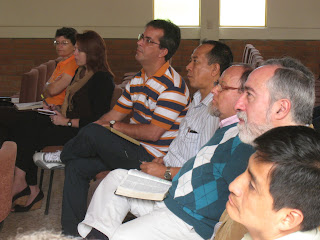 PRODOLA at worship; Paulo is wearing the bright stripes. 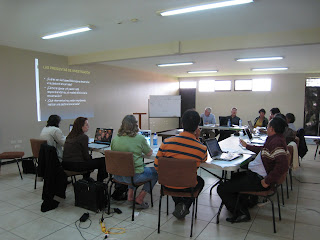 The 2009 cohort group in a seminar on research design. 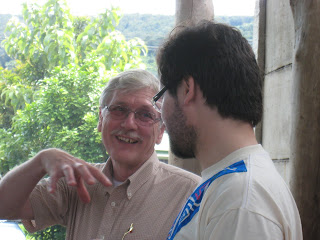 Hal in animated conversation with Luis Cruz of Chile. 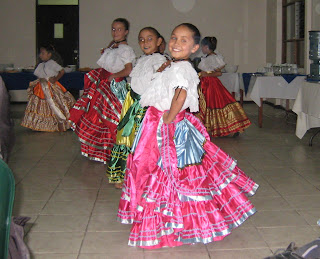 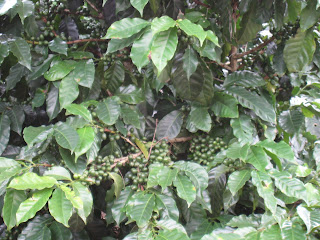