On birth, life, hair-snakes and death

September 29 (Feast Day for the archangels and me)
Today I celebrate 65 years of life. I used to think that was old. I know better now. I have a great job that lets me contribute to the building up of God’s kingdom on earth. I still enjoy being married to my best friend, plus I have warm relationships with my grown children and their children. I experience the reality Paul wrote about when he stated that “Though outwardly we are wasting away, yet inwardly we are being renewed day by day” (2. Cor. 4:16). Actually, at this point in time I have only hints of the outward-wasting-away part. I still ride my bike. And more importantly, I still write poetry. 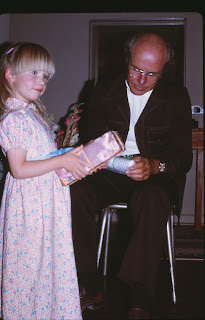 Yet some things are different. Mainly, I now go to more funerals. And it’s not just the funerals of “old people.” Now I face the deaths of people who were my mentors and friends. This year has been especially heavy.
I just learned of the passing of Roscoe Knight. Roscoe and Tina have been mentors and close friends to Hal and me for almost 40 years. Pioneer Quaker missionaries to Bolivia, they first went to the field in 1945, the year I was born. They were there in the early years of our missionary service, our co-workers, mentors and encouragers. They knew David and Kristin as babies, kids and young people. In fact their participation in the lives of all the missionary kids characterized their friendship. Roscoe loved the kids.  (Photo is of Kristin and Roscoe in 1978.)
Two nights ago our son David couldn’t sleep, thinking about “Uncle Roscoe.” He got and wrote down his thoughts. They included this story of one of Roscoe’s many jokes:

On holidays when the extended Friends missionary family would get together we kids loved gathering around Roscoe to hear his stories and jokes. On one holiday, the adults were scattered around the room in groups talking about their important stuff. We kids were with Roscoe. He had been talking with us for a while when he told us that he could make a human hair turn into a snake by magic.

Roscoe said, “No, I mean it; it really is possible. But snakes are dangerous. No, we better not try here. A poisonous snake and all these little kids. It just wouldn’t be safe.”
We said, “Oh, please show us!”

Roscoe said “Are you sure you want me to try?”

“OK, but we’ve got to be careful. I’ll need a hair and a glass of water.” Some of us offered our hairs, but he refused most of them. They were either too short, or had some other sort of problem. As best I can recall he chose one of Sara Stansell’s hairs because it was long enough and he felt it would make a good snake.

He poured the water in a nice thick puddle on a table. “Now look very carefully, but be patient. It takes a minute or two to start growing into a snake.” Then he carefully took the hair and laid it on the water. “I think I saw it move a little.”

Roscoe said, “You’re too far away to see. Get closer, so you can see him grow. There, see his tail moving?”

We all leaned in closer. And you know, it did seem to be moving a little. And it was true that Roscoe knew his snakes. We studied that hair closely.

We all came up stunned, sputtering and dripping wet. “Why did you do that!!?”

Roscoe, just as surprised as all the rest of us said, “Well, I had to kill it before it got too big and dangerous.”

Typical Roscoe Knight. I remember that joke, too, as well as my own wet face. And I remember all the attention Roscoe paid to the kids, letting them know they were valuable people in their own right.

David ended his reflections with these words: “I want to run my race like Roscoe ran his, with a deep faith in Christ, with a joy and zest for life, with a gift to make others feel valuable, and with a passion to see the Good News of Jesus free people still trapped in darkness.”

Well said, David. Well done, Roscoe. I celebrate your life today, even as I celebrate my own. As I imagine sharing my birthday with the archangels, I realize there’s now one more person at the party. I’m thankful for you and your life.
Posted by Nancy Thomas at 9:54 AM