From illegal alien to Comfort Cat

I never meant to commit a crime. The situation crept up on me. We knew the rules. And while we didn’t like the by-law that prohibits normal pets, we wanted to live here, so we agreed to abide by the law. The non-normal pets that are allowed require that the resident have a certified disability and a doctor willing to state in writing that a pet would help her patient cope with life. We had no such disability and no such doctor. Or so we thought.
Two years ago our son and family came home for a year’s break from their overseas assignment. The rental they moved into not only came furnished, it came with cats. Two of them. In spite of my daughter-in-law’s allergy to cats, the kids were so excited, their loving parents decided to see if it might work out. Anything to help them adjust to life in the United States.
One night David called me, saying, “Debby can’t take it anymore. I’m bringing Spencer over right away.”
What could we do? It was clearly an emergency situation. Of course we couldn’t keep the cat. By-laws are by-laws, and we had pledged obedience with our signatures. But in a time of need, one simply has to step forward.
So Spencer moved in. Spencer is a long-haired yellow cat with an affectionate nature. Although he spent the first three days and nights under our bed, once he came out, we bonded. We changed his name to Chiri after a beloved yellow beast in our past (it means “cat” in the Quechua language), and that name change alone should have warned me.
Several months went by, and I occasionally noticed we were not doing anything about finding Chiri a legal home. We didn’t try to hide him. The living room window sill was a favorite perch, right in full view of our community. While no one said anything for a long time, we knew they saw him there.
Chiri has some charming qualities. In the early morning hours, after I get my cup of coffee and settle in my easy chair, he crawls up onto my chest, stretches out and begins to purr. Loudly. He occasionally looks directly into my eyes. Nose to nose. That’s not my favorite part; his nose is always wet and cold. But it’s a sweet gesture. We do our morning meditations together.
He tries to be helpful in ways I don’t always appreciate, but I honor his good intentions. For example, in a strange penchant for neatness he loves to bat small objects off the coffee table and the bedside stands. Pens, pencils, cough drop wrappers, notes written on small pieces of paper, etc., these he helpfully shoves to the floor, thus tidying up the room. Somewhat.
And he has become my self-appointed alarm clock. He sleeps on the end of our bed and loves it that I get up early. But on those occasions when I’m not up by 5:30, he comes right up, sticks his cold nose into my face and begins the loud purr. If I shove him off, he comes back until I get up. Sometimes I think it’s cute. Sometimes I don’t.
At any rate he’s squiggled his way into our lives, and we like having him around. 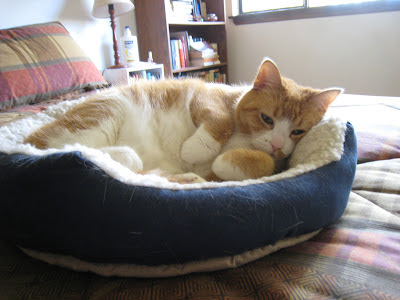 So.
We knew we couldn’t indefinitely go on breaking the rule. We decided we’d like to approach the community about a change in the by-laws, and that might happen someday, maybe even this year. In the meantime, we needed to do something more immediate. A friend in the community suggested that if we approached it right, we might be able to get our doctor’s signature and begin the process of legalization. So we decided that our “disability” was that we are human beings, and that an affectionate relationship to animals does indeed help us cope with life. We wrote up a letter according to a form we found and presented it to our doctor. She laughed and gladly signed it. And without comment, our community association passed a minute declaring that Chiri is now an official Comfort Cat.
If anyone ever refers to him as a Therapy Cat, I will have to start taking appointments because he’s really good at what he does.
Posted by Nancy Thomas at 11:50 AM