--The air I breathe: After three weeks in the high altitude of La Paz, I’m very conscious of the thick oxygen-rich air of Santa Cruz. My whole body is relaxing. I usually don’t pay attention to air, but right now I breathe it in as pure grace.
--The stories I hear: Last Sunday in church, still in La Paz, a Quaker Aymara woman named Rosario gave a testimony that matched the stories I hear coming out of the house church movement in China. She told of persecution of Christians in her village and of how one night the villagers decided to attack as the believers were gathered in a home. But as they approached, they were surprised to see the house guarded by police, and they had to give up. Of course, there were no police. What a unique disguise for angels! 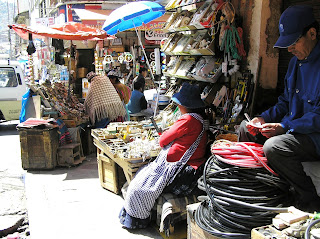 Another lady told the story of a time a few months back when the church was sponsoring a day of prayer and fasting. She sensed God wanted her to participate, but she didn’t feel she could afford to miss a day of work. She has a booth on the streets of La Paz from which she sells food to meet her family’s needs. Finally she gave in out of obedience to the voice of the Spirit, and went to church. That evening she discovered that a truck had crashed into the site that day, killing two people and injuring several others. Her booth had been completely demolished. Since that time she has recovered her business.
--Long-lived friendships: Susan, Ruth and I met weekly, for years, to pray for each other and our families. That was back when we all had babies to care for. When we get together now, it’s like no time has passed. Except that now we pray for our grandkids.
­­--Old friends in the pages of well-worn books: Some enterprising parasites have forced me to spend time quietly reading, and I’ve been getting re-acquainted with my old friends Bilbo and Frodo. These old paperbacks still have my maiden name written on what’s left of the covers. It feels good to immerse myself again in the charm of unlikely heroes and common grace. 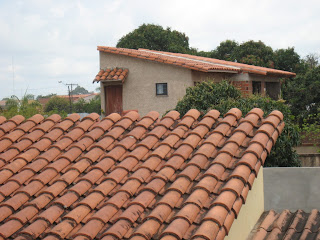 --The year-round Christmas colors of Santa Cruz: Looking out over the neighborhood from my second story apartment, in every direction the red tile roofs contrast to the many shades of green as the tropical trees sway in the wind.
­--Going home: Our bags are packed, except for Hal’s inevitable last minutes projects. Later tonight—or better said, tomorrow morning, at 2:30—we board the plane for the first phase of our journey. Tomorrow night I will again be in my own bed.