Yesterday the faculty of George Fox University honored Arthur Roberts, Quaker professor, philosopher, prophet and poet. (I would add theologian, mentor and friend, but they don’t begin with “p.”) We ate together and listened to some inspiring testimonials. The event truly did honor Arthur.

A month ago, I was invited to write a poem for the occasion and then read it at the ceremony. This is something Arthur frequently did in his poet role. I accepted the task immediately, but with some inner shaking and quaking. Arthur is such a huge presence among us, and his influence in my own life has been profound. How could I capture anything significant in a single poem? 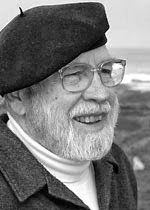 I discovered I couldn’t. But during a week of personal retreat on the Oregon coast, I took time to remember, reflect, and read again some of his poems, as well as favorite underlined passages in his other writings. A deep sense of gratitude bubbled up, as well ideas for many poems. I was able to write out some of them.
I chose to read aloud a poem that focuses on Arthur as professor, since this was an event sponsored by the faculty of the university. I was also compelled by the realization that it was exactly 50 years ago that I entered GFU as a freshman and took my first class from Dr. Roberts.
Here is what I read:

From Professor to Pastor
“I discovered that to teach is to endure some loneliness and that such loneliness comes to all who offer their gifts on the altar of God.”  (From Drawn by the Light: Autobiographical Reflections of Arthur O. Roberts, 1993, The Barclay Press, p. 158)
1
That first class some fifty years ago
was entitled Introduction to Philosophy
and proved to be my introduction to the world
of abstract thinking. A shy and concrete
country girl from Ramona, California,
I felt as overwhelmed by Roberts
as I did by Plato, Kant and Hume.
My greatest fear was that I’d be called on
to say something in class.
But I did my assignments,
waded through the reading, wrote
the essays, and halfway through the course
noticed that someone
had opened the windows, that light
was coming in, that the world had grown
bigger than I ever knew it to be.

2
At the end of my freshman year
I was chosen to be part
of a group of students
involved in Intensified Studies, IS.
Someone, somewhere thought I was smart
enough. Dr. Roberts himself was to be
our guide. We would read a book
every two weeks and come together
to discuss it. Two reactions bubbled
in my gut as I entered that second year:
pride and panic. Pride to be among
the elect and panic in knowing
I could not hide in so small a group.
Every two weeks I’d have to talk
in class. What would happen if they
discovered me to be inadequate?
What would happen if I did?

3
After four intensified sessions
I made an appointment with Dr. Roberts.
He had invited us to do so at any time.
I had to tell him that I was not stupid;
I was shy. I wasn’t sure if he, or anyone else,
knew the difference. I waited outside his office,
muscles tensed, wondering what to expect.
What I found, once inside,
was not a professor  but a pastor.
Encouraged forward in gentle conversation,
I forgot to be afraid. He told me he himself
had, on occasion, experienced loneliness,
felt shy. He said he never even
suspected me of stupidity. I believed him.
Before I left, he had one more thing
to say to me, and with this he got down
to the core of the matter.
Dr. Roberts told me that with
a little time and practice, he knew without
a doubt that I would learn how to talk with boys.
I left his office relieved on several accounts,
and affirmed not only as an intelligent person,
but also as a young woman and a disciple of Jesus.
It made all the difference.