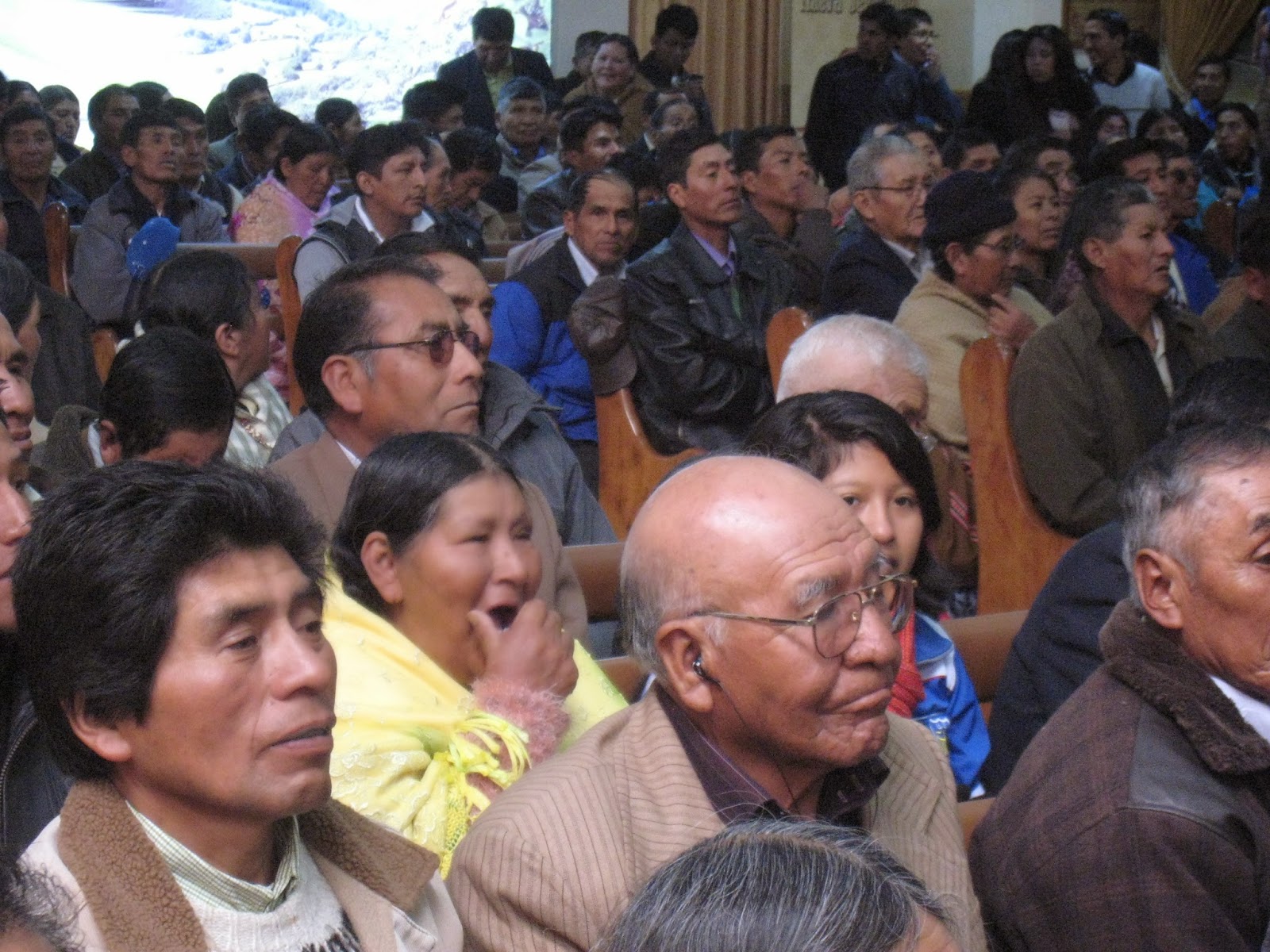 Yesterday (Sunday) we concluded the annual marathon of meetings, reports and worship known as Yearly Meeting. For four days, 250 leaders and representatives of the different districts and congregations met together to hear reports, consider projects, and reflect on the challenges facing the church. Hal and I represented Northwest Yearly Meeting as visitors and participants. In many ways, it felt like coming home. Here are some highlights:
--The good leadership of President Timoteo Choque: He began the sessions with a meditation from Phil. 4:8 as a positive approach to the issues the church is facing. He asked people to make their contributions to the sessions positive, even when giving criticism. And throughout the meetings he brought people back to this concept. He is trying to deal with the Aymara cultural tendency to level leaders and focus on the dark side. It’s an uphill battle, but I see growth and transformation. 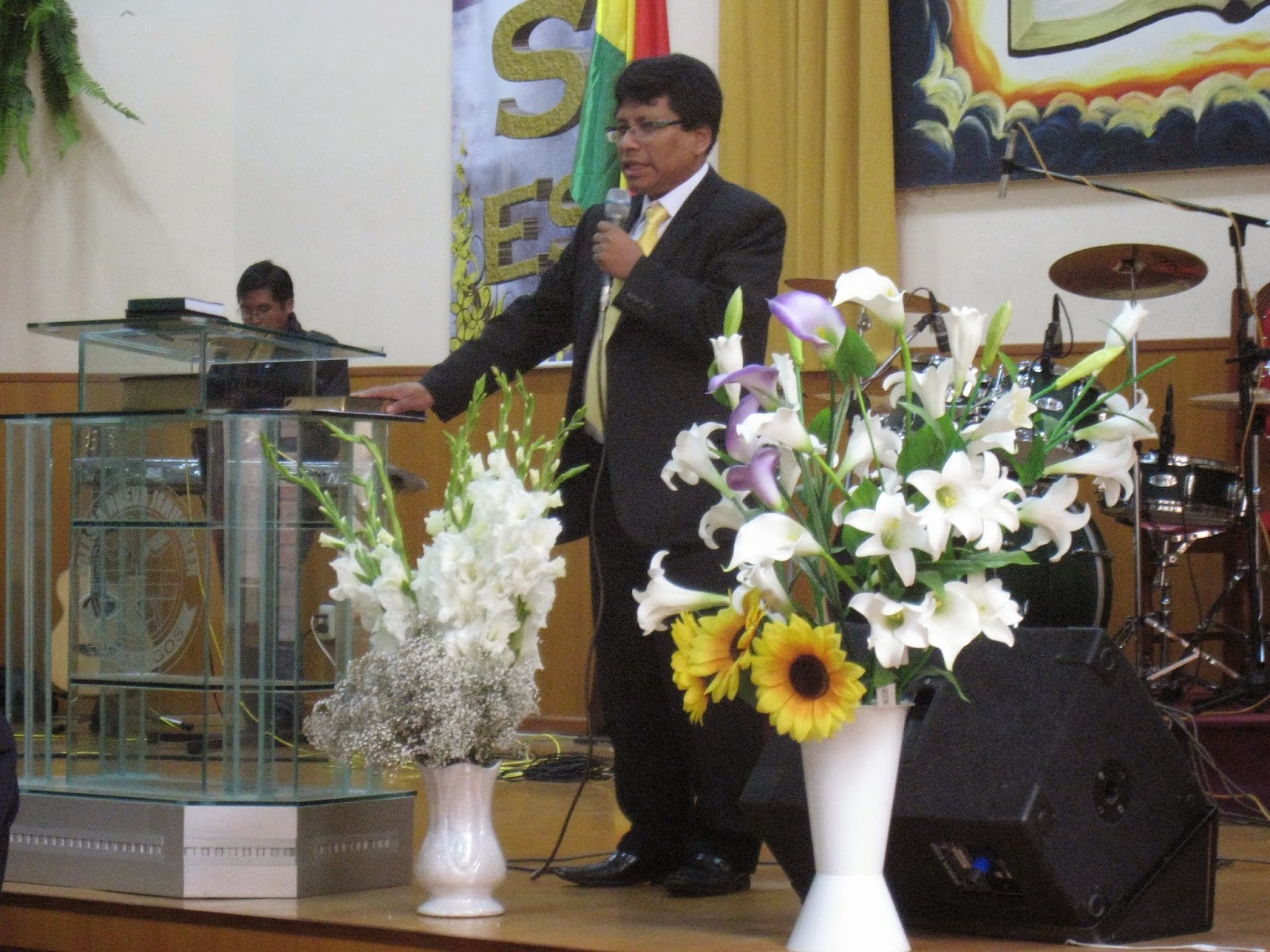 INELA President (superintendent) Timoteo Choque
--Administrative growth: I appreciated the forms that have been developed for debate and participation. Business was carried out in an orderly manner, and the level of participation was high. People showed respect for each other. All this was not without its humorous side. In an attempt to promote being on time, late-comers were locked out of sessions until roll was taken, then made to come to the front and collectively “pay a fine,” usually in terms of reciting a Bible verse. On the afternoon of the highest level of tardiness, the group sang “Many sons has Father Abraham,” complete with motions. It was hilarious. 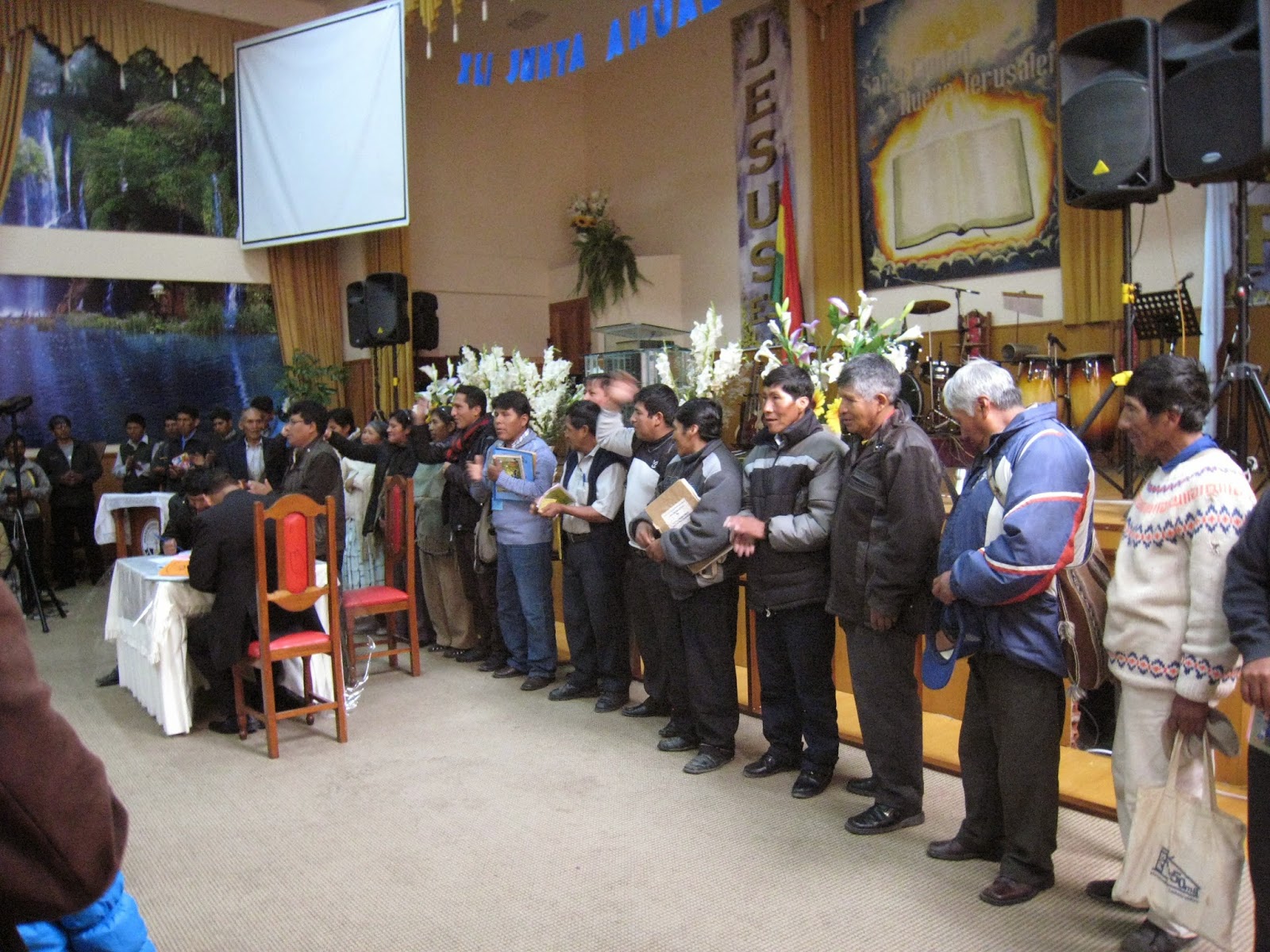 The latecomers "pay" their fine.
--The complexity of the issues facing the INELA, many of which come from the pressures of the government to rein in religious expression, and the extreme insistence on detailed rules and regulations: It feels like the church is walking a tightrope in this time and place. 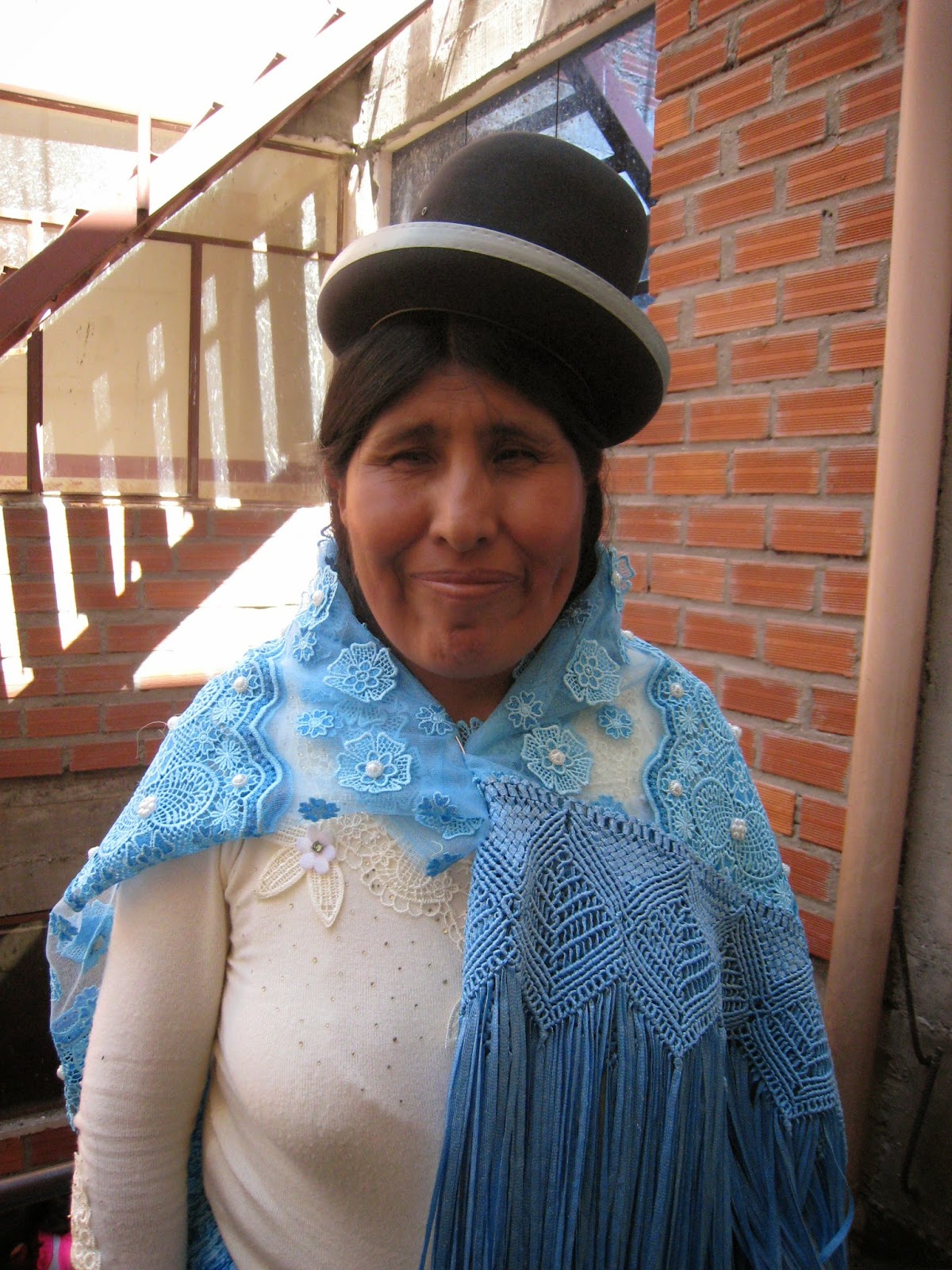 --The sacrificial work of the women’s organization (UFINELA): After their report of trips and offerings during 2014, mostly in pro-mission outreach work, the assembly applauded. This expression of appreciation encouraged me almost as much as the report itself. Expressing appreciation is not necessarily an Aymara trait. But it is a Christian trait. 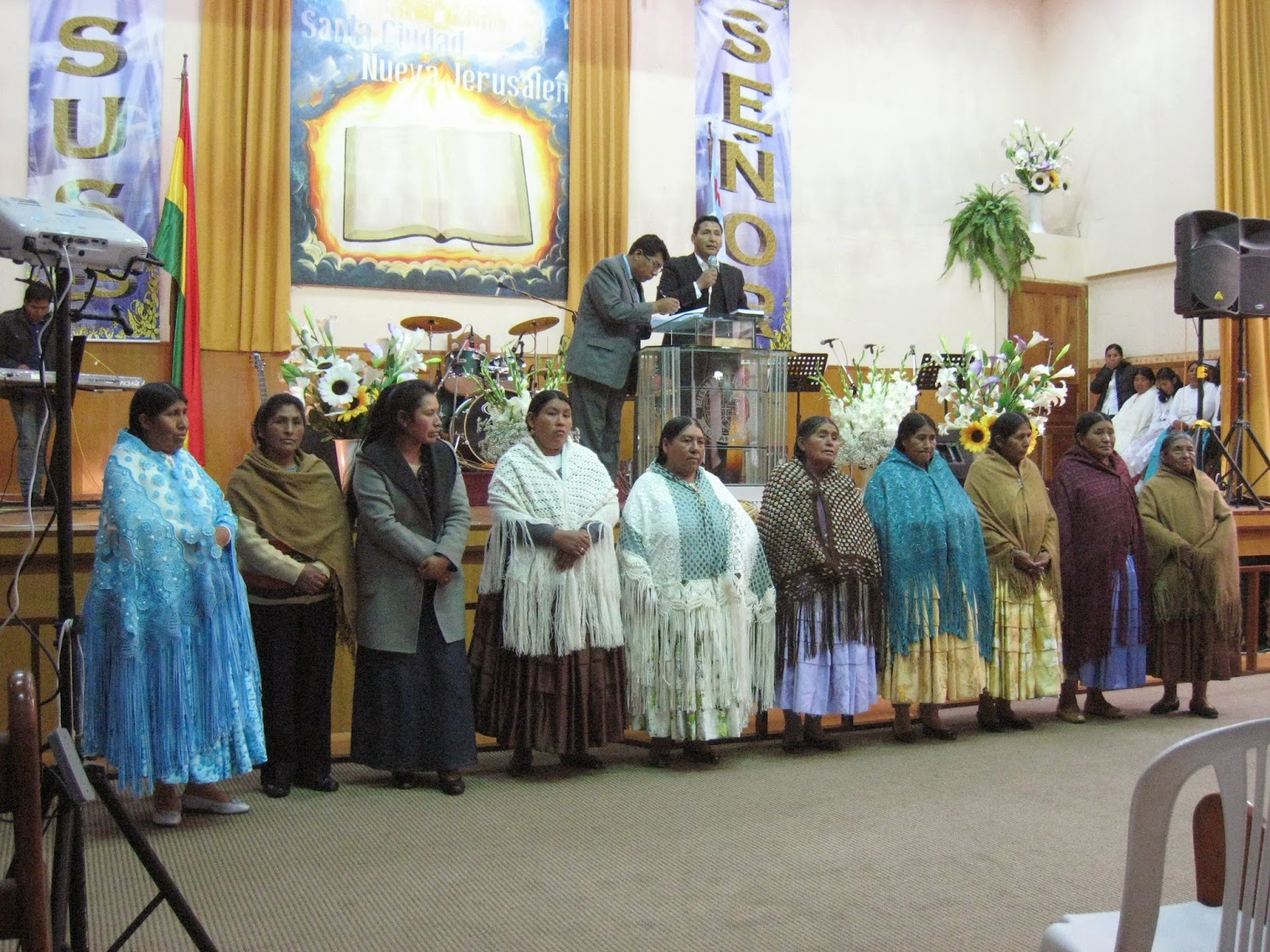 New UFINELA president Basilia de Mamani (above) together with the officers for 2015
--The creation of a new volunteer relief and social action group, El Buen Amigo: This group, composed mostly of young adults, has been several years in its formation. This last year they organized relief work for the lowland church communities that experienced flooding. They also conducted medical clinics in several villages. During yearly meeting they introduced a new project of help to older members of the community. In introducing the project they called up three representative “old men,” one of which was Hal. Admittedly, he had one of the whitest heads of hair present.
--The sense of the Spirit moving the church to a greater breadth and depth of mission outreach: This was especially manifested on Saturday as we heard reports of the three new works in different areas of Bolivia and of the new congregation in Buenos Aires. We were encouraged to expand our vision as two young Bolivian Quakers shared their calls to go to India and China, respectively. The session ended in tears and prayer, and a sense of excitement, wondering where God will be taking us in the next few years.
--The concluding worship service on Sunday morning lasted six hours, but the time went by quickly. In between worship in music, times of prayer and a message from President Timoteo Choque, we called forth the different leadership groups (yearly meeting, departmental and district officers, women’s and youth organization leaders, the history commission, and pastors) for presentation and prayers of consecration. It was especially moving to see how the breadth of our leadership base. The Quaker value of horizontal leadership, a focus on the priesthood of believers, was plain to see. 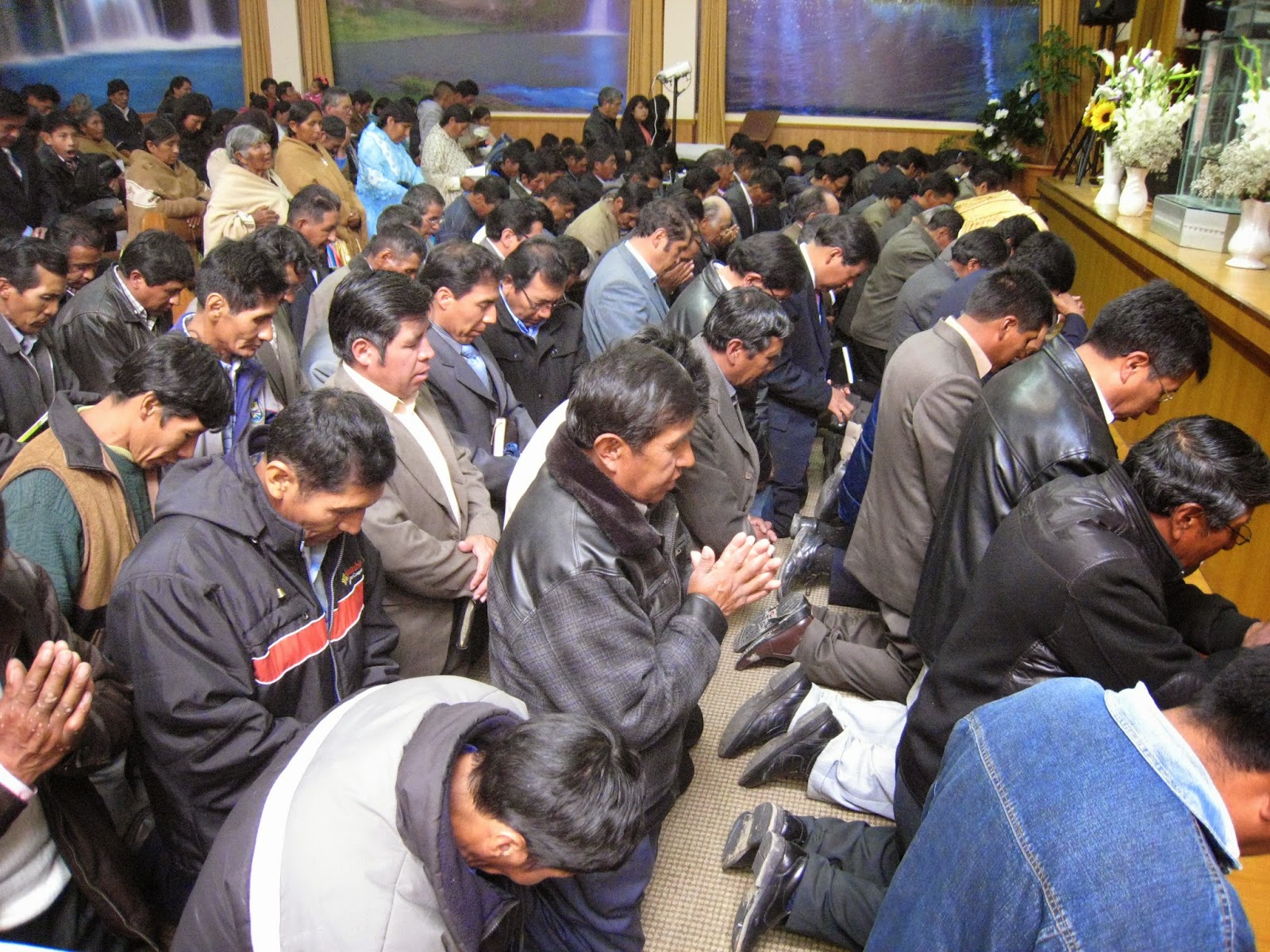 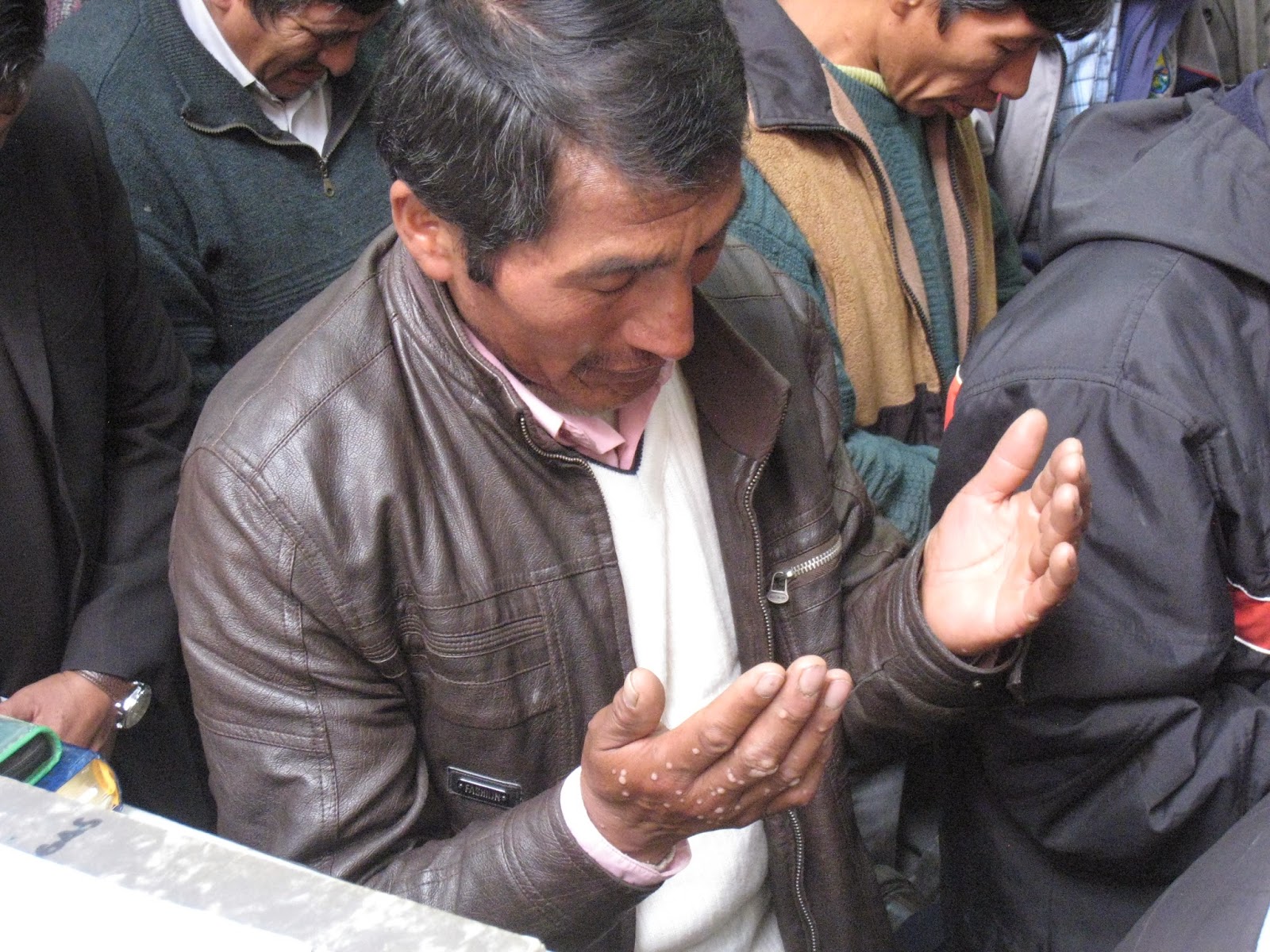 Consecration of pastors on Sunday morning


I feel strengthened and encouraged once again, acknowledging that the Friends Church in Bolivia belongs to Jesus.
Posted by Nancy Thomas at 11:11 AM