At the end of my rope 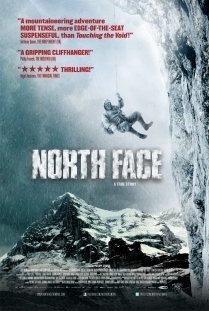 The cliché, “at the end of my rope,” was graphically illustrated for me by a Netflix movie I watched the other night. It’s not one I would have chosen. Hal and I were in Springfield to help Jon and Kristin re-shingle the roof, a gigantic end-of-the-rope task whose successful execution was made possible by the small army of volunteers that showed up, among whom were ourselves. But we did it, plus a few other tasks. We decided to relax with a movie Tuesday night, and the men chose the “adventure” category. (Kristin and I, left to ourselves, would have opted for “romance.”)
We came up with “North Face,” a blind choice about mountain climbers. A German film, complete with subtitles, it portrayed the true story of four young men who attempted a difficult peak in the Alps in the early 1940s, all to the honor of Hitler and the Cause. They didn’t make it, and one of the final scenes showed the remaining climber literally dangling in the freezing air from the end of his rope while his girlfriend, part of the rescue party, clung to the side of the cliff watching him slowly turn black and die. Her tears froze to her face. So did mine, even though it’s summer here.
That image continues to spin in the spaces inside my head. I’m facing several situations that, while not quite so dramatic, make me feel at the end of my rope. One has to do with young Peter, my four-year-old autistic grandson. I spent most of my time this week with Peter and his siblings, while Hal played around on the roof. As he grows older, Peter’s autism seems to manifest in stronger forms. Or maybe it’s just the combination of the condition with the normally strong will of a four-year-old who is learning to test the limits. We’re learning, too. We’re learning how to work with him to help him develop life skills and relational abilities. But sometimes I wonder if I don’t over compensate for the autism, and let him get away with things I wouldn’t tolerate in his brother or sister. I narrowly averted several meltdowns this week, and this leaves me exhausted. I love him, and I sometimes feel like I don’t know how to help him. Am I the one dangling at the end of the rope or the one on the cliff with frozen tears on her face? (Just putting it that way makes me laugh at myself. I feel perspective returning. I’m really nowhere near that cliff, but I am perplexed and troubled.)
The other end-of-the-rope situation has to do with our up-coming trip to Bolivia. We leave in two weeks and we are far from ready. I’ve dangled from this particular cliff before, and I should be used to it. But I’m not. By invitation of the Bolivian Friends Church we will be facilitating a consultation on the gospel and Aymara culture. It’s a crucial theme at this time in Bolivia’s history with an indigenous revitalization movement in full swing and pressure on Aymara Christians to return to the old ways, offer the sacrifices to mother earth and engage in numerous animistic practices. Some respond by capitulating. Others by completely rejecting their traditional culture. A few are finding ways to be Aymara and, at the same time, follow Jesus. This, of course, is the path we want to encourage our brothers and sisters to explore.
The consultation is to be a two-weekend intensive time to gather around the Scriptures, consider the values of the context, weigh the challenges, and prayerfully find healthy ways forward. Several institutions are co-sponsoring the event, with Hal leading and coordinating. While this is the area he has been working in for years (even doing a doctoral dissertation), we don’t feel ready. It’s been hard to virtually coordinate our team, and we’re probably looking at a lot of last-minute face-to-face assembling of the program. That makes us nervous.
Since starting this blog and finishing it, we ate breakfast and read Colossians 1. We decided to read and pray the book of Colossians these next few weeks as a means of spiritual preparation. I again find my perspective shifting. Rather than focus all this nervous energy on getting ourselves prepared, we will lift up our beloved Aymara brothers and sisters, using the words of Paul’s prayer: We are “asking God to fill you with the knowledge of his will through all spiritual understanding. And we pray this in order that you may live a life worthy of the Lord and may please him in every way: bearing fruit in every good work, growing in the knowledge of God, being strengthened with all power according to his glorious might so that you may have great endurance and patience, and joyfully giving thanks to the Father, who has qualified you to share in the inheritance of the saints in the kingdom of light.”
Of course we will do the hard work of study and preparation, but finding the right perspective makes all the difference.
We’re nowhere near that dangling rope.
Note: Several months ago I came to the realization that for me writing is a spiritual discipline. It’s one of the ways (along with prayer and the Scriptures) that I do my part toward spiritual maturity, so that the Holy Spirit will do her part. This morning’s blog illustrates that. I literally wrote my way from the end of that rope to insight and hope.
Posted by Nancy Thomas at 8:54 AM