Dreams, drama and a thesis defense

Sergio da Silveira began the presentation of his thesis with a story. As an idealistic young man he had just graduated from the state university in Rio de Janeiro with a major in Portuguese literature. His dream was to go on and get his masters degree in literature, but there was an obstacle. He sensed God calling him to become a missionary.
Sergio chose to follow God and he gave up his academic dreams. For over 30 years now he has been involved in missions, first as a Brazilian missionary to Bolivia, and more recently as director of a program that trains Brazilian missionaries in Bolivia before sending them on to their final destination in Africa or the Middle East.
He told us that this afternoon, God was fulfilling his original dream. He was here to defend his masters thesis, not in literature, but in mission. 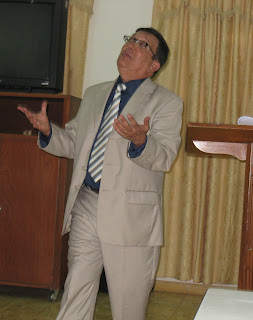 When Sergio speaks, all his Brazilian passion and flare for the dramatic come to the forefront. This was probably one of the most entertaining thesis defenses I have sat through. Sergio doesn’t just speak; he preaches, and although this was a formal academic event, he preached his way through it, accompanied by broad gestures and dancing feet. After he informed us that his research was qualitative and descriptive, based on empirical data obtained from case studies, he paused, then exclaimed, “Isn’t this marvelous?” At another point he explained, “Don’t be alarmed. This is my natural way of talking.” An occasional “amen” and “hallelujah” punctuated the 45 minute presentation, which had to be sped up at the end to include his conclusions. We were all panting. This was followed by 45 minutes of questions from the panel of judges. Sergio’s style didn’t change.
I love the origins of the word “enthusiasm.” It combines the Greek words for “in” and “God,” and one might say it meant, “infused with God.” That describes Sergio yesterday. I know the long road he walked to get to this point and the triumph it represents. Academic propriety can just go out the window sometimes. I didn’t miss it. 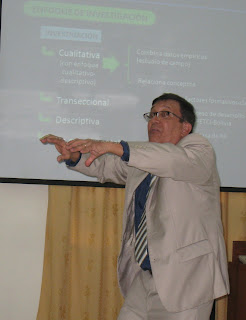 In his research Sergio was evaluating the effects of the intermediary training program that prepares Brazilian missionaries for their future service. He was motivated by the fact that well over half of Brazilian missionaries sent abroad encountered problems so severe they quit and came home before their first term ended. The program Sergio directs places missionary candidates in places of ministry in Bolivia as part of their training, hoping that experience in a culture that is a little different from Brazil will help prepare them for their posts in Africa or the Middle East. In the cases he studied from a 15 year span, over 70% of the 54 candidates were able to persevere in their new posts. Hopefully Sergio’s research will encourage his mission agency to continue this type of preparation.
It certainly encourages us. Hal was Sergio’s mentor and has had to work with him long distance for the past several years. He graduates from the masters-in-mission program we founded and directed at the Universidad Evangelica Boliviana. Even though we are no longer there, it’s good to know that the process works, and that our students are making significant contributions.
Sergio passed his defense. We all went home tired but content. Today he is back to work, full of enthusiasm, one dream accomplished, many others ahead. Thanks be to God. 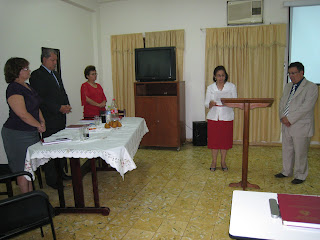 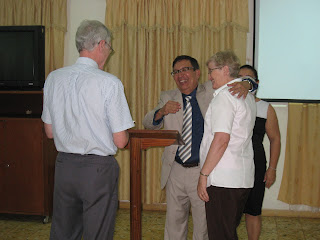 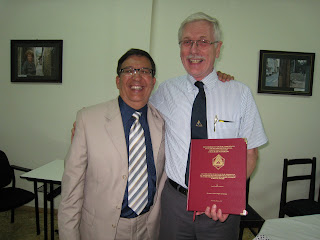