Wrestling the tensions between gospel and culture

Last weekend we presented the first half of the consultation on “The Gospel and Culture in the Aymara Context.” About 60 people showed up to the event held in the large meeting room in the basement of the New Jerusalem Friends Church in La Paz. People are vitally interested in the topic at this time in Bolivian history where the government, led by an indigenous president, is pushing people back to their animistic roots.  How to be an Aymara and a follower of Jesus is not an easy question.
The team of people leading this event have chosen to call it a consultation rather than a seminar or conference, with the idea that we bring people together to share their experiences, reflect on some key passages in the Bible, learn some tools of discernment, and together listen to what the Spirit is saying to the church at this time, in this place. 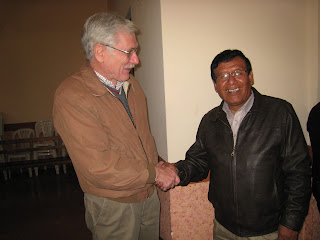 A highlight for me was hearing from Romualdo A. on Friday evening, followed by a question and answer time between him and Hal on Saturday. Romualdo is an Aymara pastor, president of his denomination, and director of a Christian publishing company. He lives in a rural community just outside of La Paz and has successfully juggled being a follower of Jesus with fulfilling community obligations. At one point he was elected “Jiliri Mallku” of the community, the top leadership position. He felt he had to accept, but told people he was a Christian and would not be able to participate in some of the obligatory animistic rituals or share in the drinking (a religious obligation). He did not resign his pastorate, as other pastors have done, but managed to serve his term of office in a way that earned the respect of the community. He has gone on to carry out other civic roles, seeing this as a service to his community.
It’s stories like this that give other Aymara Christians hope. 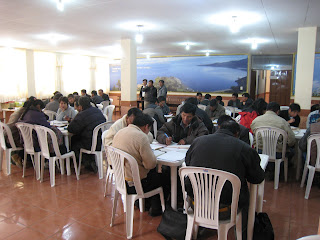 The participants in the consultation are seated at tables and after each presentation, people discuss the ideas in their table groups. These small groups are the heart of the consultation, the place where people talk, apply the concepts to their situations, and do the hard work of theological reflection.
It’s been good so far, but not entirely smooth. Last minute logistical snags, the traditional disrespect for time and schedule, the cold that permeates the meeting room all contribute to a sense of chaos. But I trust it’s creative chaos. Toward the end of Saturday’s all day marathon, one young man stood up and said he was mad, that the consultation was not meeting his expectations, that he needed answers and so far we hadn’t given any. Aymaras are action oriented, so his frustration was not unusual. But we who have planned and prayed and are now leading have deliberately decided not to try and give answers. This may be hard for some to understand. We hope we are providing tools for discernment, helpful information about government laws and guaranteed human rights, biblical insights and testimonies of people like Romualdo who are finding their way through the tensions between Gospel and culture. I think the process is working, but this is hard work. We really need the Spirit to show up. 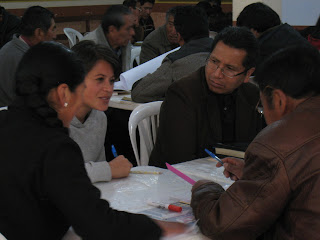 We have this week to continue to prepare and pray. On Friday and Saturday we conclude the consultation. Our prayer is that people will not only have tools for discernment but renewed hope. And a word from the Lord.
Posted by Nancy Thomas at 5:37 AM