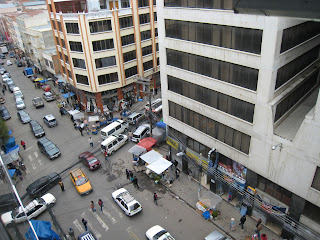 Hal and I have been in La Paz some five days now and are slowly adjusting to the high altitude. This past weekend we participated in the Bolivian Friends Pastors Conference here in the city, with some 70 people in attendance. It was challenging, but I want to write about yesterday, Sunday.
At the conference our good friend Humberto invited us to worship on Sunday in the Villa San Antonio Friends Church. We’ve had close contact with this congregation during the years we lived in La Paz, so we gladly accepted. 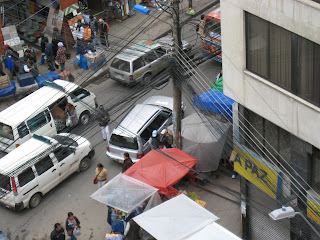 Early Sunday morning we found a trufi (mini-van bus) whose regular route literally took us from the door of our hostel, across the city and up the hill to the very door of the church. (Usually one has to take several trufis to cross the city.) We arrived at 9:00 to take part in a Sunday school class of older people that Humberto teaches. These are Aymara people who prefer using their own language rather than Spanish, and who prefer the old hymns above the newer praise songs. (Sound familiar?) So Humberto taught in Aymara, inviting lots of participation as these wonderful old men and women shared from their experiences of how God reveals himself to them. It’s been a while since I’ve actively spoken Aymara, so a lot of it went over my head, but I reveled in a sense of being washed in the beautiful sounds of this language. There were just a few in attendance at 9:00, but around 30 people an hour and a half later as we concluded.
For the worship service, young people and families with kids filled up the sanctuary. We kept our place among the old ones. After an hour of praise songs in Spanish, accompanied by a small band (that made a very loud noise) and a team of worship leaders, pastor Juan Yapura, another old friend, gave announcements and welcomed Hal and me to the service with words of appreciation and warmth that almost embarrassed us. As if that weren’t enough, after the morning offering and a few more songs, Juan told the congregation that he felt led of the Spirit to take a love offering for us, in gratitude for years of service and to help us in our present ministry. The congregation gave a great “Amen!” So the baskets were passed around. We felt humbled and blessed.
Hal then went up to the pulpit to give a word of greeting. Juan gave him a big hug and then stepped down, and at that point Hal realized he was to give the morning sermon. He had done no preparation, didn’t even have his Bible with him, but that may have all been for the best. He spontaneously shared memories of our family’s relation with the congregation, thinking back to when the group met in a small adobe sanctuary on the side of the mountain until a heavy rain sent the building sliding down the hill. He recalled the miraculous project of the new property, of sharing in the ceremony of laying the foundation stone, of the many trips with elders out to the Lago Norte region to plant new Friends churches (now an established quarterly meeting). He mentioned how important this congregation was to our kids, how the youth group sponsored Kristin’s quinceñera, of all the friendships formed. This was in the context of remembering God’s faithfulness and being grateful. It was quite moving.
When Hal stepped down, Juan invited us both to kneel and asked all the people there to gather around us for a prayer of blessing. Juan led the prayer, using the microphone, while everyone else also prayed aloud, as is the custom. It was a beautiful prayer for our health and our ministry, for David and Kristin, their work and families, full of gratitude. These were no mere words. This was a blessing, real and tangible, a prayer that will make a difference in our lives. After the blessing, one by one, people gave us the abrazo (hug), another lovely Aymara custom.
We hung around a while, visiting with people, taking photos, saying “Goodbye” yet again. Then Humberto took us to a popular restaurant where we each had a huge bowl of chairo, a traditional Bolivian soup full of chuños, vegies and meat, topped by a delicacy called chicharón, actually deep-fried pig fat. (It’s a delicacy I usually skip.)
Looking back at the experience, I’m reminded that generosity and hospitality are core Aymara values. These are magnified when people become Christian. And the affection of these people comes from long years of shared experiences and deep friendship. Yes, we have been blessed.
Posted by Nancy Thomas at 12:41 PM