Green and grounded in dirt: Spirituality and the Arts 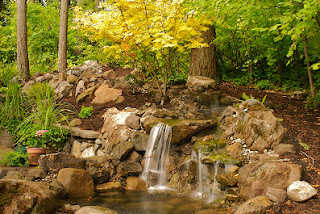 True spirituality engages the five senses and has dirt under its fingernails; this was part of the message of a recent session of the seminar on “Spirituality and the Arts.” Miriam Bock and Phil Thornburg presented from the perspective of landscape artists. Brother and sister, they grew up in Burundi, and the African flora and fauna early formed part of their experience of the life of the Spirit. Phil now owns and manages a landscape company called Winterbloom, and Miriam works for him as a landscape designer.
They demonstrated how art and spirituality join in this profession, a profession where, according to Phil, “Practicality and aesthetics need to be married; but practicality comes first.” He presented the practical side of his art, telling fascinating before and after landscaping stories, with photos, that addressed real problems having to do with such issues as drainage, depleted soil, small areas, etc. But the result, as he puts is, gives the client “art that is not finished but is something that person can step into and become an ongoing partner with creation.”

Phil also brought and demonstrated the four most valued tools a home gardener can own; these included a Japanese hori hori. I definitely want one of these, even those we don’t have garden space in our condominium. I would love to casually mention my hori hori to people, partly because it would be such fun to say.
One of the most insightful moments of the evening came as Eric Bock, part of the audience but also another of his Uncle Phil’s employees, told about how humanely Phil treats those who work for him, encouraging as well as training them and giving opportunities to grow personally and professionally. This relationship has been transformative for Eric. I realized that discipleship can be an art, and that Phil is an artist on more levels than maybe even he realizes. 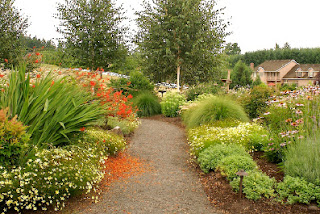 The Winterbloom website contains Phil’s artistic philosophy, as well as photos of his work.
The integration of art and spirituality that Miriam and Phil live out encourages me to appreciate the artistry of the Creator of all this green splendor, and to be grateful for the trees and flowers that draw us closer to our Center.
Posted by Nancy Thomas at 7:32 AM