On being a liver


Peter, age 7, and Paige, 10, were playing Legos in my living room, while I sat on the couch pretending to read, but really listening to them build their imaginary world.

At one point Paige lifted her Lego horse and as it leaped the castle wall, she asked Peter, “Can your Lego guys do this?”
“No,” Peter responded. “Me and Tim don’t do stuff like that. We’re livers.”
Paige cocked her head and gave him that “you’re-crazy” look. “What?”
“Livers.” Peter insisted. “That means we’re normal guys. We don’t do stuff. We just live.”
I smiled and kept quiet. I connected their conversation with the old Martha/Mary division and the differences between people. Some people are do-ers, workers, those who accomplish great—or not-so-great—things for the kingdom. They “work for the night is coming,” knowing that “their labors are not in vain.” Others prefer to sit at the feet of the Master, meditate, pray and just be. They focus on “abiding in the vine.”
This division is, of course, superficial. Most of us move back and forth on a continuum between doing stuff and quietly being present. While we may tend to one side, we’re both types, depending on circumstance and opportunity.
I’m a poet. The noun “poem” comes from the Greek “poema,” and its verb form means, ironically, “to do” or “to make.” The particular making that a poet engages in results, sometimes, in a work of art. Work is on the doing-stuff side, but art leans toward the livers of the world. The combination, “work of art,” brings them together in synchronicity.
This is beginning to sound as silly as my grandkids’ conversation.
At any rate, I’ve added a new meaning to an old word. I’ve got lots of stuff to do today, but I will take the time to remember that I’m basically just a liver. 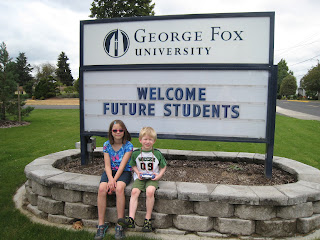 Paige the do-er and Peter the liver