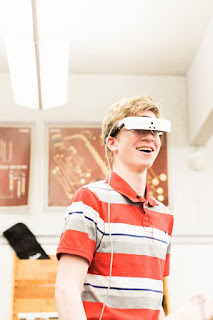 Yesterday afternoon Reilly got his trial eSight glasses and tried them on. It was set up for him to first try them at school, in the band room (his favorite classroom!). But rather than describe it secondhand, I will copy the email we got just from Kristin (our daughter, Reilly’s mom).

“We did it!!!  Reilly tried the eSight glasses, and couldn't stop smiling!  Check out facebook as I posted a lot of pictures.  He was on the news again, and will be again later tonight and tomorrow morning.  It was pretty exciting!  We were in the band room with all his friends, Dave and Pat, youth pastor and his wife (who also took photos as she is the photographer who took our pictures earlier), his band director, and the news.  You could tell when he started to see because he just got this huge smile on his face.  He was kinda quiet just looking all around the band room.  It was pretty emotional.  He started walking around and read some sheet music, looked at posters across the room, zoomed in and read things we couldn't see, etc...  Then we went outside to the courtyard and he stared at the sky and the sunset.  Pretty cool!

“Tomorrow is the Springfield parade and Reilly is to wear his glasses.  I will be following him as he really shouldn't be wearing them for more than an hour at a time as he gets used to them.  It is also supposed to be raining, so he may not be able to wear them very much.

“Will keep you in the loop and wish you were here, but know you will be experiencing his sight soon enough when you come!

We both cried. Imagine the miracle of sight, immediately given. Today he plays the snare drum in the marching band. I wish we could be there, but we certainly feel the joy. Thanks be to God.

Here are some of the photos Kristin put up on Facebook. 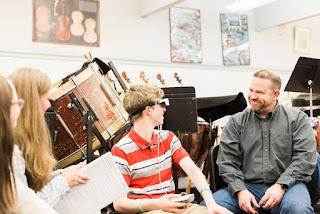 With his mom and dad 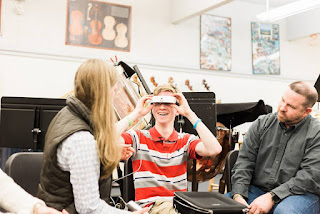 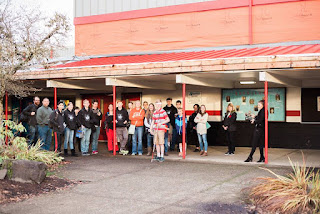 In the high school courtyard 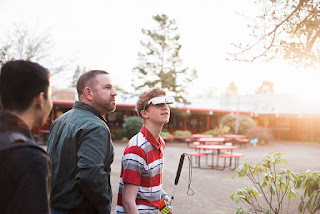 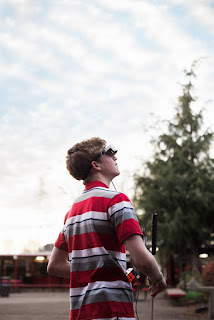