PNWQWTC—now that’s a mouthful of letters that almost defeats the purpose of acronyms. Its meaning is equally impressive; it refers to the Pacific North West Quaker Women’s Theology Conference, another mouthful. The trick is to say it all without having to stop for a breath.
Actually, I was quite impressed, and I found myself frequently stopping to take a breath, wanting to absorb everything. It’s now been several weeks since my participation in the conference. I arrived with great anticipation, but not knowing what to expect. Although these conferences have been happening every two years since 1995, this was my first time. 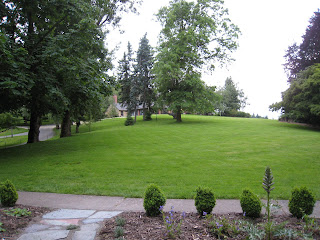 On June 13-17, 2012, 62 women mostly from the North Pacific Yearly Meeting (unprogrammed) and North West Yearly Meeting (programmed) gathered at the Menucha Conference Center in northern Oregon, overlooking the Columbia River. We spent the time listening, talking, eating and playing together around the theme of “Inviting, Contemplating and Enacting Grace.”  Highlights for me included the following:
--Making new friends. I was worried my natural shyness might kick into full force among so many people I didn’t know, but something about this particular gathering encouraged openness and honest interactions. I not only made new friends, I found some kindred spirits.
--Listening to the Spirit speak through so many people. Each day considered a particular aspect of grace, with two plenary speakers, and enough time to hold the words in the silence and respond verbally. I felt my understanding of and appreciation for God’s amazing grace expand. 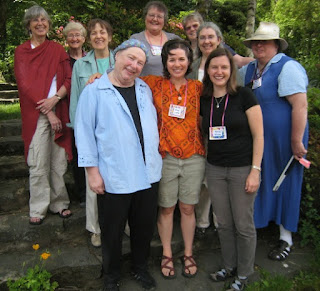 --Home groups. We were all carefully placed in small groups that met every day to further discuss the topic, get to know one another, share needs and dreams, tell stories, pray, and, in the case of my home group, laugh. A lot. I loved the way we learned to move gracefully between laughter and silent waiting.
--The place. Not only the comfortable accommodations and good food, but the natural setting nourished me. Every day I was able to get up early, walk alone in the woods, and watch the sun come up over the Columbia River. 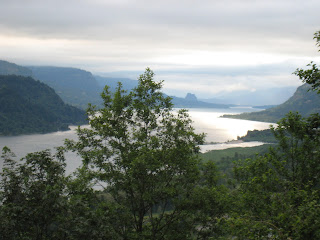 --Getting to contribute. I was invited to give the Sunday sermon, and I was led to talk about gratitude as our response to God’s grace. I feel renewed to live my own life in a spirit of gratitude.
In one of the times of evaluation, a woman expressed a concern that we not use the word “theology” for the conference, that it made it seem too heavy and ponderous for what we were experiencing. While I respect her opinion, I couldn’t disagree more. As we brought together our stories with words from the Scriptures, as we reflected and argued (just a little), discussed and waited in the silence for a word from the Lord, we were God’s people, doing the work of theology.  If at times it seemed more like “the play of theology,” right and good. We’re learning to know God together, to grow in our relationships with God and with each other, and trying to find a truer articulation of our faith, despite the differences among us. In fact, the very differences serve as a creative catalyst for more honest reflection, and give a context for love to grow. This is, indeed, “doing theology.”
Posted by Nancy Thomas at 10:22 AM