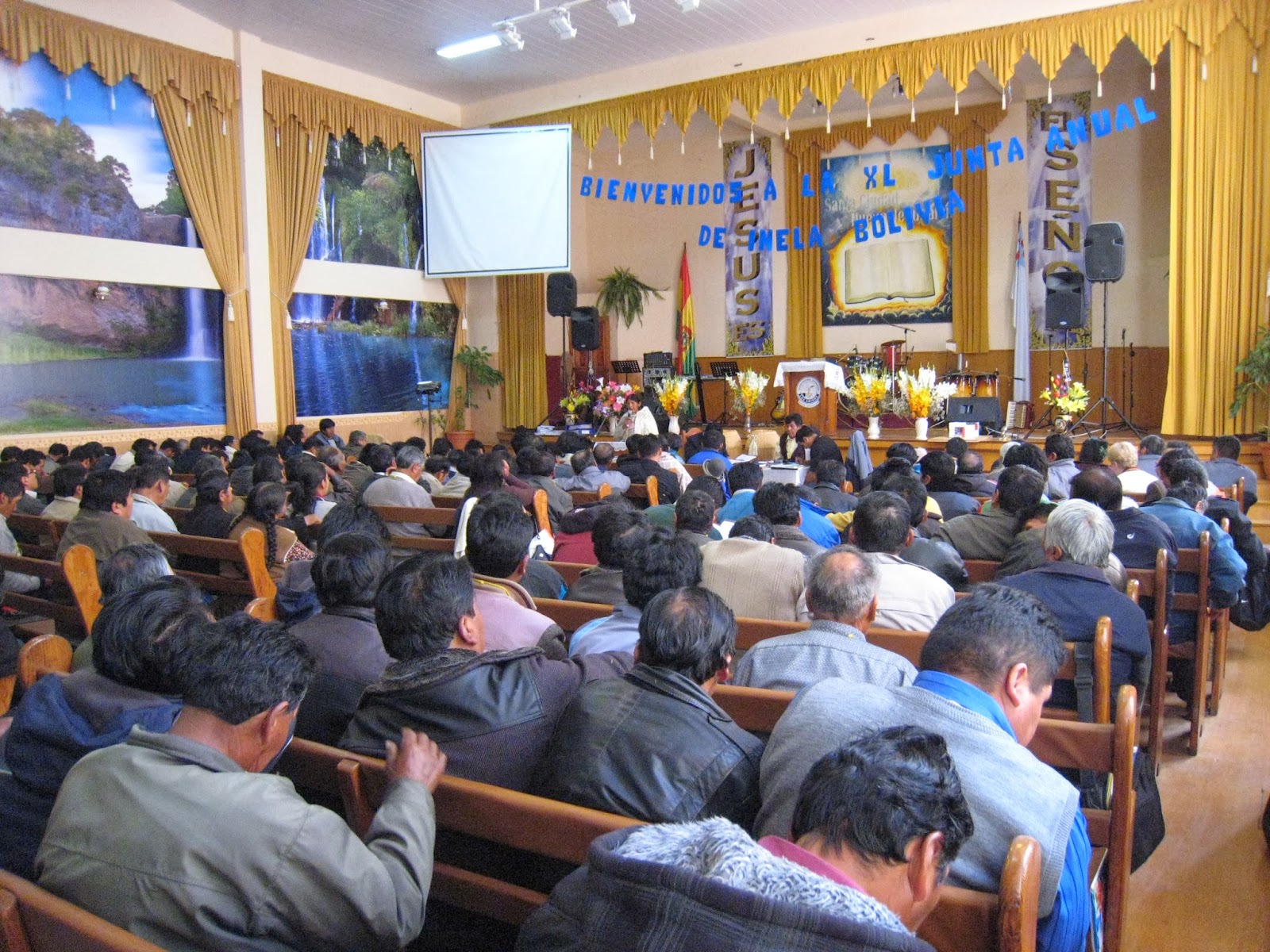 Bolivian Friends (INELA) concluded their 40th yearly representative meetings on Sunday of this week with celebration, food and the commissioning of a group of eight young people on a missions trip to the interior of the country. More than 280 people, representing all of the 14 districts of the church gathered in La Paz for these annual meetings. Here are some of the highlights of the four very intense days of reports, deliberations and worship.
--The high level of participation in the sessions illustrates the wide horizontal level of leadership throughout the yearly meeting. In addition to reports by the president, the two regional superintendents, the secretaries of education and mission, the presidents of the women’s and youth organizations, and the leaders of various commissions, each of the presidents of the 14 districts of the national church presented their annual report. Each report was followed by questions and discussion, often heated. That’s a lot of reports. But careful listening yields a good overview of what is happening on the ground level of the church.
--Outgoing president, Daniel Limachi, reported on his trip last year to visit Quakers in Indiana and Pennsylvania. One thing that impressed him was that meetings started on time and strictly followed the agenda. He referred to this at least once every day, admonishing, “Hermanos! We need to be like them! We must start on time!” Every day the doors were closed and locked ten minutes after the meeting started (usually late) and late comers were made to wait outside 15 more minutes. When the doors opened, the tardy ones had to march down to the front to be scolded, then pay a penalty by singing a song to the rest of us. Fortunately, most people, including the time-criminals, thought the whole thing funny. I don’t think Daniel did, but he made his point.
--I learned that three new congregations had been planted in the Cordillera District, and three more in the Santa Cruz Department in 2013.
--Two controversial items involved financial mismanagement in one area, the details of which I won’t go into, and the difficulties of bringing the yearly meeting constitution up to date with new government requirements being imposed on all religious institutions. Again I won’t go into detail. People wrestled with both issues and came to some good decisions about how to move forward. The church is not perfect, nor are her leaders. But God is faithful.
--Hal gave the first annual report of the new commission for the history project. Many questions and comments followed, with a good sense of support and enthusiasm.
--For me the great highlight of the meetings was what I consider to be a move of the Spirit toward a new emphasis on missions. Not that missions is something new; it’s been building for many years. But it feels like this may be the kairos moment for a new expansion with a wider support base. The secretary of missions reported on the four missionaries the church is currently supporting, people who are planting new churches in different areas of Bolivia. José Sosa from Argentina came and spoke about the new church plant in Buenos Aires among Bolivian emigrants, begun by visits from Bolivian Friends. Many expressed interest in supporting this new work by sending an INELA missionary. More energy was generated around INELA’s future in missions than any other subject presented during the sessions.
The representative meetings are over for this year. New INELA president Timoteo Choque is gathering his team and making plans. As a favorite hymn here affirms, “The church keeps walking forward” (“La iglesia sigue caminando”). 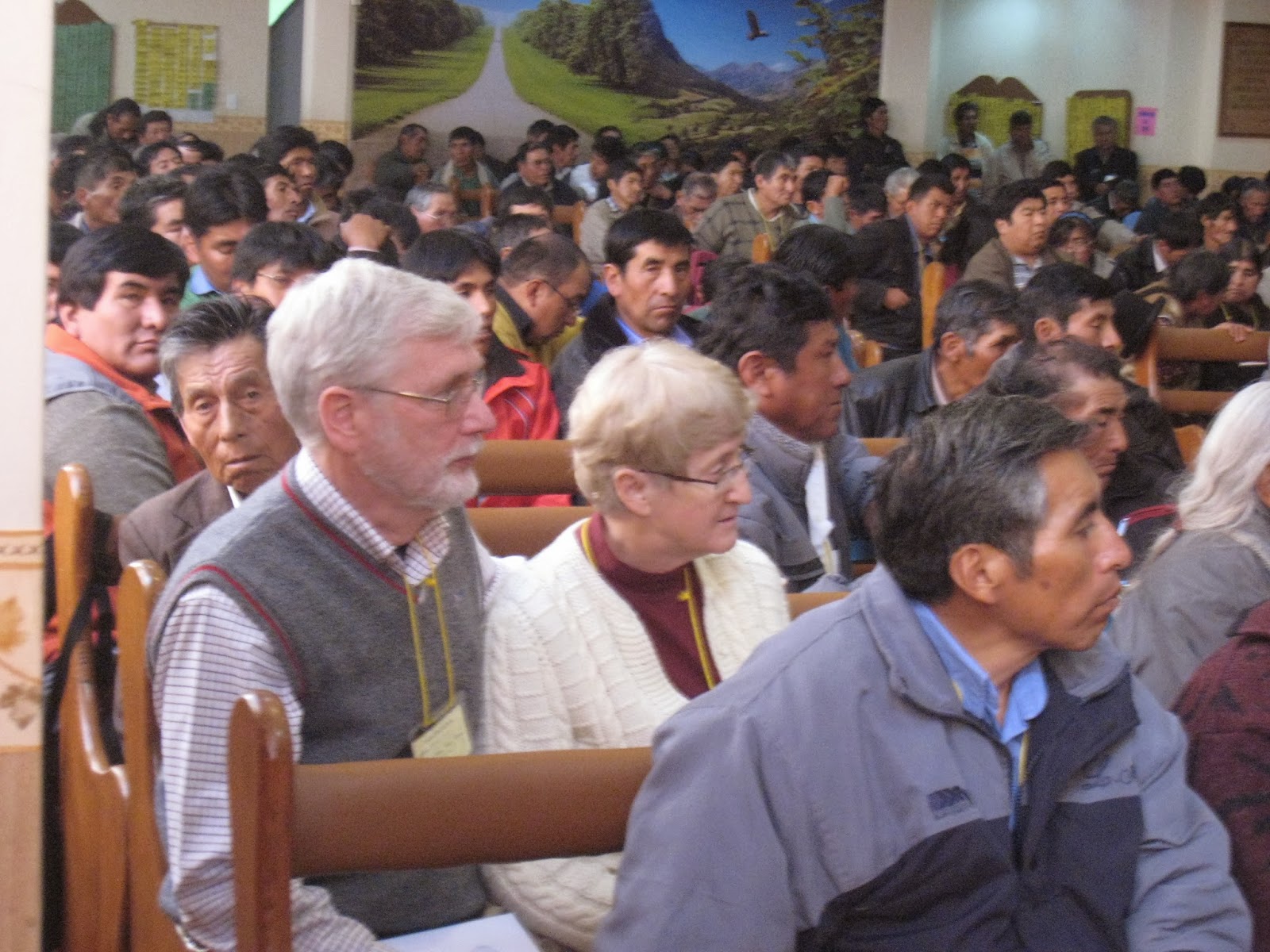 Silver threads among the black! 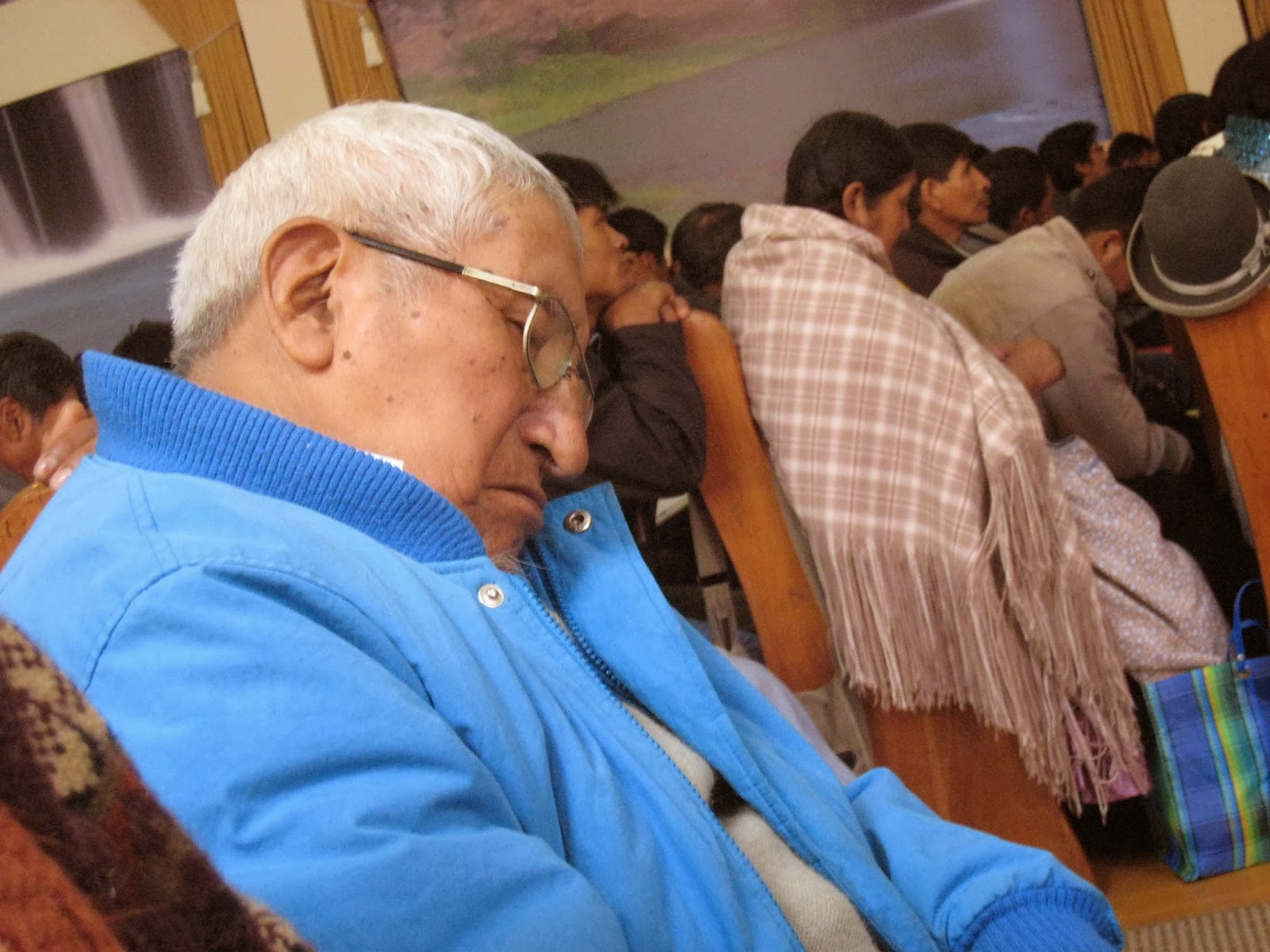 Pascual Quispe responds to a long report (as I did, several times). 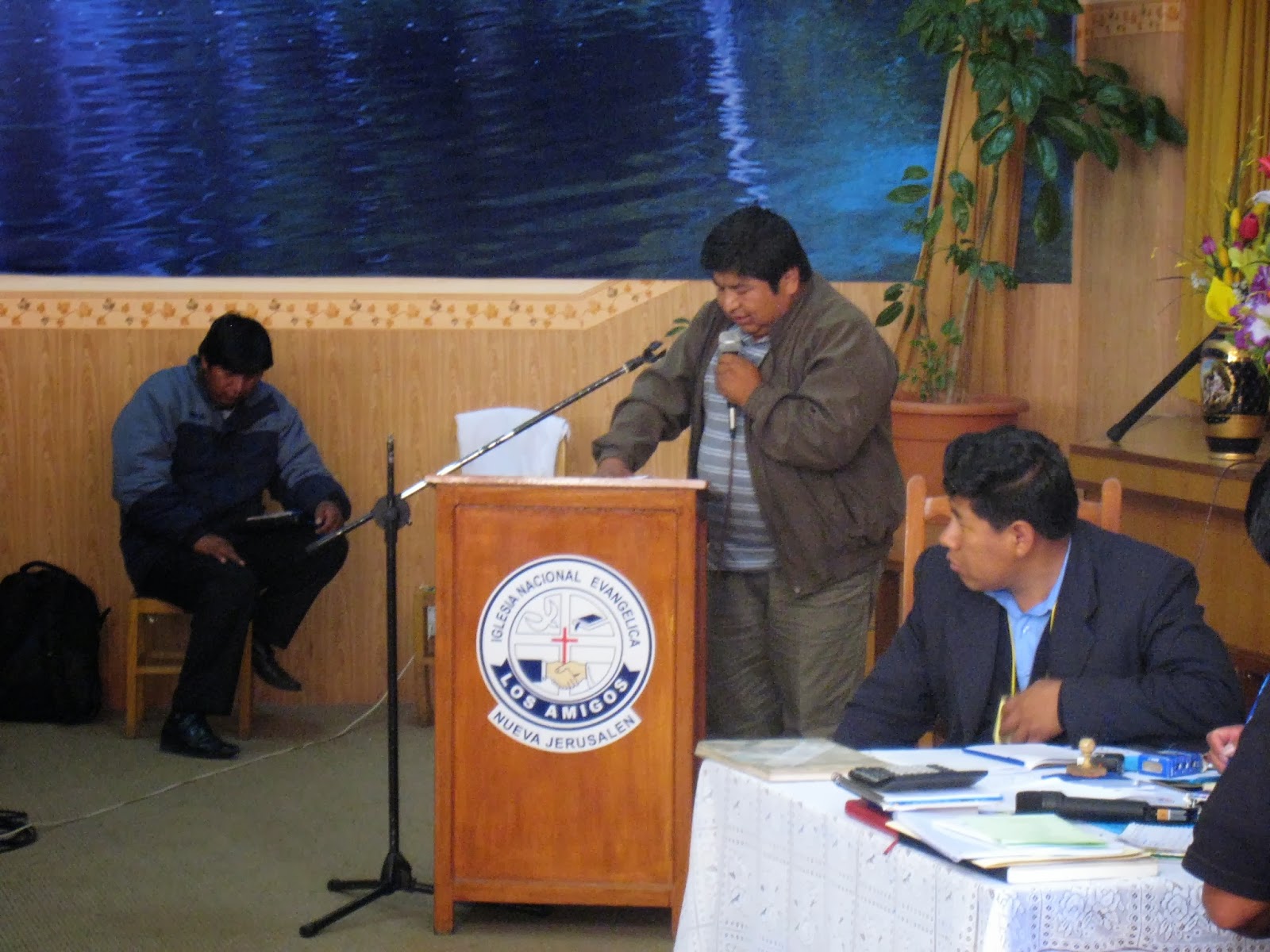 José Sosa speaks about the new congregation in Buenos Aires. 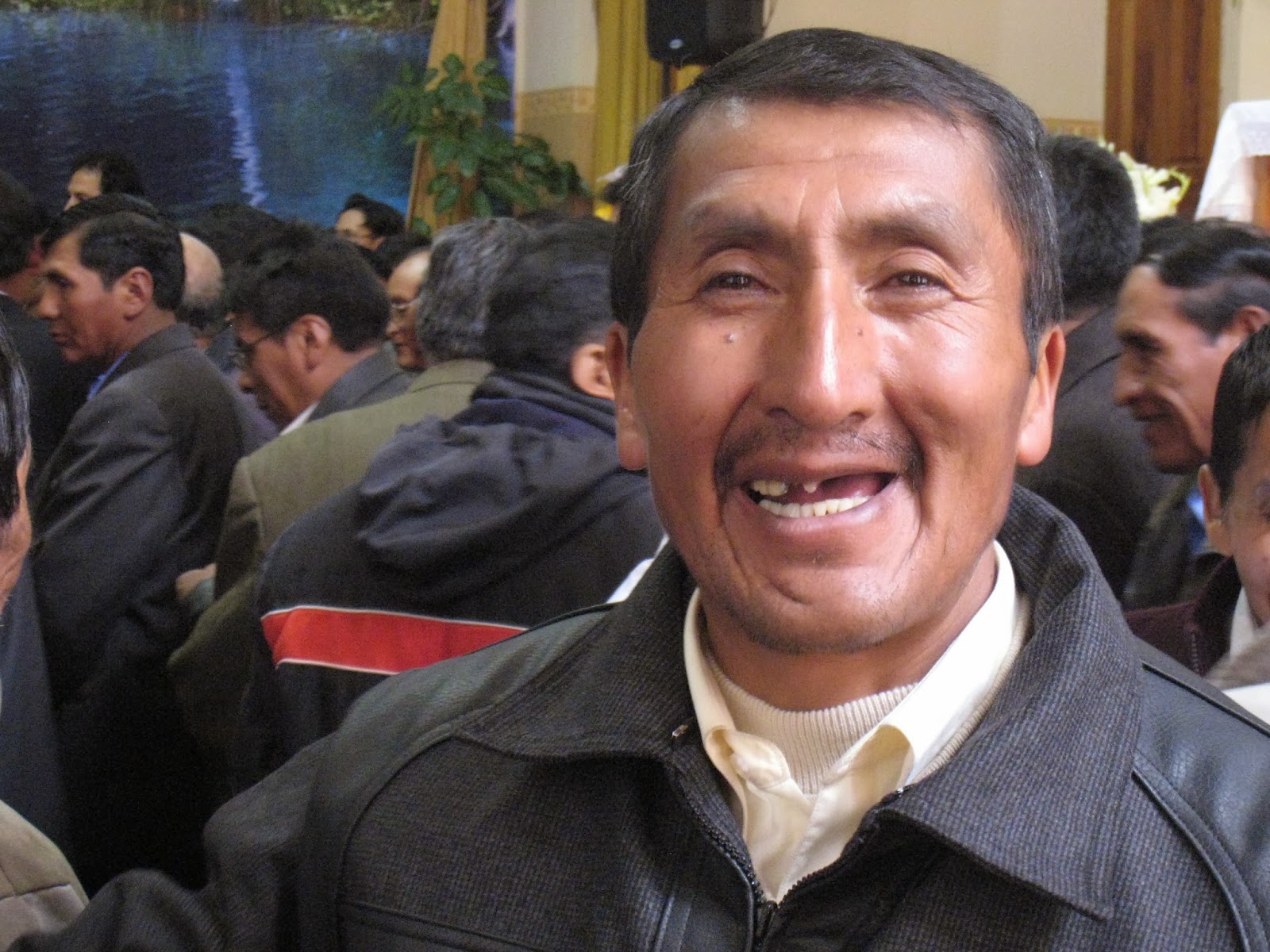 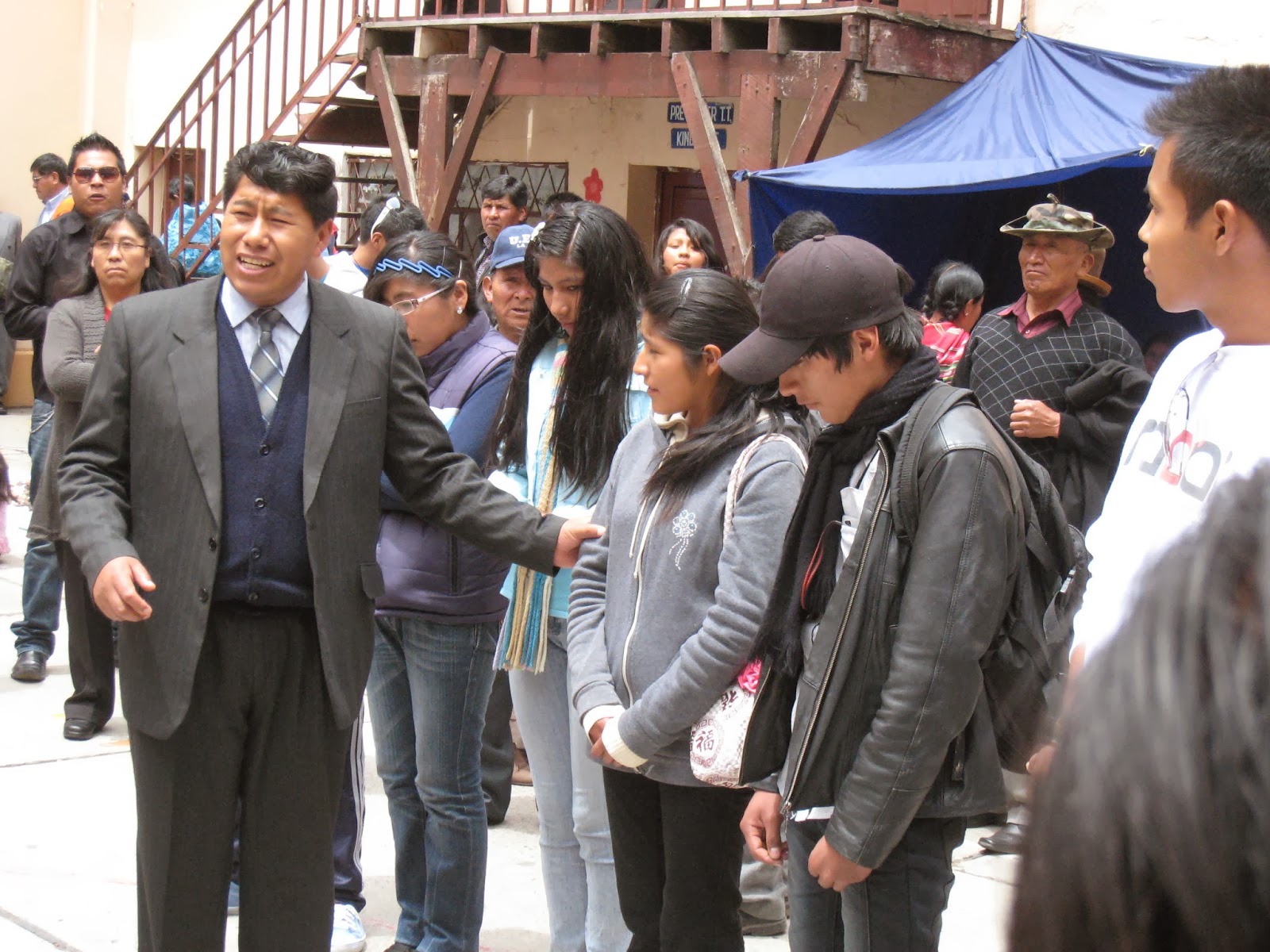 Commissioning the young people for their short-term mission trip
Posted by Nancy Thomas at 2:44 PM