1919, a year of convergence in Bolivia

William Abel was not the first known Quaker to visit Bolivia with the intent to share the gospel message. That honor goes to Florence Smith, a recorded Friends minister and Bible teacher from Kansas Yearly Meeting. She had met Abel in the Training School for Christian Workers, probably in 1913, his first year back from the Philippines. The school had invited her to be a teacher, and she served for the 1913-1914 school year. Abel would have been one of her students.
Smith’s passion was evangelism, so she left the school after only one year to pursue a ministry of preaching. We lose track of her activities but discover that sometime around 1917, she traveled to Bolivia as an independent missionary, and found employment in La Paz teaching English.
William Abel graduated from the school in 1916, and after several years working to pay back his school debts, he renewed his relationship to Peniel Missions, the agency that had sent him to the Philippines. Peniel assigned him to Bolivia, apparently to work in a newly established mission farm on Lake Titicaca.
Travelling by boat and train, Abel arrived in La Paz sometime in March 1919. While waiting for the right time to move out to the farm, he occupied himself with selling Bibles (a typical missionary activity of the times) and preaching on the streets of the city. We don’t know when or how he reestablished contact with Florence Smith.
But Smith was definitely active in persuading two other Quaker missionaries to come to La Paz in 1919. The Union Bible Seminary in Westfield, Indiana had been actively looking for a mission field, and partly through Smith’s persuasion, they commissioned two young Quaker women for that work. That very year Emma Morrow and Mattie Blount traveled together and were met at the La Paz train station by Smith. The month was May. The three women began exploring what form their mission work would take. Although their Spanish language skills were largely lacking, the women soon joined forces with William Abel and began preaching on the streets of La Paz. 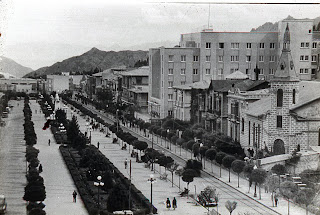 On August 21, 1919, Morrow wrote home a description of a three-week series of street meetings where the four ministered together, after having obtained an official permit from the local government. Morrow wrote that,
“We have been out in the ‘Prado,’ one of the main streets of the city every night except two since Aug. 8th, and during that time hundreds of people have heard the Gospel. I believe there has been an average of a hundred people each night that would stand for a full hour, and sometimes longer, to listen, while many came and went, and the attention has been remarkably good….
“We have given away thousands of tracts and have sold 100 New Testaments during the three weeks…. Mr. Able [sic] and Florence Smith do the preaching, and Mattie and I pray and help sing.”
Abel apparently made several converts and influenced several other young Christians, among them Juan Ayllón, a young mestizo Christian. He joined with Abel in the street ministry and was deeply influenced by Abel’s spirit and zeal for the work.
Upon his arrival in La Paz, Abel had written home, “I have a strange feeling that somewhere around these parts I shall end my days.” And, indeed, William Abel died of small pox only eight months after his arrival, on October 12, 1919. Ayllón and Morrow cared for him in his final illness, and Ayllón arranged for the funeral and burial in La Paz. The verse on the marble slab marking his niche reads, “Whether living or dying, I am the Lord’s.”
Ayllón would take up Abel’s mantel in the years to come. Today the Bolivian Friends Church (INELA) considers both Abel and Ayllón to be its founders, Abel’s sacrificial death being the seed of the church (John 12:24).
But the year 1919 and the convergence of Friends missionaries from different yearly meetings (Kansas, California, and Indiana) would prove to be the foundation of all the Quaker work that would later grow up in Bolivia. These would eventually find expression in the different Bolivian yearly meetings, the largest being the Bolivian Holiness Friends, the INELA, and Central Friends. They all date back to three hardy young Quaker women, one Indian Quaker from California, and one young mestizo convert, preaching on the streets of La Paz.