After graduating from the 6th grade and while making his living in Ramona as a butcher, William Abel joined with other young men his age and began experimenting with liquor and wild living.
Simultaneous to Abel’s experiences in Ramona at the end of the 19th century, the Ramona Friends Church was founded (1883) and recognized as a monthly meeting in 1892 under the Pasadena Quarterly Meeting. At the time it was the only church in town. William Abel seems to have ignored the existence of this little meeting up until 1897.
In September 1897, Levi Gregory, superintendent of evangelism for California Yearly Meeting, held a three-week series of meetings in the Ramona Friends Church. Somehow, William Abel found himself in one of these meetings. Twenty conversions were reported at the end of the three weeks, and these included one surprised William Abel. There are various versions of his conversion experience, but we’ve yet to find one in his own words.
Subsequently these meetings were referred to in the documents as “the Ramona revival,” and the excitement seemed to go on for at least three years. A report written in 1898 notes that, “We frequently have overflow meetings…. No time for preaching but spontaneous prayers, praise, and testimonies, and hands raising for prayers. Oh, such wonderful love!” Concerning an offering for a new parsonage, the same report goes on, “One Friend put in fourteen acres of grain for the Lord’s work. Another gave the use of twenty acres and plowed it…. A Methodist gave a horse, a young Mexican who was converted at the revivals gave $5.00. Some tithed, others gave work, etc., etc.”
The generous “young Mexican” was probably William Abel. It’s interesting to note that $5.00 would have been his annual wage several years back when he worked as a goat-herder. Abel’s conversion was genuine and the following years found him still among Friends at Ramona, maturing as a new Christian. Abel was around 27 years old at the time of his conversion.
In 1900, Abel moved to Whittier, California to enroll in the new Training School for Christian Workers, a Quaker sponsored offspring of the holiness movement sweeping through the country. (This school would one day evolve into Azusa Pacific University, but that’s another story.) Abel was deeply impacted by his experiences at the school, including contact with Quaker prophet Amos Kenworthy and China missionary J. Hudson Taylor, both speakers at the school. He participated in different ministry opportunities when not in classes, including speaking in different Friends churches. Quaker missionary to Alaska, Dana Thomas, remembers “seeing many large audiences composed of cultured, intelligent people, who were moved in a wonderful manner by this simple native. He was a true Friend, refusing to address meetings where he did not feel the Spirit’s leading.” 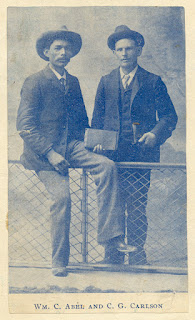 In 1902, Abel cut short his studies and volunteered with Peniel Mission. Peniel sent him and a man named C.G. Carson to the Philippines where Abel served for the following 11 years. The few letters he wrote home give scant details of his work as a Bible colporteur and a street preacher. The work was hard, and at the end of these years (1913), Abel returned to California, weakened by malaria and sensing the need for further training. He enrolled again in the Training School for Christian Workers, this time graduating with the class of 1916.
After working in the greater Los Angeles area for over two years to repay his school bills, William Abel was ready for his next missionary adventure. This time the destination was the highlands of Bolivia.  (To be continued.)
(An additional personal note: Several discoveries linked this investigation to us, personally. One surprise was the role that the town of Ramona played in the story. I, Nancy, grew up in Ramona, attended the same elementary school, and found Jesus in the same Ramona Friends Church. The other discovery came as we found the 1916 graduation class photo for the School for Christian Workers. Of the eight graduates, Abel is the tall man in the back row. The young woman second from the left in the front row happens to be my husband’s grandmother. Both Hal’s grandparents, Clyde and Mary Kellogg Thomas were school mates of William Abel.) 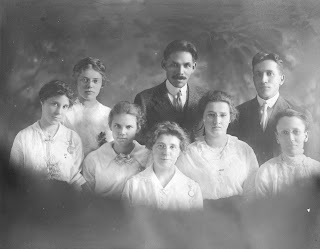