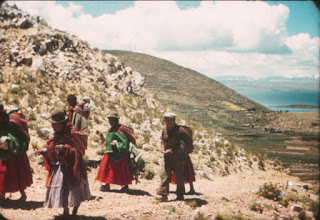 Last Sunday Hal and other members of our history team went out to Amacari, a village on the shores of Lake Titicaca and birth place of the first Friends church (INELA) about 100 years ago.
(The photo is of believers from Amacari--the village is in the background--in the 1930s or 40s.)
The actual story of this congregation is mired in the mists of oral history. Different descendants of the original group each have their own version of how it all got started, as told to them by their grandparents. The events take place sometime between 1915 and 1924. As historians our strategy has been to collect all the stories, then try to identify the similar threads and arrive at a reasonable explanation of what might have happened.
Last week Hal and I celebrated Thanksgiving Day with some old friends (and Friends), Bernabé and Flavia Yujra. They actually live on land where the mission house once stood. Now three generations of the Yujra extended family live in various houses clustered around the large sunny patio. 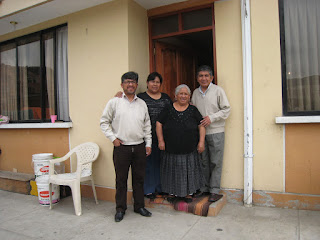 Bernabé happens to be the grandson of one of the original Amacari believers, a man with the Old Testament Babylonian name of Baltazar Yujra. Bernabé told me a version of the Amacari story I hadn’t heard before. (I have three basic versions, with multiple variations.) He says his grandpa told him the story directly.
According to this version, a foreign missionary showed up in Amacara around 1917 and stood in the plaza playing his violin. But what attracted the people more was something he carried in his little medicine bag—flea powder! He told the people to sprinkle some in their beds to take care of their flea problem.
They did and it worked! The fleas all died (and, thankfully, none of the people did). People felt so grateful they were open to listen to the missionary’s message. Several converted and so the church was born.
This version of the story is so different from all the other versions—it has none of the similar threads that weave through the others—that, if I include it in the history book at all, it will probably be as a footnote. It makes me wonder if old Baltazar had a sense of humor and a healthy imagination, if he might have been pulling his grandson’s leg a bit. (He told a completely different version to another grandson whom we had previously interviewed.)
Well, I do have a healthy imagination, so I’ve tweaked the story further. I’d like to envision this fiddling missionary standing in the plaza, playing a Viennese waltz. Throughout the village, all the fleas wake up, enchanted by the music. They all crawl out of the beds, out the doors of the adobe huts, and make their way to the plaza. The missionary then turns and slowly walks out of the village, playing his violin, while a stream of fleas follows him. The villagers, thrilled at this miraculous liberation. all convert to Christianity and, thus, the church in Amacari is born.
(I won’t include this version in the book, not even in a footnote.)

Back to Amacari last Sunday, 2017. The brethren were glad to receive so many visitors, including members of the executive council of the denomination and representatives from the New Jerusalem Friends Church in La Paz—all determined to celebrate this milestone.
Actually, the Amacari Friends Church is still very much a rural community, and the people aren’t too wrapped up in dates and timelines. They hadn’t realized they were celebrating their 100th anniversary. (And the date, 1917, is somewhat arbitrary. People back them didn’t pay much attention to dates either.)
But, hey!, everybody loves a party. And celebrate they did!
Happy Anniversary, Amacari Friends Church!
One final observation: The fleas are back, but the church goes on. 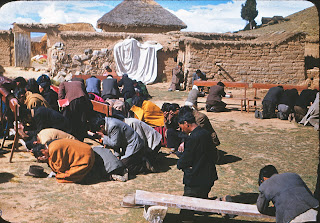 Amacari believers at prayer in the 1940s 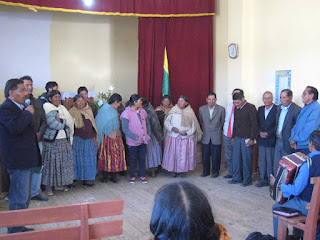 Celebrating their 100th anniversary
Posted by Nancy Thomas at 6:59 AM